Editor’s Pick: The Thoughts and Happenings of Wilfred Price, Purveyor of Superior Funerals by Wendy Jones 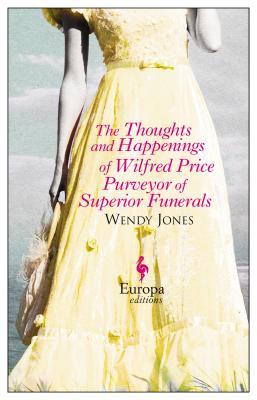 Wilfred Price has established himself as a respectable, reliable member of his small and tightly woven rural community of Narberth, Wales. He performs his duties impeccably as the town’s undertaker, conveying a sense of calm and propriety. A momentary lapse of judgment, just a few unguarded words, manages to propel Wilfred into a life he doesn’t want and can’t quite manage to get back under control.

The unfortunate utterance of the wrong words and, at times, the complete inability to say anything at all plague Wilfred. He attempts to gain some mastery over his speech and solve his dilemmas by purchasing and memorizing a dictionary, albeit a used and somewhat mildewed dictionary. He intends to expand his vocabulary, enhance his standing as a learned man-about-town, and find the answers to all his quandaries. He becomes adept with a host of words beginning with “a” but never quite seems to progress to the “b” section. Although he may be clueless when it comes to verbal communication, his internal observations and “conversations” with his departed clients are thoroughly entertaining, utterly charming, and filled with a gentle good humor.

Even the most well-intentioned soul may run into trouble when he encounters some of the more sobering realities of life. Wilfred is no exception to this rule, and he is forced to confront a dark secret that has the potential to destroy his life, ruin his future, and wreak havoc in his community. He has to make a number of painful choices that seem to have no clear way to an entirely good outcome. It seems that his ability to speak the truth and gain a much-needed maturity will come at a tremendous price.

Author Wendy Jones examines the construction of an insular community, exposing both its strengths and flaws. As long as certain rules are met, the members share a sense of belonging, a feeling of security and continuity. The danger of transgressing the boundaries of proscribed behavior bears the threat of expulsion from the society. This crossing of boundaries lends a tension and energy to what otherwise might be a light romantic comedy of manners. While the people inhabiting Narberth have their share of sweet romance as well as the pure misery of disastrous marriages and relationships, Jones skillfully demonstrates that life is made up of varying measures of both joy and pain. Her characters are delightfully drawn, lovingly described, and infused with life that transcends the printed page.