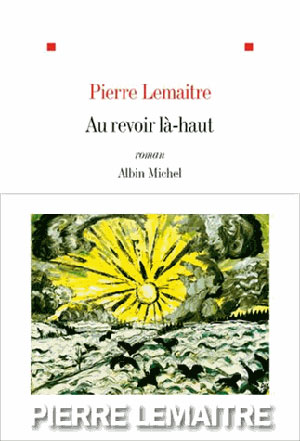 The title of Au revoir là-haut (Goodbye until we meet in heaven) comes from a letter written by a soldier just before his execution for treason in 1914. It is a sign of the emotions that permeate the book. Awarded the 2013 Prix Goncourt, Au revoir là-haut portrays a society that wants to honor the dead but also forgets the living veterans. In its use of slang and its fast-paced style, it is closer to Lemaître’s earlier work (a number of best-selling detective novels) than to most prizewinning novels.

There are two linked stories, both beginning November 2, 1918, just before the armistice. Henri d’Aubray-Pradelle, an unscrupulous lieutenant, hopes to promote his own career by ordering his men to attack the Germans. He chooses the youngest and the oldest soldiers in his battalion to start the attack, then deliberately shoots them in the back to make the rest of his soldiers advance. Two of the soldiers—Albert Maillard and Edouard Péricourt—are aware of Henri’s action, but they are both badly injured. Buried in the ground, Maillard is saved from death when Péricourt jumps on the body to keep the heart working. At this moment, Péricourt is hit by a shell that almost destroys his face.

An artist and the son of a wealthy businessman who he feels dislikes him, Péricourt refuses to be identified officially by the army. Maillard helps him start a new life under an assumed name. The pair live very poorly; Péricourt’s injury prevents him from going into public; Maillard works as a sandwich man on the streets. Henri Pradelle, however, prospers. He has married Péricourt’s sister and joined fashionable society. He arranges to build a series of necropolises to bury the war dead, a clever but immoral scheme in which the dead bodies are not properly identified, often having been put in shabbily constructed coffins by Chinese workmen who cannot read. Péricourt, realizing the desire to honor the dead, produces drawings for a series of statues, inventing a society that will make the statues and sell them. His father, now ashamed of how he had treated his son, whom he thinks dead, agrees to buy one of the statues.

The plots are developed in alternating chapters, which keep the reader in suspense. Henri’s criminal action (based on a real event after the war) is discovered, and he is dishonored and imprisoned. Maillard and Péricourt succeed in selling the supposed statues and take in a million francs. Maillard waits in vain for his friend to join him but then leaves to start a new life in the colonies. Péricourt, increasingly disturbed, runs into the street wearing wings he has made. His father, having discovered the whereabouts of the artist who drew the statues, arrives just in time to run over his son, whom he recognizes at the last moment.

In Lemaître’s story of France in 1920, there is only tragedy.