Breaking the Jaws of Silence: Sixty American Poets Speak to the World 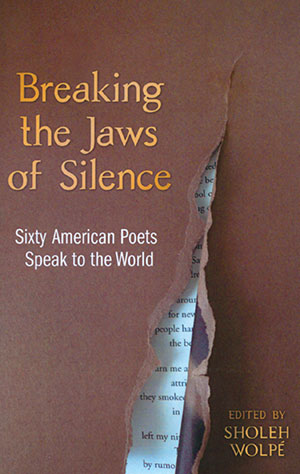 This collection transforms the motto e pluribus unum into verse. Iranian American poet Sholeh Wolpé brought together sixty American poets in the poetic tradition of protest. Like a crystal hanging in the sun, they reflect and refract the principles of freedom and human rights in myriad directions. Furthermore, each of these poems is offered as a gift; the proceeds from this anthology will benefit PEN Center USA’s Freedom to Write program.

Wolpé has established her own work as a fearless poet in three collections, including Rooftops of Tehran. Both her aversion to oppression and her ability to juxtapose the dark and wondrous are reflected in this anthology and also in her dedication to PEN Center USA. PEN International is dedicated to human rights and campaigns on behalf of writers who have been censored and imprisoned around the world. This poetry responds by bearing witness to oppression.

Every piece in this anthology situates the poet in a world at war with its citizens throughout history and around the globe. They seek to expose both tyranny and tarnished examples of liberty: the bloodied, ill-fitting coat of General Washington, the “stained cheeks” and “weathered plumage” of Lady Liberty who wanders the streets of New York, the ghosts of Tiananmen Square, and the protesters in white shirts “on the other side of the world.”

However, these poems also ex-plore the ambivalence of American responses to brutality. It includes poets like Kim Addonizio, who is skeptical of America’s ability to sympathize with and support international struggles for human rights. She juxtaposes her ride to the gym with newspaper headlines about genocide around the world, forcing readers to consider their own reactions to collections like Breaking the Jaws of Silence.

Wolpé wraps up the collection with an afterword: “I Didn’t Ask for My Parents.” She examines the accident of our birth and the role it plays in our political and religious alliances. Her poem highlights the arbitrary nature of the affinities and rivalries that shape the world. She concludes with the provocative question: “Who has salvation / when we all claim it?” Breaking the Jaws of Silence is a chorus of American voices speaking out against a dark world with the power of verse.