CO-MIX: A Retrospective of Comics, Graphics, and Scraps by Art Spiegelman 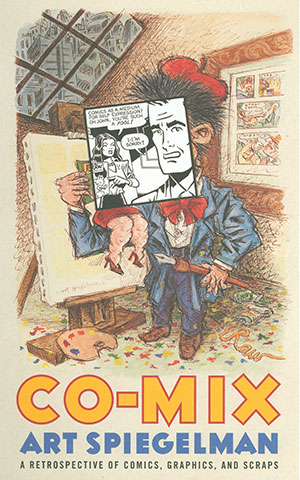 For the reader who first heard about Art Spiegelman with the phenomenal success of Maus, CO-MIX is evidence that he had been creating original and provocative art for many years before the two-volume Pulitzer Prize winner. His body of work has a rich provenance, for Spiegelman is a scholar of illustration, comics, and the counterculture, as his drafts and finished work show. But this volume does much more than trace Spiegelman’s history: it offers myriad pleasures for the fan and about-to-become fan. Published concurrently with an exhibition at the Jewish Museum in New York, the book provides almost as much pleasure as walking through the retrospective and includes the added benefit of inviting many revisits.

There is a treasure trove of rich material here, from the incisive J. Hoberman introduction, “Drawing His Own Conclusions: The Art of Spiegelman,” through early examples of the artist’s work such as Short Order Comix through RAW, on to Maus and finally to the New Yorker covers, his recent forays into book covers, collaborations with the dance company Pilobolus, and painted-glass windows for his high school alma mater, New York’s High School of Art and Design. As Hoberman says, “Over the course of four decades he has given a new meaning to the term comic-book artist—or perhaps it would be more accurate to say that Spiegelman has given new meaning to the terms comic book and artist.”

Spiegelman is often a character in his work, as in Maus, and usually not in a self-congratulatory way. A lovely two-page comic from 1993, “In the Dumps,” has him strolling in the woods with Maurice Sendak, and, naturally, he gives the great lines to Sendak. He pays homage to several of his influences over the years, but the sensibility is uniquely Spiegelman. At every turn, his work surprises, engages, and is alternately zany and incisive, sometimes at the same time, a truly difficult balancing act to maintain.

It’s no surprise that much of the work featured is rather provocative—who can forget his New Yorker cover of the Hasidic man kissing a black woman. Spiegelman has not focused on creating for a genteel audience, for the most part. But then there is commercial work as well, for he created the Garbage Pail Kids for Topps. His 1994 work The Wild Party, based on a 1928 poem by Joseph Moncure March, uses a combination of techniques to produce a blend of expressionism and film noir on the page. His range and areas of interest are vast.

This large-format book, brilliantly produced on high-quality stock, invites the reader to linger over each page. It is a testament to the fact that Spiegelman has indeed redefined what comic book artistry is all about.