Down Among the Fishes by Natalka Babina 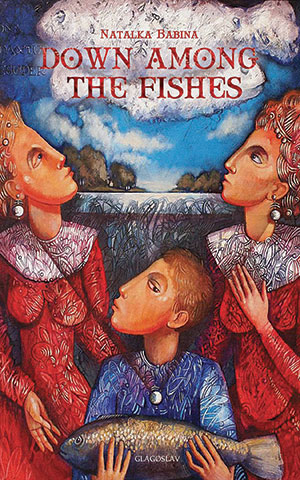 Natalka Babina’s Down Among the Fishes has all the charm of a bad adventure novel. Any aspirations of literary merit fall by the wayside in its gleeful and unabashed pursuit of entertainment value. The novel’s heroine, Ala Babylyova, is living a relatively peaceful life in her Belarusian village when, suddenly, the mysterious death of her grandmother launches her into national and international conspiracies involving opposition politicians, thugs, buried treasure, and even time travel. Babina doesn’t waste too much time on her characters’ motivations or on the internal consistency of the world she creates. Instead, she packs the novel full of exciting subplots, cases of mistaken identity, and visits from ghosts. By the end, all the wild strands of Ala’s adventures do not neatly resolve into anything coherent, nor do they seem to be commenting on any of the genres they imitate. They exist, it seems, for no other reason than to keep the reader entertained.

In this, Babina succeeds. And by the time the book is finished, its unrestrained gimmickry has kept the reader’s attention focused, for 350 pages, on a country and culture often forgotten in the farrago of eastern Europe. Belarus nestles among better-known neighbors Russia, Ukraine, and Poland, all of whose languages and influence cross into its territory. “On my right,” Ala, the narrator, tells us, “I can hear people shouting in Polish. . . . To my left people are speaking Russian.” All the while, Ala writes in Belarusian. Whatever its faults, Down Among the Fishes successfully evokes the liminality of its setting.

Babina’s characters are all caught in the middle of this Babel, where speaking a particular language becomes a matter of etiquette and ethics as much as ethnicity. The local strongman speaks Russian to his connections in the capital but addresses villagers in Belarusian when he wants to buy their land, and Ala navigates her increasingly dangerous world with amazing linguistic and cultural nimbleness. Ala’s linguistic aplomb is a much more compelling talent than her fantastical physical endurance or her ability to time travel, and to the English-language reader it might seem almost superhuman.

In fact, the realism in the background of Babina’s novel is consistently more interesting than the flashy fantasy of its plot. Ala’s very realistic personal history gives her character an unusual perspective and a distinctive narrative voice. She has struggled with heroin addiction in the past, and alcoholism dogs her throughout the novel. These problems have plagued the former Soviet Union’s poorer areas for decades, but they rarely get exposure in popular culture, and almost never from a female point of view.

Ala, along with the struggles of her past and the precariousness of her country’s present, centers the novel on an authentic and unique experience, foreign but relatable. Even as the novel piles on plot twists, each more improbable than the last, this authentic core anchors the narrative and compensates in cultural perspective for what Down Among the Fishes lacks in literary value.