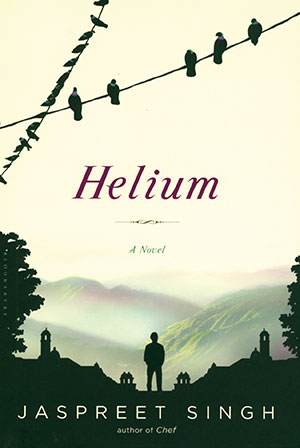 “In the land where Orwell was born, 1984 was never imaginary. In India it was real.” That year, Indira Gandhi was assassinated and anti-Sikh riots escalated, resulting in the death of thousands of Sikhs. In this fictional work, Jaspreet Singh captures the traumatic events that followed the prime minister’s assassination within the narrative of Raj, a professor of rheology at Cornell University. The fragmented narrative is constructed like memory, shifting back and forth between past and present as Raj attempts to reconcile his place during one of India’s most turbulent times.

After nearly twenty-five years of living in the United States, Raj decides to take a sabbatical, to escape his collapsing marriage, and returns to India. His escape from one traumatic event leads him into the resurfacing of another as he reflects on 1984, the year his professor was murdered during the anti-Sikh riots. Raj witnessed his mentor and professor’s death, standing on the train platform while the rioters placed a tire around his professor and lit him on fire. That day continues to press on Raj’s mind, resurfacing repeatedly as he travels through New Delhi to search for his late professor’s wife, Nelly, in hopes that she will tell him what happened to her on that day.

Memory operates on several levels, opening up the trauma that had long been suppressed within each of the characters. Raj and Nelly both find themselves working to piece together what happened after the riots in a country that has slowly been attempting to bury the past. The past itself extends as far back as the British Empire, housed in Viceregal Lodge, an empty vessel of English imperial strength, now a library where Nelly works as an archivist. There, she has compiled and researched the devastating riots of 1984 as a way to bring voices to those who have been silenced. Raj finds himself caught up in her work, as his scientific exploration of memory in the field of rheology crosses over into the discovery of memory within the minds of people.