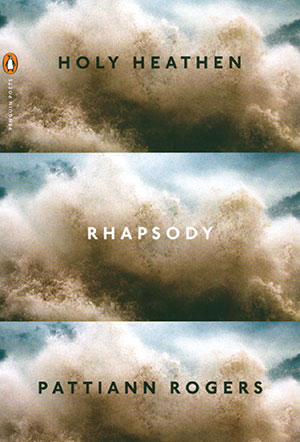 Pattiann Rogers’s poems in Holy Heathen Rhapsody inspire a feeling of transcendence in using language to create a riotous sense of abandon and a joyous pleasure upon experiencing blooming, burgeoning nature at all sides.

The art of a poet who uses nature and natural processes to express a condition of beingness and to explore states of mind is often measured in the precision and concreteness of the objects and events used as a foundation for the poetics. By that measure, Pattiann Rogers succeeds and also puzzles, for her poetry contains descriptions that are both concrete and elusive, and it is punctuated by stirring dissonances of scientific and sacred discourses, as in “The Doxology of Shadows” as well as others.

The poems in Holy Heathen Rhapsody contain a precision of description that at times echoes the form of an Anglo-Saxon catalog poem while also invoking the blending of the natural and the spiritual in Romantic aesthetics. However, the literary antecedents are overshadowed by the way she brings together religious forms and a natural spirituality, blending the sacred with the secular in restless, surging energies evocative of Stravinsky’s Rite of Spring.

Her ways of describing the blossoming meadows and the damp, rich-scented forest include the use of the language of geographical information systems and of geometry. In “Hail, Spirit,” the processes result in self-consciousness: the poem describes a spider weaving her web and her daily work, which centers on “the reading of her soul.”

Beingness is a celebration of sensuality and sensation, effected in the motion of swirling in the poems and the release of emotions with the relinquishing of the reins of rational control. In “Young Melchior Takes the Evening Air (Spatial Positioning),” weeds, wild rye, and the memory of swimming fish come together to create an overwhelming sense of motion. Melchior is “three degrees northwest of madness,” and in such a state, he is in a condition of becoming and coming into being and beingness.

“The Earth Without a Spiritual Dimension” also contains a deeply textured poetic description constructed of prairie grasses, woodland twigs, and the mosses and flowers. Beingness and the process of becoming have paused for a moment as the mind becomes aware of a kaleidoscopic array of states of mind. Here, Rogers embraces the power to invoke and evoke reawakened perception “as if I were a wild and divine thing myself.”

Rogers’s poems propose a mechanism to rediscover an essential, compassionate regard of self and nature. For example, in “Vulnerable and Susceptible,” how one encounters animals in the wild and then learns something about oneself is a fundamental metaphor to hold fast in order to overcome the “blindness caused / by the absence of light.” Such a process is regenerative, and the experience of reading the poems in Holy Heathen Rhapsody creates an emotional and intellectual impact of rare depth.