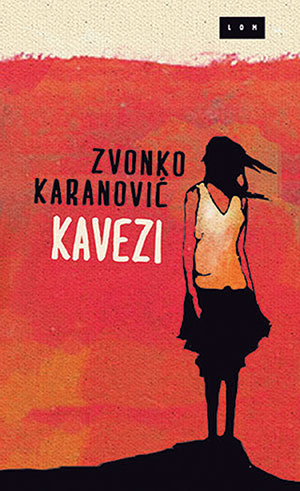 Zvonko Karanović says that his eighth book, Kavezi (Cages), a surreal prose poetry collection that has just won the prestigious Biljana Jovanović award, was conceptualized as a loose novel in which the overall picture of the book becomes clear in the end. Reminiscent of his first prose poem collection, Mesečari na Izletu (Sleepwalkers on a picnic), which consisted of forty-five poems, Kavezi has forty-three. It is “a psychedelic love story, a nightmarish, perverted tale.”

According to Karanović, “[He] found [his] inspiration in surrealism, [like the] films by Buñuel and Lynch. [He also] wanted to experiment with form.” In Mesečari na Izletu, a man is talking to his dead mother, who is giving him advice about writing and art in a room filled with strippers in high heels who try to strangle him with the phone cord while he gets an erection and helps them strangle him. Dreams and eroticism are combined with death. Several poems are in female voices (unusual for Serbian men). Karanović gives social commentary, a personal philosophy of the poet’s life written from the perspectives of dark, sarcastic, or spiritual personas.

In Kavezi’s prologue and epilogue appear two lovers with very strange names, Žicoliki and Pticolika, representing a sort of parody of the gothic novel. They wish to escape reality and fly away for a holiday but are in a cage prepared just for them. But there’s no escape from madness. The main characters are a journalist/poet, Žak, and his female critic. The poet-optimist’s wife doesn’t allow him to write poetry, constantly provoking him to kill her as she is unable to commit suicide herself.

The book is impossible to decipher in just one reading. Some scenes are horrific, reminiscent of Poe’s work, as in “The Stranger,” in which a woman is followed into a building and attacked in the hallway darkness. “Disco-Hit” is about a summer vacation and how a few guys at the beach destroy a couple’s vacation by playing loud, annoying music. In “Iskliznuća,” Karanović invents a retired superhero convention, alluding to Billy Pilgrim, a split personality, a doubly schizophrenic character, the main character in Vonnegut’s novel Slaughterhouse-Five, suggesting that the main character of Kavezi also has a divided psyche.

Karanović uses fresh, contemporary language and allusions and quotes poetry, popular music, and film (David Lynch, Kurt Vonnegut, Augusten Burroughs, Luis Buñuel, Wim Wenders, and Captain Beefheart). He uses an all-knowing point of view in some poems, so that he enters the minds of several characters both male and female. He has incredible images of new gods and speaks of critics as monkeys, reminding us of Swift’s Gulliver’s Travels.

Both books, Mesečari na Izletu and Kavezi, achieve something rarely seen in poetry, especially in Serbian poetry—we want to go back and reread them to revisit Zvonko Karanović’s many personas. Surreal or not, reality or a dream—we are taken to another world by a master craftsman.