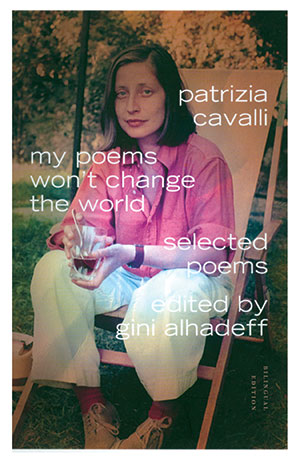 My Poems Won’t Change the World opens with poetry almost haiku-like in its concision and simplicity, proving Patrizia Cavalli a master of minimalism. And yet the very white space on her pages can function ironically: in the eponymous poem, a bemused and knowing silence follows the poet’s affirmation: “yes of course / my poems / won’t change the world.” The arch “of course” casts a shadow over the silence that follows, casting doubt on this overly deprecatory—or ironically self-aggrandizing—statement. Her readers are left to play out possibilities.

There is another well-known poet who enjoys such play with tone and self-assessment: Wisława Szymborska, the Polish Nobelist, would have understood Cavalli’s poetic personality. Both speak with voices that are modest and pretend to a simplicity that is as illusory as it is disarming: to call a poem simple is to imply easy comprehension and quick gratification. For both poets, this would be incorrect. Both are attracted to the idea that a poem can function as a puzzle, not to create bewilderment but to amuse and bemuse. An element of playfulness informs their work, helping to create the sense of a poetic persona. In Cavalli’s case, this persona can appear emotional yet never maudlin, romantic yet not conventional, perceptive but not hard-edged. Her speaker, like Szymborska’s, appears gentle. She does not seek to shock or awe. Perhaps this helps to account for Cavalli’s popularity: the twentieth century has produced plenty of shock artists, and it is good to be reminded that wit does not always vaunt itself, and that the element of surprise is distinct from that of shock.

Cavalli lives in her body and writes frequently about the complexity of love, often figuratively, though we are never sure. “Don’t count on my imagination,” she writes. The corporeal reality of the present moment takes precedence over acts of memory or hypothetical projections, and the language of everyday life pushes away preciosity and poeticism.

This facing-page translation is a gift for English-language readers who are curious about the poems’ original sound effects. Readers have noted that her work lends itself well to translation, and these translations—completed by many illustrious hands—give immense pleasure, yet it is also rewarding to note the occasional rhymes or deft enjambment of the original Italian. This is a book to linger with that will delight readers in both languages.