The Ogallala Road: A Memoir of Love and Reckoning by Julene Bair 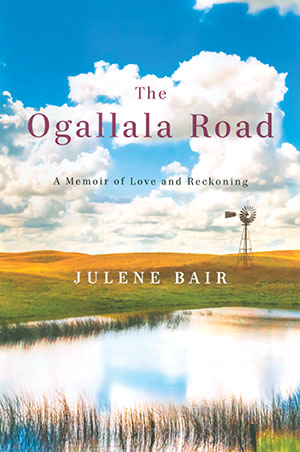 In this memoir, Julene Bair attempts to weave multiple kinds of love and reckonings together as she informs readers of the rapid depletion of the Ogallala aquifer, a life-giving but vulnerable source of water for the central high plains. Bair’s perspective is a critically important one, for she writes from the perspective of a farming family that for many years earned its living from crops irrigated by wells draining the aquifer.

Like Janisse Ray and William Kittredge, Bair sets herself the difficult task of braiding together an evocation of family, a beloved home place, and environmental devastation, adding a love story that only sometimes connects the other strands. Ward, a Kansas rancher, seems to offer the author an oasis in the desert of high plains culture and romance, but ultimately he is nothing more than a mirage. In Ward, Bair sees a way back home, a fulfilling life in the place she lit out from as soon as she could. In Julene, Ward sees a connection to a more sophisticated world, and when he contemplates moving to Laramie, Wyoming, where she works, there is the promise of legitimacy as a cowboy and those mythic Wyoming license plates. When it comes down to it, neither can make the requisite compromises for the fantasies the other has created.

Myths, especially myths of manhood, working landscapes, and the West haunt each generation of this western Kansas family, and Bair’s memoir is both most fresh and most powerful when she fully engages these myths. Her father’s edict—“Hang on to your land!”—haunts the surviving generations. Under the spell of the patriarchal myths expressed through hard work, thrift, and commodity agricultural production, each generation struggles with legacies. For Bair’s brother, his father’s drudge as a teen, manager after his father’s death, the farm kept him from pursuits he loved. For Bair’s son and nephew, farming means fulfilling the family legacy, “what Grandpa would have wanted.” Bair’s niece sees the family allegiance to the farm in a broader context. For farmers like Harold Bair, the patriarch still calling the shots long after his death, it’s a “power trip,” something out of King Lear.

Within this larger context, Bair agrees to sell the farm. This necessary and painful step does not release the family from the environmental responsibilities of their land tenure. It complicates them. One of the signal achievements of Bair’s eco-memoir is that she can both stridently defend her anti-irrigation and pro-environment stance and recognize her complicity in the economic and cultural systems that keep industrial agriculture ascendant in the United States. In The Ogallala Road, Bair wonderfully shows how even the most forceful defenders of the natural world can be ensnared by patriarchy’s most intimate expression—in lovers, in fathers, sons, and in ownership of land.