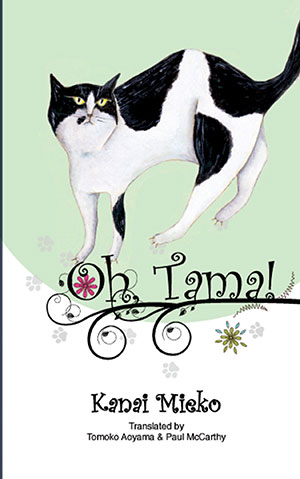 Oh, Tama! is a study of parallel lives. At its center is the character Natsuyuki, an erstwhile photographer. He lives alone, attempting to make ends meet financially, but he is surrounded by a group of dysfunctional people who take advantage of his inherent good nature. Or is it his submissiveness and passivity in the face of solitude? These friends think nothing of arriving on his doorstep, moving into his small apartment, eating his food, sleeping in his reduced space, and seemingly giving nothing back in return. Although at first it seems that Tsuneko (a pregnant female who has had relations with two of the group) is the element connecting Alexandre (Tsuneko’s brother), Fuyuhiko (a psychiatrist), and our host, Natsuyuki, it soon becomes clear that it is not her but rather the solitude of each of the three men that connects them to each other, as well as the care they all lavish upon Tama the cat.

The pregnant Tsuneko has disappeared, so Alexandre brings her pregnant, stray cat, Tama, to Natsuyuki’s to be cared for in her absence. The obvious parallel between the pregnant Tsuneko and the pregnant Tama is clear. Also clear is the parallel between the loving care Natsuyuki gives the cat and her kittens versus the lack of similar care doled out to him by his neglectful mother. She is not only unfeelingly nonmaternal toward Natsuyuki (the offspring of her second husband); she had earlier abandoned a son born to her in a first marriage. This abandoned offspring turns out to be Fuyuhiko (the psychiatrist searching for Tsuneko). What a coincidence! How ironic that pregnant Tama is abandoned by pregnant Tsuneko, who abandons Fuyuhiko the same way his mother had abandoned him, and what a coincidence that both end up in Natsuyuki’s apartment. Although both are needy, abandoned creatures—man and pregnant cat—Natsuyuki accepts the responsibility of caring for them. When Natsuyuki’s mother learns that her firstborn son is sojourning in her second son’s apartment, she comes to meet him and suggests that Natsuyuki share the inheritance he is to receive (his father having just died) with his half-brother.

Yes, it is a little confusing. But the plot turns on the reader’s varied emotions—sometimes furious with Alexandre and Fuyuhiko for taking advantage of Natsuyuki, then suddenly furious with Natsuyuki for not sticking up for himself and throwing the interlopers out of his apartment. At times one feels sorry for the desperate Fuyuhiko, who searches for his pregnant lover, yet at other times one feels anger toward him for not being able to put her behind him. Tsuneko, who (they hear from a female friend) has gone to reside in Cairo, has no intention of returning, and has quite cavalierly shaken off the dust of her series of ex-lovers. The only apparent consistent emotion felt by all (other than Natsuyuki’s mother—who feels nothing for anyone except herself) is the enveloping care they manifest for Tama and her litter of kittens.

Is this a strange tale? Not so much strange as convoluted. Yet it is an enticing novel and one that allows the reader to envelop herself in the strange sights, sounds, and tastes of this group of Japanese characters.