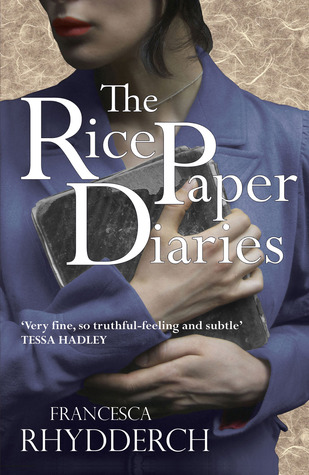 Inspired by the author’s family history, The Rice Paper Diaries recounts the experiences of Elsa, a Welsh woman in 1930s Hong Kong at the outbreak of World War II in 1939. It follows her through the early years of her marriage to a Welsh officer, Tom, their fraught relationship unraveling against the background of war and internment. Following the invasion of the Japanese army, the young family is transported to Stanley, a camp for civilians on an island off the coast of Hong Kong. Francesca Rhydderch’s description of internment—the daily deprivations, the power games between the inmates, the hunger, and, worst of all, the boredom—is detailed and sympathetic without being sentimental. Tom in particular suffers from being told what to do, and he is eventually separated from his wife and child. Years later, they are reunited. But their reunion is far from the happy event that one imagines.

The novel, the author’s first although she has published short fiction before, is well researched and carefully put together, yet the beginning is hesitant, perhaps even too careful in its plotting. One has the feeling that the novelist is anxious about the distant setting, anxious about setting it up so that the reader won’t be lost. It is in the second half, when Elsa, Tom, and their little daughter, Mari, finally return to Wales, that the novel really comes into its own. Rhydderch is far more confident here in the landscape of Cardiganshire, and the narrative moves freely and easily among the characters. The complex relationships between husband and wife, and between Elsa’s sister and her German husband, are skillfully portrayed, and Elsa and Tom’s attempt at recovering their marriage cleverly reflects their individual recovery from their experiences of internment.

Mari, as a baby and then as a young girl, acts as a conduit to this postwar world, seeing her homeland for the first time and yet nostalgically comparing it to her birthplace, Hong Kong. Her relationship to Lin, her Chinese nanny, provides a sense of continuity in the novel: Hong Kong will always exist in the lives of the characters, never forgotten. Particularly strong is the representation of motherhood: the tactile portrayals of Elsa holding Mari, the touch of skin, and the motherlike bond between Lin and Mari, too, are poignantly conveyed. Again, Rhydderch has a talent for representing emotion without falling into cliché. After being separated during the invasion, Lin brings Mari to the temporary camp where Elsa and Tom are being kept. She holds the baby for Elsa to see through the barbed wire. Elsa simply looks at her baby calmly; she does not cry or scream or try to run to her—the power of the moment is captured in its simplicity.

The Rice Paper Diaries is an accomplished first novel filled with calm and wise observations, successfully depicting a largely neglected area of history through the fraught and compelling relationships of a young Welsh family.