Sailing through Cassiopeia by Dan Gerber 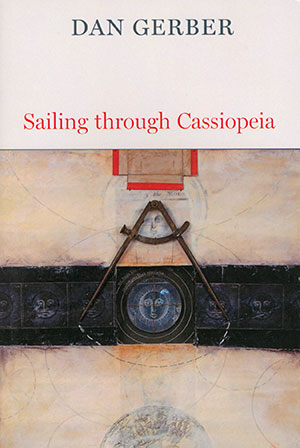 Dan Gerber’s eighth book of poetry is concerned mainly with relationships, memories, and a desire for continuance—important, but common enough themes. Where Gerber really starts to differentiate is in his approach: he frequently focuses with sustained intensity on something fairly ordinary or easily observed until it leads him to the unseen or not so easily discerned. He is really a metaphysical poet in physical garb. For example, in one poem a speck of lint on a sleeve, which is brushed away as insignificant or unwanted, turns out to be a tiny moth; this, in turn, illustrates the importance of Gerber’s close looking—what Krishnamurti called “the flame of attention”—without which we might otherwise miss a great deal of the beauty, the fine beauty, of our lives.

Gerber’s diction can be quirky, even a little obtuse: words like “alembic” and “eremite” and “iridaceous” seem dropped into poems that otherwise have the vocabulary level of high-school English. Yet even this feature is part of Gerber’s idiosyncratic style, which is somehow immediately sensory and metacognitive at the same time. For example, in remembering when his father died, the speaker in one poem switches from past tense to present and then notices that he has done so, musing, “Does it mean we’re always in the present wherever we may be thinking?” This, then, further illustrates that the past is never past if we summon it fully enough with the imagination—a mini-Proustian conclusion.

At their best, Gerber’s poems disarm with their unpretentious style and vivid images or tropes. For example, in one poem we read “the fire flaps like heavy canvas in the wind.” In another poem, we read “the clatter of the mower whirling / through a still spring morning—the bleating of the stems / that cling to the blade.” Yet too often the poetry seems like chopped-up prose with a fairly flat sonic quality. For example, consider the following five lines: “She pants and thumps her indefatigable / tail against my leg // when we pause on our gentle walk / over the hills and still / defers to her nose above all other callings.” This is a fairly prose-like, straightforward description of action that spans five lines—quite a few lines in a short lyric. We have no real defined rhythm, no sonic weaving of assonance or consonance, no figurative language. One can only wonder what Billy Collins or Tony Hoagland might have done with this baseline image. Of course, Gerber is not Collins or any other poet; he has his own distinct style, but this reader wishes there were more vivid passages like the ones quoted above describing fire and a mower.

Gerber at his best sets the bar for his other poems, and the collection is uneven in this regard. Still, Gerber’s poems are authentic, and there are plenty of passages and poems in this book to reward reading.