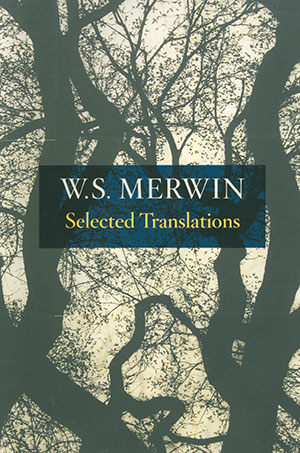 This collection of W. S. Merwin’s translations is a deeply worthy book, beautifully produced, and meant to last as a physical object and cultural offering. The book is divided into three sections—translations done from 1948–1968, 1968–1978, and 1978–2011—and as such reveals something of the ongoing development of the translator himself, though not as much as might be expected; it seems that Merwin was masterful from the onset, at least in the finished projects he offered. This is remarkable, especially considering the range of languages covered in the book. An exhaustive list would be too long for this review, but a short listing will serve to illustrate. Besides the Spanish that Merwin seems to favor most, he includes poems that were originally written in French, German, Russian, Chinese, Vietnamese, Occitan, Pampa (Pampas Indian), Egyptian, Welsh, Persian, Crow, Sanskrit, Japanese, Urdu, and multiple others. There is no discernible systematic coverage or structure to these projects other than the ranging interests of Merwin, which is part of the delight of reading this book; that is, the reading is unpredictable, and discoveries await the reader at almost every turn of the page.

Then there’s the pleasure of the physical book itself, enough to woo back many digital fans or at least give us all pause in our headlong rush to the electronic. Copper Canyon, a press rapidly becoming one of the best poetry publishers in the world, seems to have spared nothing in producing this book. The hardcover version comes with the embossed signature of Merwin on the cover, over four hundred pages of archival-quality paper, generous page size and font size, a beautiful and uncommon typeface called Janson Text, and (in spite of the book’s length) a comfortable and lightweight feel to the hands. Gratitude is extended to Copper Canyon for not sacrificing the art of producing books to commercial shortcuts or exorbitant prices. This book retails for $40 and should be purchased by every library in the country.

Finally, although it is impossible to know for certain without reading each poem in the original (in which case translations would be unnecessary), it seems that Merwin has avoided the trap into which many a translator has fallen—the intended or unintended appropriation of the original poem to a version of one’s own writing. There does not seem to be even a faint Merwin style shadowing these translations. Instead, he seems to have stayed as faithful to the original voice and style of the poems as can be possible, exercising restraint and a finely tuned ear in finding English-language expressions. As a final added treat, the reading of Merwin’s brief foreword offers some of the best commentary this reviewer has ever read on the advantages and dangers that learning poses to original poetic expression. What a fabulous book of poetry.