What Poets Are Like: Up and Down with the Writing Life by Gary Soto 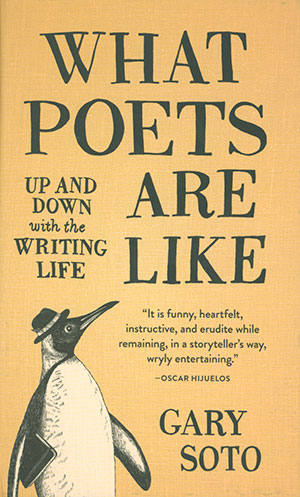 With effortlessly honest introspections, acclaimed poet Gary Soto describes the wide-ranging experiences of the writing life in all its extremes. Soto bares his memories—the awards and the rejections, the recognition and the indifference—with grace, like a well-seasoned writer should. Yet he also admits these ups and downs with a sincerity that is increasingly difficult to find in a culture in which people are only interested in sharing their successes. Written in brief episodes, Soto’s reflections invigorate the senses as he confesses to being a flawed human just like the rest of us. And he is satirically funny, even if the fun being had is at his own expense.

Soto claims his point of view as that of an aging poet wondering if his best poems are behind him like a well running dry. Soto talks about his worries to remain valued throughout the book, such as in “Oakland Zoo,” wherein Soto counterbalances losing a publisher by appreciating his surroundings: a chimpanzee offers the sullen poet a smile and a glob of fresh snot, and as Soto refuses the kind gesture, he wonders, “Were his feelings hurt? Or was he just teasing me?” While many of these episodes encapsulate bleak moments of every writer’s “writing life,” it is important to see all the beauty, humor, and even peace within this unpredictability, especially as a writer.

Soto never purposefully makes the reader feel too uncomfortable. Rather, there is a sense of being one of Soto’s longtime drinking buddies as he speaks to the reader without mediation, allowing himself to yammer on at times about how hard life is as a poet. Interesting tangents outside of Soto’s life occur in episodes such as “Keeping Alive,” when Soto meditates on such hard times as he describes how Gabriel García Márquez ate out of trash cans to survive. In “A Woman Stops Her Car,” Soto tells how he ran away at age seventeen and slept in cars, stole biscuits from churches, and eventually worked at a tire factory. Soto shares these raw personal stories with the reader because he wants to show how a writer is a survivor, too.

However, what could be just a cathartic account of traumatic scenes from the inner thoughts of a writer becomes something much more meaningful. Through these episodes, Soto describes that a poet’s most redeemable quality is his eagerness to be loved: “like dogs, if you call them they will point to their chest and say, ‘You mean me?’” Soto’s greatest achievement in these episodes is writing not humanely, but “humanly”—he writes the writer’s real life.

Moreover, a writer’s constant yearning for praise and recognition is not inevitably seen as a bad thing, but it is inevitable. While Soto may criticize writers for being too invested in winning awards and fame, he wants his readers to understand that it’s human nature. For Soto himself, he unabashedly admits, “Dogs frequently appear in my poems. I respond to love. If you call me, I will get up from my chair, a little slower now that I’m a senior, and come to you.” Growing old might make some writers feel ashamed, but at least we can agree with Gary Soto that, for better or for worse, this is “What Poets Are Like.”