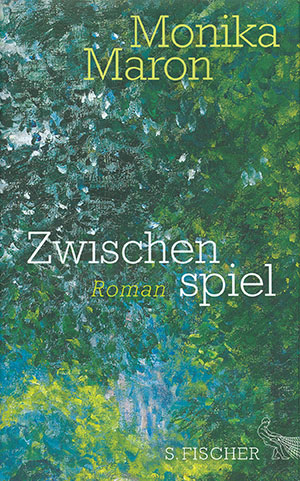 In a new novel laced with autobiographical allusions, Monica Maron combines two highly distinct subjects into a successful work of thoughtful and enjoyable fiction. This is the story of a day in the later life of Ruth, a museum preservationist, whose increasing sense of mortality opens her up to encounters with her conscience about religion in general and, more specifically and more forcefully, about painful choices she made earlier in life. Zwischenspiel is also a précis of the life of a family in the German Democratic Republic in the 1970s and 1980s.

On her way to the funeral of her ex-mother-in-law, Ruth falls under an odd spell and gets lost. She ends up at a large park adjacent to the cemetery and spends all day there, chatting with the ghosts of Olga, the recently deceased mother of her first partner, whose funeral she had just missed, and Bruno, a friend of her second husband. There are a couple of other “shades,” or phantoms, whom she talks to—including an unforgettable, magisterial appearance by Erich and Margot Honecker—and the result is a set of fairly fresh, imaginative, and unsentimental reflections on dying, on guilt, and on pity and regret. Even the stray dog, a feature in (too) many of Maron’s works, fits comfortably into the scene.

The dog actually forms an important link between this world, which Ruth is apparently getting ready to leave or at least begin experiencing from some abstracted, purgatory-like state, and the next. The cemetery is sending its denizens into the park as visitors, and the space of that park provides the setting for the cosmic interlude of the title that allows people of this world to benefit from the wisdom of people from the other world.

Early on the protagonist asks herself how many different people she had been, or different personalities she had had, in her life. When wondering at, in essence, “wie viele Ichs” (how many I’s) she had felt in her mind and heart, she considers the tremendous quotient of change she has both caused and had to process in her life. When life is a moving target in this way, the reader might reason, the only way to see it for what it really is, to get our feet onto a stable spot of ground, is to let ourselves go in interludes of what Maron calls “dreams,” which encompass sun-blinded reveries, imaginary conversations, and, in the old days, hashish highs. It is in these altered states that we can touch something permanent and objective, or at least some space for more disinterested ethical considerations, beyond our emotion- and event-filled daily lives.

As a reflection on dying and death, the book relies on a short, simple plot and the willingness of the narrator to take a hard look at herself. Maron’s creativity and crisp diction elevate these reflections far above the commonplace and shepherd the plot into an enjoyable rhythm. An openness to looking into the other world, including to the more sinister realizations that accompany it—epitomized by a tableau vivant of a scene from a Goya painting to which Ruth is drawn at dusk in the park—invites Ruth and, arguably, the reader to dilute our fear of death with the realization that ethical solidarity is possible with the centuries’ worth of seekers who have also tried to make sense of passing.