Rock, Paper, Scissors and Other Stories by Maxim Osipov 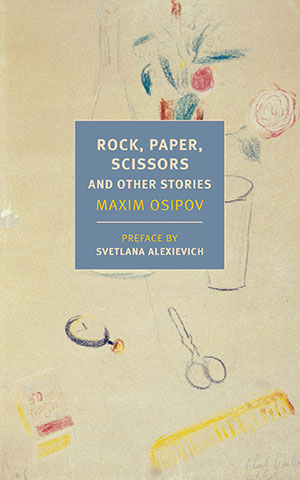 The twelve scintillating short stories in Rock, Paper, Scissors and Other Stories, the first English collection by cardiologist Maxim Osipov, are brilliant. Not one disappoints.

Osipov’s style and subjects are reminiscent of Anton Chekhov and Ivan Turgenev. In “Polish Friend” and “Objects in Mirror,” the Russian physician provides the dogma for his fictions. A story should “demand expansion [and] movement.” Every story, “no matter how simple, requires a climax and a denouement.” Though basic principles, in Osipov’s skillful hands they expand to delineate the boundless territories of characters’ lives.

The opening brief but propulsive “The Cry of Domestic Fowl: In Lieu of a Foreword” establishes the tone and themes for all that follow. A doctor (many of the stories feature a medical professional) in a rural area of Russia reflects on his memories of odd birds, patients who populated his hospital and pecked away at the “thing of wonder” that is his home country. Even though “swallows and tits often fly [into] your house . . . you can’t live with your windows closed.” Whether you’re in “Moscow, St. Petersburg or the provinces,” the “world doesn’t break.” The only choice is to “move, if you’re afraid.”

The characters are life travelers seeking happiness through open windows. In “Moscow–Petrozavodsk,” on a fourteen-and-a-half-hour train ride to an international conference, a doctor wants time to read alone. Instead, he is disturbed by two intruders, who may be murderers, who left windows closed and spent the night with their victims.

The title story, “Rock, Paper, Scissors,” is one of the longest. It examines aspects of joy from the point of view of a professor of Russian language and literature, occasioning references to Dostoevsky and Tolstoy; Lermontov and Pushkin; Ibsen and Blok. The narrative is split between the professor’s observations and those of the proprietor of a pelmennaya, a dumpling restaurant. They live in a small, peaceful town in central Russia where “everyone knows everyone else’s business, especially when it’s bad.” And it’s often bad. The teacher feels he’s “sitting backwards, on a train, looking out the window.” He believes provincial life “has its share of arrogance, foolishness, and frivolity, in open and grotesque forms.” In one of these forms a resident is accused of attempted rape. Ultimately, the story unites politics and religion, literature and philosophy with themes of love, guilt, and retribution.

The longest story, “After Eternity: The Notes of a Literary Director,” most closely adheres to the dictum of “expansion and movement.” It occurs in another small town, Eternity, features another doctor and his patient, the dramaturge of the title. When the patient leaves behind a notebook, the doctor breaks confidentiality, publishing the notes with the justification that it would give the patient “a chance at fame.”

That fame is dependent upon the critic creating a company that performs classics. Echoes of Chekhov appear when a gun goes off onstage. Another direct reference to Chekhov (“Mother asks you not to chop down the cherry orchard until she’s gone”) occurs when Eternity heads toward liquidation with just “a glimpse of the slice of the world” outside the patient’s window.

In the remaining stories, doctors, teachers, screenwriters, musicians, and priests search for happiness through transformative travels and fresh perspectives. In the haunting “The Waves of the Sea,” a priest, once a “dependable, soft-spoken, laidback geologist,” acquires a dog after an elder at a monastery cautions him and his wife against having a child.

When a Russian story starts with “The priest had a dog,” it invites inevitable Chekhovian comparisons. The couple name their dog Mona because they “couldn’t just call her Kashtanka, like the red dog in Chekhov’s story.” Mona overtakes their lives and causes a marital rift. The priest fears dying after he remembers the story of a ninety-nine-year-old neighbor who froze to death after family members left windows open. Then he realizes it is “good to be alive,” hums the hymn of the title, and the story ends where it began, “The priest had a dog.” Everything comes full circle.

Rock, Paper, Scissors and Other Stories encourages hope of survival in a sometimes hopeless world. It opens windows to unknown, unseen, unheralded lives.