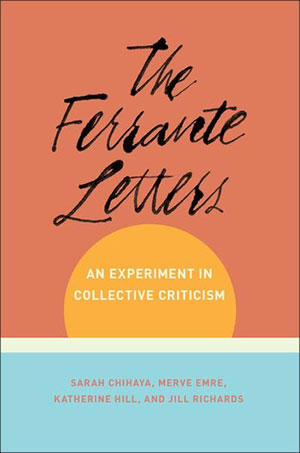 HOW APPROPRIATE THAT ONE of the most incisive studies of Elena Ferrante to date has been the outcome of an experiment in criticism. As readers all around the world know, Ferrante herself is somewhat of an experiment in authorship; for nearly thirty years, she has published under a pseudonym, and the stratospheric levels of fame brought on by her Neapolitan novels has only cemented her well-documented need for privacy. This determination to eschew the role of author personality has been met with suspicion by those who claim it to be a marketing ploy yet with acclaim by those who see it as a form to destabilize the orthodox ways in which we tend to think of writing and its production.

I’d venture to say that the authors of The Ferrante Letters belong to the second group. Their collaboration began in the summer of 2015 through a series of blog posts about the Neapolitan novels. These posts were not originally conceived with a book in mind but rather as an effort to cultivate “a distinct model of criticism: one deliberately oriented to the ongoing labor of thought.” In time, their exchanges evolved into a form of collective criticism, “a model of authorship that departs from dominant forms of academic production.” The result is a success, not only for what it contributes to discussions of academic writing and its limitations, but also because it fits so snugly with its object of study.

The book is divided into two parts. The first consists of the posts, written as letters, which document the authors’ initial reaction to the novels in a refreshingly colloquial style—“Lila (such a Leo)”—and touch on a wide variety of subjects, from female anger to Ferrante’s clever manipulation of genres. Part 2 presents an extended essay from each author. The scope of these pieces is more ambitious and focused than that of the posts, yet they retain the intimate register of their epistolary predecessors, and they never give way to the academic rigidity that one could only guess would disconcert Ferrante, an author so comfortable in ambiguity.

Chihaya’s piece on the “Unform” pre-sents the most engaging discussion of the Neapolitan novels’ formal innovation that I have read to date. Hill, a novelist herself, deftly touches on Ferrante’s orchestration of an authorial persona, claiming that “far from promoting a new breed of nonfiction, Ferrante reminds us, again, what fiction is.” Richards then turns to fan fiction, as well as other paratexts, to image a queer alternative reading of the novel. Lastly, Emre’s essay uses her (somewhat awkward) correspondence with Ferrante to muse on strategies of authorship, asserting that Ferrante’s absence, far from being irrelevant to her work, has in fact “resurrected a powerful, almost transcendent, myth of the author as removed from the realities of time and space.”

All along, a studied informality underlies these pages, carefully crafted and unafraid to draw as much from personal experience as from the pantheon of literary criticism. In a way, readers interested in probing the sociocultural context of the Neapolitan novels might want to look elsewhere. The Ferrante Letters does not abide by traditional standards of scholarship; it is not weighed down by hefty footnotes, and it does not advance a unified claim. But neither is it interested in doing any of these things. Its energies lie elsewhere, in the development of a critical feminist praxis intent on rethinking models of textual engagement—in this, it is much closer to its object of study than a traditional academic monograph would be. What Chihaya, Emre, Hill, and Richards have created might cater more to the cultivated reader of Ferrante than the scholar, yet academics stand to learn much from as daring and novel a form of criticism as this one.