Ascent to Glory: How One Hundred Years of Solitude Was Written and Became a Global Classic by Álvaro Santana-Acuña 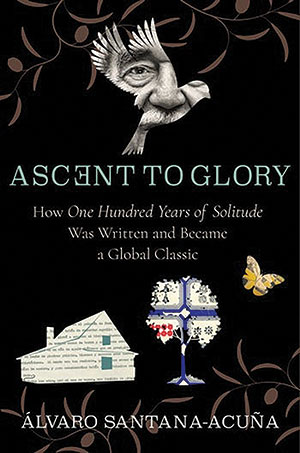 BEHIND EVERY GREAT novel there seems to be a great creation story: William Faulkner wrote As I Lay Dying in eight weeks while working nights at a power plant; Zora Neale Hurston wrote Their Eyes Were Watching God in seven weeks in Haiti; and Gabriel García Márquez, seized by the plot for his masterpiece while driving his family to a vacation in Acapulco, turned the car around, drove home, and wrote nonstop for eighteen months. It’s odd that these creation stories share the tones of the novels, but no odder than our need to believe them.

Álvaro Santana-Acuña takes the García Márquez myth as his starting point and proceeds over three hundred pages, not to debunk it, but to unravel its threads and reweave them into a much broader panorama of Latin American and Spanish literature between 1950 and 1990. He mostly eschews the García Márquez personal narrative, delivering a more omniscient, almost aerial view of the Latin American literary landscape. Thus, this study is nothing like the standard biography by Gerald Martin (Gabriel García Márquez: A Life) or the close-ups of Ilan Stavans (Gabriel García Márquez: The Early Years) and Plinio Apuleyo Mendoza (Aquellos Tiempos con Gabo). Nor is there much “case history” of the sort written by Gene H. Bell-Villada or Alejandro Herrero-Olaizola, though this book clearly profits from the latter’s work.

The critical approach is at first unclear. There are few references to specific schools, and only a few to Bourdieu, although the concepts of habitus, disposition, and cultural capital are clearly important. But it soon becomes clear that the frame is anthropological and sociological. Braudel, Chartier, and the annalists seem to lurk in the background, as the multidirectionality of markets, especially for genres, surfaces regularly, though previous scholars are rarely mentioned.

This is an overdue study of García Márquez in his cohort, writers such as José Donoso, Carlos Fuentes, Alejo Carpentier, and Mario Vargas Llosa. It’s also a roadmap to the important journals of the period, which Santana-Acuña has done a fabulous job of researching. We see the famous Colombian writer among contemporaries such as Adriano González León, Álvaro Cepeda Samudio, and Elena Garro, all working toward a “New Latin American Novel,” a concept the author works hard to establish. The byword and the concept in the middle of this study is the “networked creativity” of Latin American writers, to which end the critic Luis Harss is instructively quoted: “All of these people lived more in the language than in the country.” Whether or not literary history will buy the concept that three generations “collaborated” in the short form (think Borges), hybridity (think Cortázar), and the New Novel (think Fuentes, Vargas Llosa, and García Márquez) remains to be seen.

Within this big picture are many juicy bits. Santana-Acuña discounts the value of passage through Cuba and New York City (Pascale Casanova’s Paris is not even mentioned) and focuses readers on Barranquilla and Mexico City. In the former, Santana-Acuña shows through close readings how García Márquez transformed his style at the sentence level by adopting a mix of devices from journalism and from Faulkner. He was so style-forward by the Mexico City period that some of his colleagues at Mundo Nuevo began to call the author “García Marketing,” since he aggressively demonstrated that “publicity was key to creating a literary brand.” This makes fascinating reading and sustains the claim that a “Latin American” literary Spanish, as well as point of view, was being created.

Two things readers should not expect to see in the study are Carmen Balcells’s agentry and the heralded translation skills of Gregory Rabassa. We have probably heard enough about the former, and the astute views of translation scholar Deborah Cohn are visible behind the scenes, influencing a levelheaded view of translatability. Placing García Márquez so carefully among the nuanced forces of Latin American literature, however, makes this an essential book for readers of Cien Años and a rewarding one for anyone interested in the globalization of world literature.