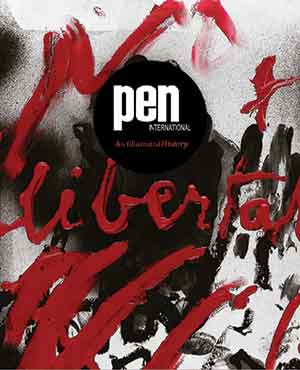 “UN MIRACLE D'AMOUR,” SAID French writer Paul Valéry in 1925 about the existence of PEN International, founded in 1921 by English novelist and poet Catharine Amy Dawson Scott with the intention of creating a club where men and women writers could meet and discuss literature and the ways in which they could connect with fellow writers around the world. Valéry’s phrase also applies to this richly illustrated publication created to celebrate PEN’s centenary. The two editors and five authors, aided by archivists, researchers, members, individual PEN centers, and others as outlined in the acknowledgments, clearly spent a lot of time finding, compiling, and selecting around five hundred photos and documents as well as composing related captions and text. The resulting story contains as much depth and complexity as PEN’s five highlighted committees/areas of action, which I’ll discuss later. It’s a lot to take in, and while certain section titles, keys, captions, and font color choices could be improved to help reading ease and navigation, this book succeeds overall at dramatically immersing the reader in the history of this organization dedicated to international literature and freedom of expression. Moreover, it does so by operating at three levels: narrative, archival record, and specific PEN cases and stories.

In brief, the narrative of PEN begins with well-meaning yet somewhat elitist English writers wanting to connect with international writers through literature “that meddles not with politics,” as the first president, John Galsworthy, wrote; a concept that seems hopelessly naïve now and should have seemed highly suspect then despite the post–World War I cosmopolitan atmosphere. Nonetheless, the primary tenet of literature as a “common currency between nations” that can be used “in favor of . . . mutual respect” caught on, and by 1930 there were PEN clubs in forty-five cities across four continents. Next, the rise of and competition between socialism, communism, and fascism in the 1930s as well as the involvement of people such as German-Jewish writer and activist Ernst Toller challenged the “above politics” ideal, and the Shoah, World War II, the Cold War, and postcolonial politics continued that trend. By the end of the story and in response to these challenges, the original three-point charter from 1927 has been revised numerous times and is now complemented by seven other key documents, all of which are featured at the end of the book. In addition, there are now 145 centers worldwide.

From an archival perspective, this book, organized into four sections—Origins, A Brief History of the PEN Charter, A World Republic of Letters (the longest section with five subsections based on key PEN committees/areas of action), and PEN Key Documents—functions as a dense record of historical photos, documents, and letters with the helpful captions and commentaries of the authors and editors on the side. It mindfully records and orders what happened over a hundred years amidst a dense network of ideas, people, places, and cultures, and one could imagine a multiplicity of spin-off research projects in print and digital forms to follow. In fact, PEN created a book-focused short video (helpful for understanding the structure of the book, something that could have been better glossed in the text) and blog, while the Henry Ransom Center at the University of Texas has a digital archive of select records from PEN International and English PEN as well as related teaching guides.

While this book functions admirably on the narrative and archival levels, it shines on the third one, specific PEN cases and stories. You can dip in anywhere and encounter riveting PEN cases, signaled by white text on a red background, and PEN’s reactions via corresponding PEN International and individual center stories. For example, in the “Writers in Exile” subsection, you encounter the story of the first center in exile comprised of German writers who fled the Nazis, and two pages later you have the PEN case of Austrian writer Stefan Zweig. Sometimes the story is without a corresponding PEN case, such as the Catalan PEN club and the moment when some thirty-two members escaped from General Franco’s advancing armies on a library bus intended to bring books to Republican soldiers on the front lines. Overall, the chronological order, variety, and powerful combination of cases, stories, illustrations, and explanations make this section stand out.

Some other notable moments from the five subsections include the cases of Haitian Jacques Roumain, German Ludwig Renn, Spaniard Federico García Lorca, and Hungarian-Jewish writer Arthur Koestler, who were the first four imprisoned writers for whom PEN campaigned for release; a haunting picture of Dương Thành Lợi, current president of the Vietnamese Abroad PEN Center, as a teenage boat person coupled with the story of PEN Vietnam in Exile; the fascinating case of Wole Soyinka of Nigeria, who was in and out of prison and exile before becoming the first African writer to win the Nobel Prize in Literature in 1986; the women writers protesting for gender equality at the 48th PEN International Congress in New York in 1986; the efforts of PEN Tibetan Writers Abroad and the Kurdish PEN to keep their languages alive and vital; the relatively neutral political space provided by Afghan PEN, founded in 2003; the increasing support of writers in Indigenous languages by PEN International starting at the 2003 Congress in Mexico City; and the beginnings of the symbolic empty chair after keynote speaker Salman Rushdie presented it at the start of a meeting in 2004.

In addition, you learn about the role of PEN Mali in promoting dialogue and keeping the peace there; the heartbreaking case of Syrian activist Razan Zaitouneh, who was abducted with her colleagues in 2013 and was never seen again; the meeting organized by Swedish PEN between Russian PEN and Ukrainian PEN in 2014 to discuss mounting aggression and threats to freedom of speech; the election of the first woman president of PEN International, Jennifer Clement, in 2015; and the case of Chinese-born Swedish citizen and publisher Gui Minhai, who was abducted while on holiday in Thailand in 2015 and is currently serving a ten-year sentence in China. And this is just a small sampling.

Overall, this book generates greater understanding of and admiration for the work of PEN International and its 145 worldwide centers, but it also raises questions. In particular, can PEN meaningfully reckon with the continual failures of a neoliberal capitalist worldview given its complicity in the tremendous and growing wealth divide in many places in the world coupled with its contribution to the environmental crisis? Can it contend with growing intolerance, nationalism, fanaticism, and the associated violence? Can it imagine a worldview after or beyond the Anthropocene, one that incorporates animal and environmental freedoms of expression?

In a letter from British-Pakistani writer Kamila Shamsie to Razan Zaitouneh after the latter’s abduction, Shamsie begins, “I have to confess I’m sometimes suspicious of optimists.” At the end of the letter, after reflecting on the lives and words of various writers and activists, including Zaitouneh’s, she writes, “You see, you’ve made me an optimist. Look how powerful you are, changing people’s minds about the world after reading just a few words by and about you.” In the end, this book and PEN International could make you an optimist too, which is, in light of the state of things, un miracle d’amour.