Dr. B. by Daniel Birnbaum 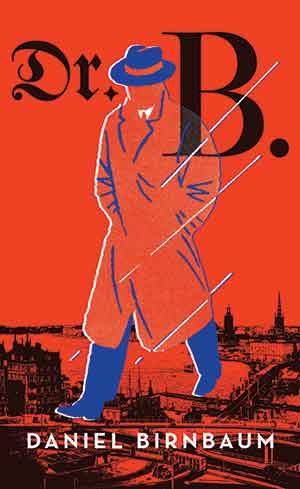 DURING WORLD WAR II, as the Nazis terrorized Europe, refugees, resistance fighters, and spies from across the continent found their way to Stockholm. In the years since, Daniel Birnbaum notes in an afterword to Dr. B., the Swedish capital of the 1930s and ’40s has sometimes been called “a Nordic Casablanca.” Yet relatively few works of fiction about the war years have been set in neutral Sweden. Unhurried and eloquent, Birnbaum’s debut is a creditable entry into this relatively small field.

A tale featuring existential dilemmas, closely held secrets, and famous literary names, this self-assured novel focuses on Immanuel Birnbaum, a German journalist who flees to Stockholm in 1939. The story is inspired by a cache of family papers the author inherited from his grandfather, a war refugee. An erstwhile German patriot who was born Jewish, the protagonist converted to Christianity as a young man. But as the son of a prominent synagogue cantor, life in Hitler’s Germany became perilous. Immanuel has managed to escape with his wife, Lucia, and teen sons Karl and Henrik, but he’s lost track of his brother, Gerhard, who’s remained in their home country, and personal friends like Walter Benjamin, the renowned writer who would commit suicide in 1940.

Writing for German-language newspapers under the byline Dr. B., Immanuel files reports “devoid of any personal tone or political slant.” His low-key competence lands him a job at a publisher working with banned and exiled novelists. His new office buzzes with informed chat about Thomas Mann, Joseph Roth, and Robert Musil. Though some of this banter feels forced, as if Birnbaum is straining to squeeze notable names into the mix, it results in some memorable scenes. In one, Dr. B.’s colleagues discuss Stefan Zweig’s reluctance to accept expert advice on a chess book he was writing—The Royal Game was published in 1943, the year after Zweig’s suicide.

Though the war is in its early stages, it’s clear to Immanuel and his colleagues that Germany, which makes weapons from imported iron ore, will struggle if resistance groups can disrupt the supply chain. Is this why a menacing stranger of uncertain loyalties has approached Immanuel, asking that he share his “knowledge of any clandestine activities afoot”? The intrigue is only heightened when the stranger presses upon Immanuel a pen that writes in invisible ink.

The author’s erudition—he’s a former director of Stockholm’s Museum of Modern Art—is evident in his lucid descriptions of Swedish cityscapes. With its émigrés, politicos, and covert operators from across Europe, Birnbaum’s Stockholm is alive with cosmopolitan sophistication and ambient menace. Within months in 1939, he writes, “this little metropolis in the far north” becomes “Europe’s most densely populated and frenzied hub for all manner of information exchange.” Amid the commotion, newcomers savor fleeting moments of pleasure. In one delicious scene, Immanuel and his colleagues assess the merits of Stockholm’s baked sweets.

This novel’s flaws—none of which can be blamed on Deborah Bragan-Turner’s graceful translation from the Swedish original—are minor but hard to miss. Birnbaum’s characters occasionally talk as if they’re reading from prepared remarks, their speech dense with exposition—and, as a result, rather leaden. Meanwhile, he introduces new characters at a dizzying rate—at least ten people are introduced or alluded to by name in the opening twenty pages. But Dr. B. succeeds by seamlessly melding espionage fiction tropes to literary intrigue and an attentive portrait of an ordinary man faced with life-threatening challenges. Birnbaum’s afterword about his grandfather adds rich real-life details to this intelligent narrative.