A Song by the Aegean Sea: A Book of Poetry by Mohamed Metwalli 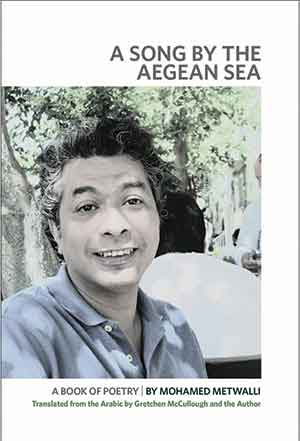 IT IS RARE THAT a cover captures the essence of a poetry collection as well as does the photograph adorning the front cover of Mohamed Metwalli’s newest collection, first published in Arabic in 2015 (see WLT, May 2018, 26). The gentle, almost imperceptible coloring of the image shows the poet’s smiling face balancing his humor with the wistfulness of a writer who reaches out to grab images that capture vanishing yet vital moments. Equally importantly, it places the poet in what appears to be a seaside café in the sunshine of the Aegean. This location is what makes this particular collection so different for this poet, who is based in the megacity of Cairo. While never appearing directly in this book, the noise and chaotic intensity of the poet’s urban home provides the unspoken contrast that allows him to write with the clarity and dexterity of his Aegean retreat.

What stands out about this poetry collection is the way it is so complete; not just in the way it represents the visions of a poet-visitor exploring a single new location but also in the way specific images and sensations are revisited throughout the poems. This is not a selection of poems brought together because it is time for the writer to bring out a new volume. It is like a song cycle that, while changing forms, is always very much in the writer’s voice and has one constant linking theme.

In his poems, Metwalli employs long trailing sentences that can meander delicately around the beauty and sordidness of a place to create a vision that is like a collection of fading Polaroids, capturing the reality of moments that are at once both intense and fleeting. These long sentence structures work so well in Arabic but can be a nightmare to a translator. Here, the careful process of the translator working together with the poet has resulted in poems that are accessible yet intense, encouraging the reader to quickly revisit the poems to see how and why Metwalli reuses the images like feral dogs, larks and ravens, and the occasional scorpion fish across the collection. The short translator’s introduction by McCullough is useful to readers who are new to Metwalli’s work, and it also sheds light on her process of translating a poet who is so international in his reference points.

What I find particularly effective in these poems (which has always been the case in Metwalli’s work) are the changes of focus onto different parts of the visions he selects. In this collection, it can be a swift move from the vast seascapes of the Aegean to the minutiae of seafront detritus such as scraps of paper or pieces of leftover chicken:

Like stars in the distance
And a full moon behind four drunks
Just out of “Deniz Restaurant”
—Which rip tourists off in broad
daylight—
Crooning a song from the seventies
Aiming their throats towards the dark
sea;
No waves in the bay of Izmir
Just a few lampposts
A few fat dogs and garbage men
One single reaction
Was a licentious female giggle
In a nearby room . . .

This contrast of constantly moving foci so clearly reflects that sensation one gets when feeling so very much alive in a place but then realizing that in the lifespan of a historical town like Izmir, you are not even as significant as the scraps of food that the gulls fly down to consume. Metwalli’s poems allow the reader to embrace this glorious experience of ephemeral humanity or, as he puts it, “our shelf life.”

While mainly about the experiences of contemporary Izmir, some of the poems explore the place’s complex past, which helps ground the collection in its geographical and historical location. Despite this, there is also a sense that this could be any Mediterranean coastal city and from any time. In this collection we see a writer embracing the lighter side of Mediterranean decadence to view the humanity among the tourists, fishermen, and sex workers who inhabit the seafront. In the style and focus of his poetry, Metwalli is a poet toasting fellow writers who have found respite on the shores of the Mediterranean through the ages from the intensity and mercilessness of their regular urban life.