Toño the Infallible by Evelio Rosero 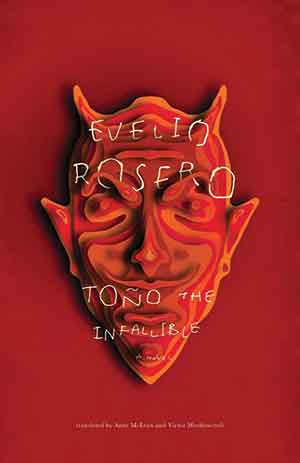 EVELIO ROSERO, AUTHOR of more than thirty books and winner of Colombia’s National Literary Prize, often writes about his country’s civil discord. In 2009 he released The Armies, a powerful commentary about the violence associated with Colombia’s government.

Toño the Infallible can be seen as the author’s continued reaction to Colombia’s brutal, crime-ridden society, which includes widespread police corruption: “In this country, justice collaborates with the monsters, and why not? It’s in the hands of monsters. A reality in my favor,” Toño, the evil, eponymous character boasts about a meager twenty-minute police investigation regarding a kidnapped girl. The author also remembers the disappeared people—forty-five thousand buried in mass graves—resulting from internal armed conflict: “As we crossed the dark grove, she told me all the warnings her embassy had issued in relation to the disappearances. They frighten me, she said. It’s far worse, [Toño] said. In this country foreigners aren’t just kidnapped, they’re also roasted, carved up and eaten.”

Toño Ciruelo is the character through whom the author channels his feelings about Colombia’s violent society with satirical prose reminiscent of Swift’s in A Modest Proposal. The novel opens with Eri, a writer and childhood acquaintance, introducing Toño to readers: “I was alone when someone pounded on my door. Who could it be? Nobody had called at this house for a century. . . . It was Antonio Ciruelo; it couldn’t be. It was Toño. Toño the Infallible, Crack-of-Dawn Toño, Toño the Ubiquitous, sickeningly, Toño.” Because Eri has not seen Toño in twenty years, it is important for the author to set the mood with this opening passage. In addition, Toño divulges, early on, that his father was a cross-dresser, which could be the root of his abnormal behavior, but Toño mysteriously declares that “it was me who put on that silky underwear, Eri, not papa,” displaying the author’s sleight of hand in exposing Toño’s true persona.

Through flashbacks, Eri attempts to set the record straight, beginning with the mysterious death of Toño’s sister and a trip to the Caribbean Sea, where Eri and another friend witness Toño peering under a bride’s dress. The trio then take in the Grotto of Our Dancing Lord, a spiritual event where armless and legless people convene, believing that a miracle could make them whole again. In the temple, Toño commits blasphemy by scratching the Lord’s image, provoking the infirmed to charge after him: “[Toño] charged forward, knocking them over as he went, sending them flying at first, then falling down, muffled rag dolls; I heard bags of flesh, I’ll never forget the sound of bodies and crutches crashing down. He took pleasure in thumping the jaw of more than one of them.” Violent acts like this are threaded throughout the novel. There is even a chapter dedicated to Toño’s Exhibition of Pain, “Unfurling like blood-soaked flowers before the eyes of the defenseless ticket holders.” Toño’s creation features displays of the Holocaust, Joseph Stalin, and Idi Amin. If that was not enough, he reenacts scenes of rape, beheadings, and impaled children, “the climactic moment of the exhibition.”

Eri’s narrative makes it apparent that Toño, if guilty of these acts, is a full-fledged psychopath: he steals his friends’ girlfriends, makes moves on mothers, claims he slept with “sixteen nuns a day in the audacious medieval fashion,” and he killed thirty girlfriends.

Through his dreamlike prose, the author creates a bona fide foil in Eri, who illuminates Toño’s psychopathy. Rosero does, however, leave it to the reader to discern if Toño did, in fact, commit the heinous crimes, or if the tale of Toño is legend and just the vessel Rosero uses to express his feelings about Colombia’s government. Either way, Rosero has created a memorable character as evil as Lord Voldemort and as violent as Anton Chigurh.