Why the Assembly Disbanded by Roberto Tejada 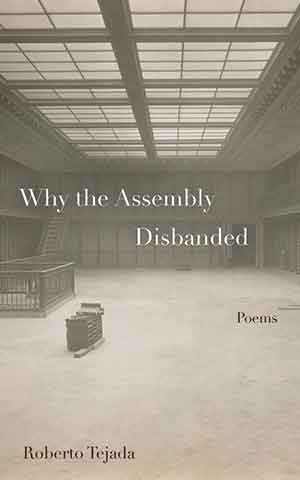 “TWO GUARDIANS,” the opening poem of Roberto Tejada’s Why the Assembly Disbanded, brings together the twin motifs of his new book—assemblage and assembly—to trouble the relationship between art and belonging. With a chiseled yet feral sense of technique, Tejada asks if it is possible, given the inhospitality of the United States to people living within, on, and far from its borders, for artists to co-create—the title of the book’s first section—a “Society of Alternate Belonging.” Much like the rest of the book, this poem is riven with doubt about art-making as the antidote: “What I infer can never altogether establish a space adequate / to the body count.” Implicit in the poems that follow is the knowledge that the body count since the resurgence of white supremacy—in the aftermath of colonizing the Americas—has become unbearable.

This doubt speaks to what Tejada calls the “lexical resistance” of his assemblage technique, where each sentence is a complete gesture, as if a sentence-long lyric, yet the sentences woven together as a whole have the illogic and urgency of a dream. At the same time, Why the Assembly Disbanded is as ecstatic as it is skeptical. The final sentences of “Two Guardians,” for instance, speak to the succor of alternate belonging: “I weather compliant. I rally.” Images of processions and mass actions have entranced Tejada across his oeuvre: here, the double meaning of “rally” is precisely what a sense of assembly encourages, where the speaker rallies—finds joy—in the instance or possibility of rallying alongside others.

The assembly of the book’s title, having been (or vulnerable to being) disbanded, brings to mind a speculative society of alternate belonging as much as the reality of an immigrant family cracking under the pressure of middle-class assimilation. The unavoidable complicity of such an assimilation is achingly evoked in “American Household,” which begins with the indelible lines “Here I’m untethered, or else this American household is. / A shame for guest and resident alike, torn asunder” before asking “Whether cash & cake were meant for us the undeserving.”

As “American Household” moves toward its startling conclusion, Tejada’s assemblage technique heightens the urgency of the poem. The periods between sentences, as if stopgaps, begin to vanish in the poem’s turn: “Other plum for which we are to wait again our turn in / Line and still the others keep cutting ahead of us here / The complected & other-tongued asylum-seeking // Assembly of the glad in ordinary deliverance from fear: / First fuel in the plot that turns us into tyrants unspeaking / Yet another dream to make them do what in wakeful hour / Is lawless for us depraved and still deprived of power.” By the poem’s end, the ferocity of the final image speaks to the despair—and shame—that arises from knowing that the advantage for a minority in power of assimilating only some of the other is divide et impera: divide and conquer.

In the wake of the 66 Signs of Neon exhibition at the 1966 Watts Festival, Tejada became interested in assemblage art as the “eruption of a counterform,” an Amiri Baraka phrase that undergirds the book’s structure and which the striking poem “Baraka Inscape” itself samples. The 66 Signs of Neon exhibit used the form of assemblage—“a style of self-determination against the brutal machinery of institutional racism and geographical segregation,” Tejada writes—in order to create assembly: “a network of friendships and intersections between Black, Asian American, and Chicanx artists in Los Angeles,” the city of Tejada’s earliest gestures as a poet.

In that spirit, Why the Assembly Disbanded has an interlude of photographs by artists such as Connie Samaras and Rubén Ortiz-Torres, whose work inspired Tejada’s compelling long poem, “The Lost Continent.” Comprised of tercets, it exhibits Tejada’s incisive sense of humor where “the fiberglass capital” is a prelude to “the modest epic most immediate of our demise.” Here, a joke about colonialism—“queen’s bishop to Huitzilopochtli!”—shares a poetic continent with the mock-serious announcement, “It was time for my replacement / mother (a cactus, flesh that wasn’t flesh from the flaming mortar / of antiquity).”

That Tejada’s new book faces up to constant threats to assembly—whether that assembly is of artists, immigrants, or outsiders in the society of alternate belonging—makes the playfulness of his assemblage all the more powerful.