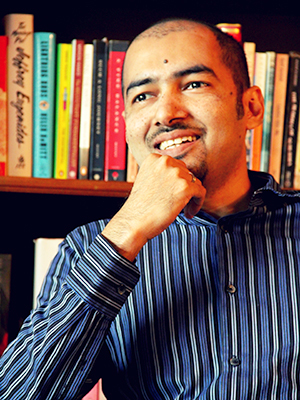 Last Thursday, the second annual Dhaka Hay Festival opened with a moderated dialogue between Pakistani novelist Mohammed Hanif and the most exciting new Bangladeshi talent writing in English, K. Anis Ahmed, whose first collection of short stories, Good Night, Mr. Kissinger, was published the week before last. Moderated by the Telegraph’s Sameer Rahim, the two writers discussed the subject of assassinations in literature, focusing on Hanif’s novel, A Case of Exploding Mangos, about the assassination of former Pakistani president General Muhammad Zia-ul-Haq, and the namesake story of Ahmed’s Good Night, Mr. Kissinger, featuring an angry Bangladeshi waiter in New York City with an opportunity to assassinate Henry Kissinger, the American head of state whose passivity resulted in the 1971 massacre of thousands of Bangladeshis by the army of Pakistan, at that time an important strategic ally of the United States. The writers used their topic to springboard toward a wide range of issues, including the Bengali tradition of socially engaged writing, which Ahmed admits he often finds boring, the Pakistani culture’s love of conspiracy theories, and even the Petraeus affair. (Hanif: “You kill a couple million people and no one cares, then you have a fling with your biographer and everybody goes crazy. What else do you do with your biographer?”)

I recently had the opportunity to ask Ahmed a handful of questions about his new book of short stories, and its place in contemporary Bangladeshi literature.

You’ve said, “That Bangladesh should finally get noticed by the world for its writing in English is both a bit surprising and ironic.” Why’s that?

Bangladesh’s independence was triggered by a Language Movement in 1952. On February 21 of that year, students gave their lives to protest the hegemonic demotion of Bangla by their West Pakistani rulers. So in post-independence Bangladesh, there was a certain protectiveness of Bangla that deemphasized English and other languages. Bangla has a great heritage and developed literature. Yet despite this history and pedigree, Bangla writers have not succeeded in engaging the literary interest of the greater world. Arguably, due to their protectiveness, they were not keen to do so. For the younger generation of Bangladeshis, however, there is an engagement with the outside world through which they are cultivating their own unique vocabulary and idiom for their experiences. Many of the most successful of these exponents are writing in English. What is ironic is that because these writers are getting noticed in English, they are building the missing bridge for Bangla, too, to reach the outer world.

What’s the relationship between Bengali- and English-language literature in contemporary Bangladesh?

In the 1980s and ’90s, when Indian writing in English started making a splash globally, I remember that Bangla writers would often comment that while English could be a language for India, it would never be one for Bangladesh. There has also always been a coterie of vernacularists across the subcontinent who believe that any expression in English can never be quite true to experience of the “ordinary person” the way that the vernacular can. Many Bangla writers also shared that sentiment until the 1990s. These feelings are not entirely unfounded, because this region’s English-language fiction can at times read too much like “native informant” tracts. In recent years, however, Bangla writers have started to see English not as something inherently illegitimate or inferior. English writers, too, continue to find part of their inspiration in the local languages, at least those of them, like me, who grew up deeply steeped in Bangla. Translation in both directions is also starting to get more attention. We are on the verge of learning to move away from essentialist assumptions and toward a richer dialogue in both languages.

Tell me about Good Night, Mr. Kissinger. How do you, as its author, see it fitting into contemporary Bangladeshi literature?

A great deal of Bangla writing has been about rural realism. Especially up until the 1980s, vernacular reports of rural life were seen to be the only kind of serious writing. In recent decades, even as cities started receiving attention, there was again an emphasis on looking at the lives of the working class or slum dwellers. This idea that writing about the subaltern is somehow more authentic is frankly rather simplistic and confuses the purpose of fiction with that of journalism or social science.

I see my collection of stories as part of a new brand of writing in which characters are drawn mainly from the educated, urban, middle and upper classes. But it is not about these characters as representatives of any particular class, though the stories fully recognize the way structures of power or privilege can enable or disable individuals. My stories trace Dhaka’s evolution from a charming and idyllic little outpost to the dubious fame of being the world’s most populated and most unlivable city.

The Dhaka Hay Festival continued through 17 November, featuring a wide range of artists and thinkers, including Vikram Seth, Shehan Karunatilaka, Gillian Clarke, Kuldip Nayar, Bedabrata Pain, and many others.