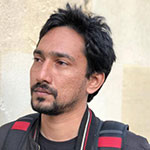 Hussain Haidry is a poet, screenwriter, and lyricist. He was head of finance at a healthcare company in Kolkata until he left his job and moved to Mumbai to become a full-time writer. He started his career by performing at spoken-word poetry forums in Mumbai such as Kommune, then went on to write lyrics for films like Gurgaon, Qarib Qarib Single, and Mukkabaaz and web series like Chacha Vidhaayak Hai Humaare, Yeh Meri Family, and Tripling. As a screenwriter, he has co-written the Amazon web series Laakhon Mein Ek (season two) and is presently working on the dialogues of the film Takht.

Photos by Pierpaolo Florio A novelist living in quarantine in Florence looks back at Italy’s cultural history and then forward, considering...
March 23, 2020 | Baret Magarian
Interviews

Hope Is the Most Powerful Arrow: A Conversation with Joshua Wong and Jason Y. Ng

The Aunt Who Wouldn’t Die (John Murray, 2019), by Shirshendu Mukhopadhyay, translated from the original Bangla by Arunava Sinha, is a fast-...
March 10, 2020 | Apala Bhowmick