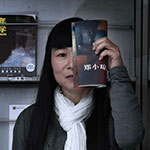 Born in rural Nanchong, Sichuan Province, Zheng Xiaoqiong went to work in factories in Guangdong, where she became a migrant worker for seven years. She has published twelve books of poetry, and her work has won numerous awards. Her poems have been translated into many languages, including German, French, Japanese, Korean, Malay, Russian, Spanish, Turkish, and Vietnamese.

Corona Avenue, Queens / Photos by David Rohlfing (1) On the longest day of the longest year, I did not sleep. I stood as witness with the...
June 24, 2020 | Joseph O. Legaspi
Black Voices