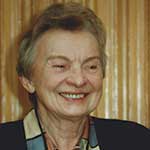 Zofia Romanowicz (Radom, Poland, 18 October 1922 – Lailly-en-Val, France, 28 March 2010) was arrested by the Nazis in January 1941 and imprisoned for resistance activities. In April 1942 she was deported to Ravensbrück, and in September 1943 she was transferred to Neu-Rohlau. There, while working in a china factory, she wrote the premonitory poem “For My Little Girl . . .” She escaped in the spring of 1945 during an evacuation march and was taken to Rome. In 1946 she settled in Paris. Together with her husband, Kazimierz Romanowicz, they managed the bookstore and publishing house Libella and the Galerie Lambert for nearly fifty years. She wrote eleven novels and numerous short stories and poems. She was awarded the Kościelski Award in 1964 and the Prize of the Polish Ministry of Culture & National Heritage in 2001 for the totality of her work.