A Short Tale of Shame by Angel Igov 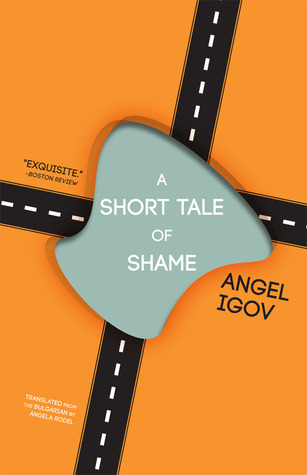 While on an aimless drive, Krustev stops to pick up the three hitchhiking students, who are taking a year off to decide whether college is the path they should pursue. Through the small talk that accompanies such casual encounters, it is revealed that the four are connected through Boris’s daughter and the young peoples’ former classmate, Elena. The exuberant mood of Sirma, Maya, and Spartacus becomes dampened, but Krustev suspects nothing is amiss. What, we wonder, could be the dirty little secret the hitchhikers seem to keep? For one, there are “the mysteries,” a regular happening between the three friends.

They were supposed to be tomorrow, they would have to look for a secluded place
tomorrow night and play out the ritual of their intimacy, theatrics which [Sirma]
had made up without much hope that the others would go along with it, but now
look, it had been two years and they had done it every month since Elena had left
them, up until this week, when they had come across her father and he simply set off
with them . . .

I found no shame in this slim novel, though I willed the disgrace upon the sad Krustev. With his adulteress wife having just passed away and his daughter not being on speaking terms with him while she lives in the United States, Krustev’s life seems ripe for a scandalous midlife crisis. He’s on the road with three adrift youth, after all, two of whom happen to be attractive and sexually active women. Each page brings a delightful, anticipated dread that something untoward may happen between Krustev and one or both of the girls, if not all three of his new companions. Now that could be shameful.

Maya said that she thought she had forgotten her bathing suit. As if we haven’t seen you without your bathing suit on, Spartacus replied, then realized that they weren’t alone and fell silent, embarrassed. The three of them seemed to spend so much time together that when they found themselves with other people, they quickly forgot about the others’ presence. With the involuntary habit of the male imagination, Krustev envisioned the girl sitting next to him without her bathing suit for an instant and felt uncomfortable about it, as if he had made her an indecent proposal. She was his daughter’s age.

Shame unfolds in smooth, swooping curves, like a car humming along on a newly paved highway. Credit Angela Rodel, who translated from the Bulgarian, for maintaining an even tone and steady pacing, which accurately reflects the slowly evolving mindsets of the four central figures as they cruise along the Aegean coast.

In the end, the characters, having traveled over land and by ferry over many days, discover not a sense of shame but rather a renewed sense of self. There is no crash at the end of their drive; instead, there is liftoff.

Shaun Randol is the founder and editor of The Mantle. He is also an Associate Fellow at the World Policy Institute in New York City, and a member of the National Book Critics Circle and the PEN American Center.