When Juan de Ayala passed through the Golden Gate on August 5, 1775, he didn’t see a Morus bassanus, un Fou de Bassan, or un Alcatrace from the suliformes order, but a Pelecanus, un pélican, un pelícano, a brown pelican from the pelicaniformes order. The etymology of the place-name goes back to Andalusian Arabic, either الْغَطَّا al-ḡaṭṭās, “the diver” or sea-eagle, or else القطر al-qatras, the albatross. These birds were indeed pelicans, not gannets or albatrosses. A group of people greeted Ayala and his crew from the shores of what today is called Angel Island.

The descendants of these people, the Ohlone—a Miwok word meaning “western people”—still do so and have been enjoying this pristine beauty for thousands of years. Only temporary housing was built on Angel Island, and since we were in August one can think that it had been a summer place. Across, a short canoe ride away, lies the now (in)famous and re- and misnamed Island of Alcatraz where the brown pelicans were numerous. Bird calls, birds call, birds from different continents whose fate is about to intertwine. Today we pick up this thread triggered by the fiftieth anniversary of Alcatraz and enter a histogeopolitoarcheogeological rabbit hole. We tried to look into all the recesses; here are our accumulated notes, like different geological layers, that we are trying to braid into a meaning possibly useful for present action.

Where were we in November 1969? One of us, a Luxembourg expat, born in France, was stuck in the East Village, editing the underground newspaper CORPUS, obsessed with poetry, Vietnam, dope, rock ’n’ roll, etc.—with Alcatraz a news blur, applauded, ah yes, a Native American uprising, another side of the revolution in progress—but by now all the names gone, all the facts gone, except for that name, Alcatraz, Alcatraz . . . and the other one of us in her small town in the French Pyrenees where she was born and raised, doing what you do there as a troubled nine-year-old and for whom America was a flag planted on the moon. Together now, birds of different feathers that met and then mated on the North Coast of San Diego, California, in 1989. A place Ayala visited 220 years ago as he had been part of the Sacred Expedition to San Diego in 1769.

And now, here, we are (back) in New York, identifying calls, looking up names, digging the multilanguaged plumage, wanting to bring meaning to light:

History means TheirStory—a lasso with noose or nous for our and the planet’s neck braided by all these variegated strands of events.

Even if Coleridge and Baudelaire had not yet put that albatross where it does not belong: around our necks. What does come to mind, sitting on another shore, is a line by Charles Olson: “Limits are what each one of us is inside of,” now changing into “History is what each one of us is inside of.” And not only each one of us, we all, together, and the rest too—all the way back to the stones and their history and the history of the grasses and the birds. History means TheirStory—a lasso with noose or nous for our and the planet’s neck braided by all these variegated strands of events.[ii]

After some difficulties Ayala managed to anchor the packet-boat San Carlos next to Angel Island, which he named after Our Lady of the Angels and whose Native name appears to be lost. He sent off Vicente Santa Maria, the Franciscan friar and diarist onboard, to go ashore to meet the friendly greeters: “From the shore’s edge, some Indians begged us with the heartiest of shouts and gesticulations to come ashore.” And later on the friar reported in his journal: “They were not dumfounded (though naturally apprehensive at the sight of people strange to them); rather, one of them, raising his voice, began with much gesticulation to make a long speech in his language, so outlandish that none of it could be understood.” Of course they were “not dumbfounded,” as they most certainly had heard the news of these white people sailing up the coast. And we well know—the facts and documents prove it—that the Spaniards’ mission was not to “understand” these gracious hosts. Since 1492, Bible and sword in hand, the colonial efforts have mocked, ignored, denied, appropriated, ripped-off, displaced, abused, enslaved, raped, killed Native populations and deeply damaged the land, soiled the waters . . . the list of human, ecological and cultural destructions is horrendous—and no end to the degradations in sight.

The colonization of Ohlone territories came late in the story of the conquest. The Spaniards’ true motivation was to claim this land before the Russians and the Brits could. Though they entered the bay only on that day in 1775, the territory had been claimed by the Spanish Empire since 1542, when Juan Rodríguez Cabrillo navigated the coast on behalf of the empire.

The Muwekma Ohlone tribe is the contemporary tribal organization of the indigenous Ohlone peoples of the San Francisco Bay area (predominantly East and South Bay lineages). The tribe had been federally recognized as a sovereign Native American Nation in 1906, then identified as the Verona Band of Indians of Alameda County, historically [euro-]documented as living in the Bay Area since the late 1700s. But in May 1927 the Washington, DC, office of the BIA directed Sacramento superintendent colonel Lafayette A. Dorrington to list all tribes and bands in his agency’s area that had not yet obtained a land base. The Verona band was among 135 groups that Dorrington listed as having no land, “yet not needing land.”[iii] The tribe has petitioned for federal recognition multiple times and continues to be denied by the BIA.[iv]

Of the more than twenty thousand Ohlonean-speaking people who inhabited the San Francisco/Monterey Bay regions in 1769, less than two thousand were left by 1810.[v]

When visiting the Bay Area, it is not enough to think of Alcatraz while riding on a bus crossing the Golden Gate even if it is to visit a dying friend in the shadow of Mount Tamalpais. Which is a Coast Miwok name, támal pájiṣ, literally meaning “west hill.” Always that eerie feeling when driving around this continent that the Native humans have been disappeared, their traces visible mainly as silently inscribed in toponyms. At least in parts of the country: in California the Hispanicization of Ohlone geography purposefully and relentlessly erased and replaced Native names.[vi] But today this is reversing as the Ohlone people are now deeply involved with the archaeology of their lands, actively participating in the excavations and renaming sites. Thus in 2008 the archaeological and burial recovery program [CA-SCL-869] recovered four elderly ancestral Ohlone Indian women.[vii] To honor them the site was renamed by the Muwekma Tribal Language Committee Katwás Ketneymas Waréeptak, which means “The Four Elderly Women” or the “four Matriarchs” as the alternative native name for this site.

Always that eerie feeling when driving around this continent that the Native humans have been disappeared, their traces visible mainly as silently inscribed in toponyms.

But are the stories of this past useful to the present? Decolonization of practice is a necessity, and elemental imagination must be extracted from nonobvious reality. Below is a list of dates extracted from this research-and-writing journey, and we connect them through our imagination, detect or create patterns. To try to set them in relation as concentric or intersecting circles, linking different realms, the geological, the biological, and their intersections, thinking of Alcatraz, first misnamed by Euro-invaders on August 5, 1775. With that as frame, as center, draw the year-lines back and forth and around—bind that date, shackle it:

The tectonic history of the complex Ohlone societies is traced back to four thousand years ago. Oral transmission has it that the island was visited for food-gathering, especially bird eggs and sea life; it might also have been utilized as a place of isolation or banishment for members violating tribal laws. Or as a hiding place to escape the forced Christianity imposed upon them.

Starting with the awareness of the Alcatraz terrane as part of California’s Franciscan complex, Alcatraz sits on metamorphic rocks laced with protolithic ideas. Alcatraz is not ONE rock but layers of thick-bedded sandstones where colonial interference runs deep and thick. An ancient subduction zone that existed since the early Cretaceous (a period that stretched from about 125 to 60 million years ago). By the end of the Cretaceous period the uplift of the ranges and its consequent erosion begin. The configuration of the Coast Range starts during the Tertiary period, exposing again the Franciscan rocks that once were deeply buried. By then, the fault system is also already formed. Although the uplift of most of the ranges continued during the Quaternary period, there were also areas that sank around San Francisco Bay, and the Pacific Ocean invaded them.

Alcatraz Island is nothing but the top of an ancient hill that was submerged at that time. From then on, the bay was alternately emptied or filled depending on glacier surges and regressions that in turn determined more or less available water in the sea.[x]

Fast-forward to 1973 with a tiny insert in the NYT: 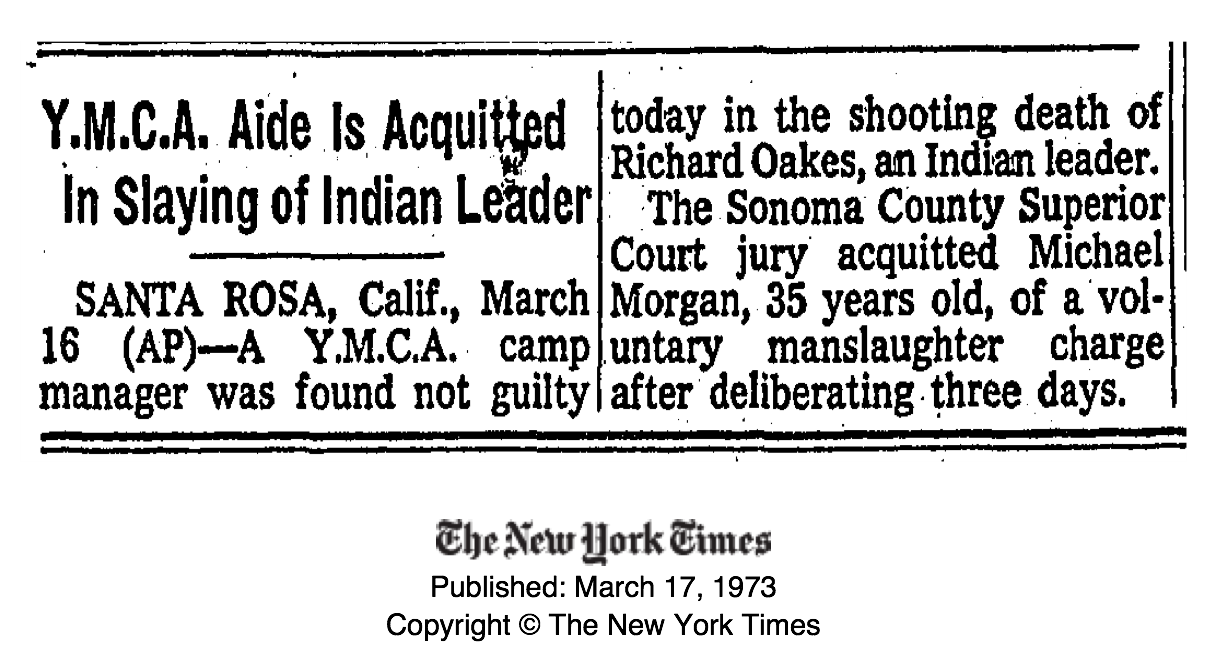 Richard Oakes, who led the occupation of Alcatraz Island assassinated sans merci, sans merci a year earlier.[xi] Where is Michael Morgan today? At a MAGA rally?

When will the Ohlone Tribe regain federal recognition?
And yet, we remember and learn:
The Ohlone teach us resistance and persistence.
Which lead us back to Alcatraz.
Alcatraz is the Island of Pelicans.
Pelicans and their thirty-million-year history teach us.
A pelican in your dreams, one Native dream interpretation suggests,
indicates selflessness and how to you put yourself before others.
An affirming vision of the possibility of sharing and caring.

[ii] Thank you, Edward Dorn, who used this homophony in his “Recollections of Gran Apacheria.”

[vi] Les W. Field with Alan Leventhal and Rosemary Cambra, Mapping Erasure: The Power of Nominative Cartography in the Past and Present of the Muwekma Ohlones of the San Francisco Bay Area.

[viii] “According to ethnohistoric research conducted by Millken and others, an expedition led by Gaspar de Portolá and Father Juan Crespi had traveled north along the California coast north of Monterey and on October 23, 1769, encountered the Quiroste Ohlone village of Mitenne near Punta de Año Nuevo (New Year’s Point)” (www.dd-osteology.com/pdf/CA-SCL-287%20-%20CA-SMA-263%20Report.PDF). Nicole Peyrafitte and Pierre Joris have been collaborators in life and art for more than a quarter-century now and residents of Bay Ridge, Brooklyn, for the last twelve years. They are presently working on Domopoetics-Karstic Action, an installation-performance.