Day of the Living Dead 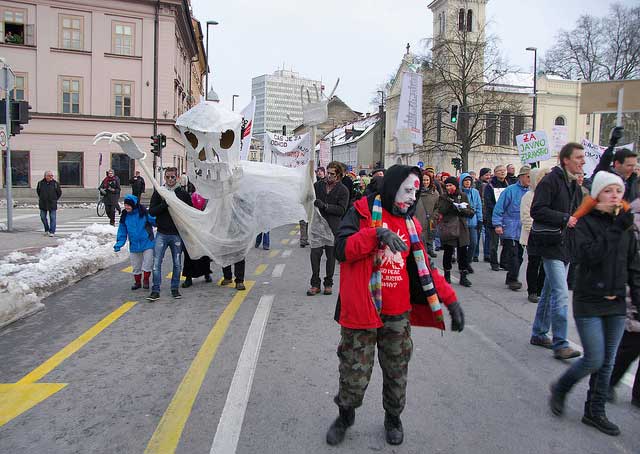 With political elites in power who, many claim, were out of touch with the people, the small, Adriatic country of Slovenia staged a zombie uprising in late 2012 and into the spring of 2013. At first, mostly peaceful protesters gathered to voice their dissatisfaction with the government in Maribor. But when officials dismissed them as “communist zombies,” the people responded, coming out in record numbers to demand change across the country. To thumb their nose at authorities, they came dressed as zombies. As unemployment rose—particularly among young adults—and many voiced dissatisfaction with their jobs, Slovene writer Miha Mazzini put pen to paper and picked up on the zeitgeist of the moment in mid-2013, drafting “Day of the Living Dead”—a quieter look at the life of an everyday worker in a Slovene office, who begins to wonder exactly what has happened to her co-worker in the cubicle next door.

The day she spent with the corpse was the most awful day of her life. She noticed that her co-worker on the right didn’t show up for work, and during her lunch break another of her co-workers told her that he’d died. She remembered the slightly musty smell that had sometimes wafted up from behind the partition, and she had thought that morning that maybe he’d been smoking. Every day, at exactly 11, she heard him open the lid of a plastic container, and within fifteen minutes a spoon began to rub against its corners. This was followed by a short slurp, and the container was snapped shut. At 11:30, she could hear his typing again.

His lunch noises always stimulated her stomach juices, and so she didn’t even realize why she wasn’t hungry today, even as her colleagues left for break.

She caught herself listening to the silence on the other side of the partition, and she asked herself if he’d had a family—was anyone mourning for him? She quickly became absorbed in filling out her form with a giant red heading and a lively corporate logo, followed by an extensive body and brief lower part with fine print.

On the third morning, he sat in his cubicle and typed. He nodded in greeting to her, as always, and she felt relieved because her other colleague had been mistaken. He must have fallen ill, probably seriously, since he appeared pale as wax. The heavy odor of flowers and moisture surrounded her and rushed in her nose until she became accustomed to it.

She almost missed lunch again, as her co-worker did not eat, and his typing continued uninterrupted. She mentioned to the colleague who proclaimed him dead that he had returned, but the colleague rebuffed the idea with laughter, and their other co-workers followed suit.

She became silent and remembered that she had access to employee records and that she could even look at the medical notes that he had turned in.

Before she began the next day’s forms, she searched the database and looked for one with a feeling of guilt.

DECEASED, it said. It was followed by a date from the beginning of the week.

Frightened, she gasped and became aware of the strange smell wafting under her nose.

She stood up and stretched, which she hardly ever did. With her left hand, she leaned against the wall and looked through the fenced honeycombs of the partition that extended over to her corner.

She quickly looked to the right. With his head bowed, he was filling out a form, quite similar to her own.

Had she really caught sight of a lump of soil amid a swath of thin gray hair, which rested on his skull as if drawn with a thin pencil?

She continued with her work, distracted, having to read each form several times over,  wondering why she had entered data into the wrong field entirely.

It could not have happened any other way: on the third day, he rose from the grave and came back to work.

If the good went to heaven and the bad went to hell, did the nondescript have to continue on with the work that they did when they were still alive?

“Oh my God!” she sighed and thought of her grandmother and the way she’d explained the basics of the rewards of the afterlife. If the good went to heaven and the bad went to hell, did the nondescript have to continue on with the work that they did when they were still alive?

Why did they conceal something so basic from her?

She felt like she was beginning to choke and had to get up. At the other end of the hall, the leader of the clique raised her head from her lunch and looked at her with raised brows, as if she were her boss.

She sat down heavily. How many were there out there like her co-worker? Coming out of their graves, regularly registering their arrival, going about their work (which no one ever noticed), swiping their attendance cards through the time clock by the exit, and returning to the cemetery?

A long time ago, back in her first year of work, she came to understand the only rule that ensured one’s existence within the corporation, the rule that each employee did well to learn as soon as possible: how to become invisible.  How to do an average job. How to not stand out. To realize that the only evalutator was the punch clock.

For the first time, she realized that the living dead were the ideal workers. It was not really strange, after all, that so many young people were unemployed.

For the first time, she realized that the living dead were the ideal workers. It was not really strange, after all, that so many young people were unemployed.

At lunch she had no appetite, and not only because her co-worker had not eaten. For the first time, the cafeteria seemed strangely empty for such a large corporation.

The day she spent with the corpse was the most awful day of her life. She couldn’t concentrate on her work; she incessantly asked herself, with vigilance, why she had to enter the same data in the header and the body of the document, here even in two places, when the corporation already had it anyway. Why use that form at all, that form to which she cut and pasted information from yet other forms, when the machine could do it faster and better? Where did the new forms keep coming from, and where did the ones that she filled out go? It was as if the forms were glued to a hamster wheel, a wheel on which she was constantly running, her feet typing with each step. And it was as if, at the first step forward, the fresh ink fell off the pages like dandruff, the sheets of paper coming back white and fresh with each rotation.

Since she wasn’t absorbed in thought, she couldn’t forget the passage of time, and the numbers in the corner of the screen turned as if stuck in molasses. She could feel every bone in her body and the tremor of every muscle, so much so that her sweat glands opened and cried over their own destiny.

The day she spent with the corpse was the most awful day of her life, but by the end of the week she had gotten used to it. From then on, until her own death—and even beyond that—she was no longer bothered.

Translation from the Slovene
By Kristina Zdravič Reardon

Miha Mazzini is the author of twenty-nine books in nine languages. His short stories have been published in many anthologies, including the 2011 Pushcart Prize anthology. Also a screenwriter and film director, Mazzini wrote the screenplays for two award-winning feature films.

At any given moment, words in three different languages were heard around the dinner table in writer Kristina Zdravič Reardon’s childhood. She finds that translating literature from her grandparents’ native Slovene and Spanish to English is a challenging—yet somehow natural—pursuit. Reardon holds an MFA from the University of New Hampshire and has been awarded a Fulbright translation grant and a summer fellowship from the National Endowment for the Humanities.