Migration, Home, and History through the Eyes of Philippine-American Artists 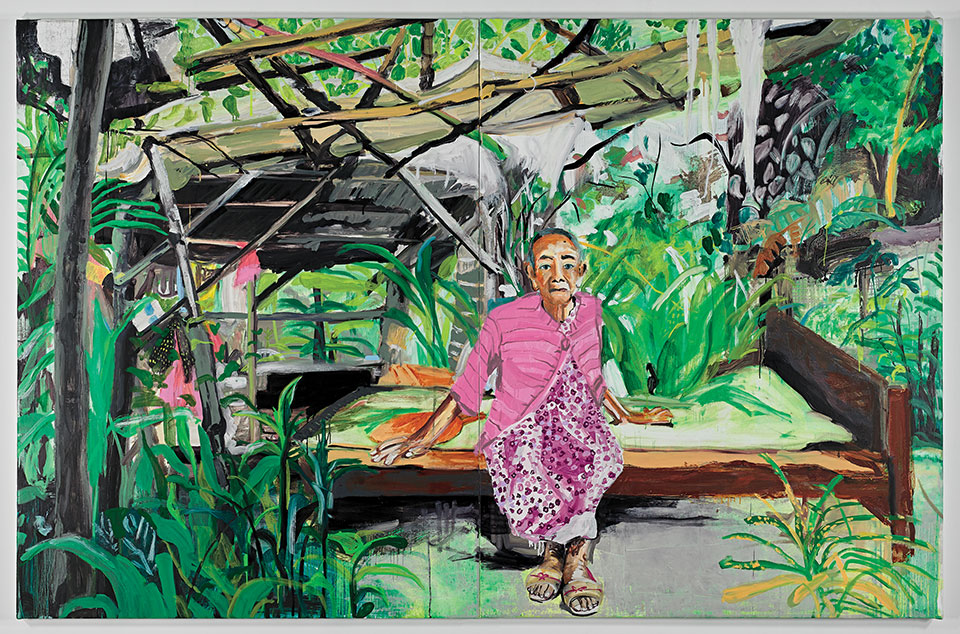 The Seer, by Maia Cruz Palileo

The March issue of World Literature Today is my first foray into my new role as art director at WLT, and I could not have asked for a better inaugural experience working on our Philippine-American literature section with guest editor Joseph O. Legaspi. Joseph introduced me to fantastic artists whose works span photography, painting, mixed media, and more, and I’m delighted to now share their works with all of you. Check out their recent artwork online—or for our readers in New York City, several of the artists below have their work in both solo and group exhibitions that you can see in person right now.

Jason Reblando is an artist and photographer based in Chicago and Bloomington-Normal, Illinois, and one of his most recent projects, New Deal Utopias, is a stunning hardcover book that explores—through Reblando’s lens—the Greenbelt Towns designed and built by the United States government to be model cities in the 1930s as part of the New Deal program. Reblando is the recipient of a US Fulbright Fellowship to the Philippines, an Artist Fellowship Award from the Illinois Arts Council, and a Community Arts Assistance Program grant from the City of Chicago Department of Cultural Affairs. His work has been published in the New York Times, the Los Angeles Times, Politico, Camera Austria, Slate, Bloomberg Businessweek, Marketplace, Real Simple, Places Journal, Chicago Magazine, the Chicago Tribune, the Chicago Reader, and now World Literature Today. His photographs are part of the collections in the Milwaukee Art Museum, the Midwest Photographers Project of the Museum of Contemporary Photography, and the Philadelphia Museum of Art. He teaches photography at Illinois State University and Illinois Wesleyan University.

Camille Hoffman’s work takes inspiration from the Philippine weaving and the Jewish folk traditions of her ancestors, and her works have a gorgeous textural depth and a complex, compelling narrative with the incorporation of mixed-media. Hoffman received her BFA in community arts and painting from California College of the Arts and her MFA in painting and printmaking from Yale School of Art in 2015. She has worked for over a decade as an arts educator and community organizer in Phoenix, the San Francisco Bay Area, New Haven, Brooklyn, and Queens. She was a recipient of the Carol Schlosberg Memorial Prize for excellence in Painting from Yale University, a National Endowment for the Arts scholarship, and a Benjamin A. Gilman International Scholarship. Hoffman has shown throughout the US and in Europe, and her first solo New York exhibition, Pieceable Kingdom, is open now through April 8 at the Museum of Arts and Design.

Born in the Philippines and currently residing in Brooklyn, Francis Estrada is a visual artist, museum educator at the Museum of Modern Art, and freelance educator of Filipino art and culture. His art featured in our issue is an untitled work on charcoal and paper that is part of his Umihi series. Estrada has a fine arts degree in painting and drawing from San Jose State University, and he has taught in a variety of studio, classroom, and museum settings to diverse audiences, including programs for adults with disabilities, cultural institutions, and after-school programs. He was also an administrator and educator at the Museum for African Art, where he enjoyed teaching about the amalgamation of art and culture through objects. Francis exhibits his work nationally, including online publications. His work focuses on culture, history, and perception.

Maia Cruz Palileo is a multidisciplinary, Brooklyn-based artist. Migration and the permeable concept of home are constant themes in her paintings, installations, sculptures, and drawings, and her work appears with three of the pieces in our special section. Influenced by the oral history of her family’s arrival in United States from the Philippines, as well as the history between the two countries, Palileo infuses these narratives using both memory and imagination. When stories and memories are subjected to time and constant retelling, the narratives become questionable, bordering the line between fact and fiction, while remaining cloaked in the convincingly familiar.

Palileo is a recipient of the Jerome Foundation Travel and Study Program Grant, Rema Hort Mann Foundation Emerging Artist Grant, NYFA Painting Fellowship, Joan Mitchell Foundation MFA Award and the Astraea Visual Arts Fund Award. She received an MFA in sculpture from Brooklyn College, City University of New York, and a BA in studio art at Mount Holyoke College, Massachusetts. Maia has participated in residencies at Skowhegan School of Painting and Sculpture, Maine, Lower East Side Print Shop, New York, Millay Colony, New York, and the Joan Mitchell Center, New Orleans. She is also part of a group exhibition at the Rubin Museum in New York City, and the exhibition, titled Face of the Future, will be open now through November 4.

Sara Jimenez is a multidisciplinary Filipina-Canadian artist currently living and working in New York. Jimenez works both collaboratively and individually, and through performance, installation, sculpture, and drawing, she investigates relationships between material impermanence and transcultural memory. Throughout her projects, she is interested in complicating and reimagining existing narratives around concepts of home, absence, and origins.

She received her BA from the University of Toronto (2008) and her MFA from Parsons the New School for Design (2013). Residencies include Brooklyn Art Space (2014), Wave Hill’s Winter Workspace (2015), a full artist fellowship to The Vermont Studio Center (2016), and the Bronx Museum’s AIM program (2016). Jimenez has exhibited at the Pinto Art Museum (Philippines), Rush Arts Gallery (NY), the Brooklyn Museum (NY), FiveMyles Gallery, and Wayfarers Gallery (NY). She has performed numerous venues including the Noguchi Museum, Dixon Place, and Smack Mellon. Her work is on display now through March 24 as part of the Historical Amnesia group exhibition curated by Gabriel de Guzman at Bronx Art Space in New York City.

Janna Añonuevo Langholz is a photo-based, interdisciplinary artist born and based in St. Louis, Missouri, and her work is on display now through March 2 at the Truman State University Art Gallery in Missouri. She received a BFA in Fibers from Truman State University in 2011 and received a full fellowship to attend graduate school at SMU Meadows School of the Arts in 2013. She received her MFA in 2015 with a concentration in photography. Her work explores her Filipino-American identity and relationship to place through photography and site-responsive interactions with architecture and the land.

Her work has been shown throughout the US in solo and group shows in St. Louis, Dallas, San Francisco, Portland, Taos (New Mexico), and Hilo (Hawaii). She received a fellowship from the artist program Signal Fire to participate in “unwalking” the Lewis & Clark trail from Oregon to eastern Montana during summer 2016. She is also the founder and editor of the Filipino American Artist Directory, an initiative to connect and promote Philippine-American artists in the US and beyond. In addition to her piece Burdock Needlepoint featured in our special section, we’ve also included her map from the artist directory, which illustrates Philippine/American transnational relations in arching, intermingling threads.