Around the World in 88 Languages: A Conversation with Luis de Miranda 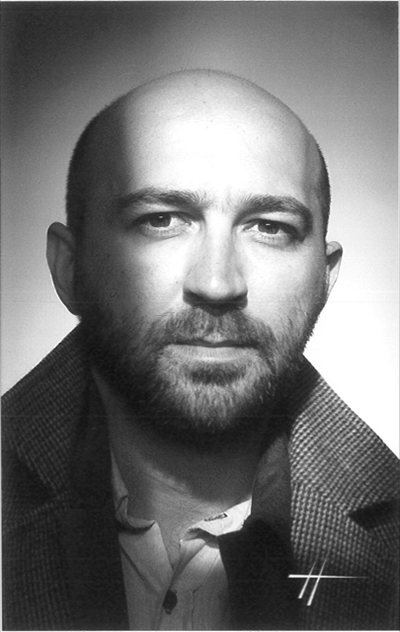 Six years after its initial French publication, Luis de Miranda’s novella Who Killed the Poet? (Qui a tué le poète?) is being translated into English and multiple other languages from around the world; eighty-eight to be precise. In this interview, Miranda shares his insights on the novella’s translation process into various languages, his insights on transgeographical storytelling, and his hope for the international future of Who Killed the Poet?

Anna Hernandez: When you were writing the book, did you already have the idea of translating it into multiple languages and shape your writing around that?

Luis de Miranda: The novella deals in part with the politics of language, by which I mean it’s an attempt to push the conventions of fiction to their poetical limit. I tried to invent a new way of telling a story/generating a political and existential alternative vision. This was done in French on a superficial level, but in fact is at least partly written in what the narrator calls the language of the Creal, “the verb of world-forming creators and poets of the real.”

From this point of view, the text is itself a transposition from common French into a poetical dialect with—ideally—a specific, unique personality but also a universal core. Before his disappearance Bardo, the character who is defined as the Poet, left a notebook with a singular form of writing that slowly colonizes the mind of the narrator (his secular twin brother). Bardo’s thoughts and emotions about his uncommon love adventure with Ophelia are, if possible, universally meaningful.

The feedback from the wonderful people who’ve worked or are currently working on the first translations in English, Turkish, Swedish, Hindi, or Greek is that the singularity of the poetic prose invented by Bardo seems universally transposable into unlimited languages and awakens the world-reader in all of us, if by world-reader we mean a deeper human phenomenology, more aware, earthly, and tolerant of creative forms of difference.

I didn’t write the text thinking about its translation into multiple languages, I wrote it as a translation of my own particular experience of life and love into a deeper common universal language, a form of transnational existential grammar.

I didn’t write the text thinking about its translation into multiple languages; I wrote it as a translation of my own particular experience of life and love into a deeper common universal language, a form of transnational existential grammar. This transgeographical message is in the end transposable into different human languages perhaps because there is a stage of universal symbolization, a poetic abstraction between the French original and the host language.

As this was my twelfth book, I was conscious, as I was writing it back in 2010, that it would perhaps be my last novel in French, a sort of a swan song if you will. I wanted to move away from writing in French, to explore and experiment with another language, to become a sort of beginner and dialectical newborn again. I shaped my writing around a thankful farewell to French and the idea that inventing a symbolic dialect beyond cultural barriers could lead to a cosmopolitical transnational contemporary myth.

Luis de Miranda: I worked closely with Tina Kover, the English translator, and we discussed several parts of the novella. But I always try to respect the translator’s voice, rather than impose anything, because a translation is not a photocopy into another language; it’s an act of guided authorship, of re-creation.

As a whole my impression is that each new translation creates a twin brother or sister of the original book—which is fine since the story is about our universal gemelity or twinhood and their combined power to co-create our social environment. I’m capable of getting a sense of the other ongoing translations because I read the language: Swedish, for example. But in certain cases, like Korean or Hindi, I confess I can only look at the beautiful characters and trust a few friends who can read these languages and tell me the translation is inspired. I also have an intuitive approach to translators and believe the text itself attracts the right people.

Anna Hernandez: Do you think by translating your book into other languages that certain elements get lost or altered in ways that change the story experience for the reader?

Luis de Miranda: Some elements might get lost and some elements become richer. In the end, I believe the essence of the text is preserved; at least it was in the first translation and the fully completed English one.

Because it’s a very concentrated novella, with a very strong general message and clear symbolism, the core architecture and emotions should be easy to replicate. What we’re doing through our project of 88 Translations is creating or reawakening a sort of universal reader. But this is a story about creating your own reality so it’s okay if the reader creates his or her own perspective on the myth.

Anna Hernandez: Since you are multilingual yourself, do you have a preference for which language you prefer when reading and writing?

Luis de Miranda: That’s a very interesting question. I was born in Portugal and for the first three years of my life I only spoke Portuguese, which I still do with my parents. I was then raised in France, and most of my writing until 2012–2013 was in French. This was a wonderful and at the same time difficult Parisian journey.

Over the course of several books my intention was to experiment with all the possibilities of French, until I became a sort of virtuoso. I realize it’s quite immodest of me to say that I became a virtuoso in the French language, but in fact it’s double-edged: virtuosity can easily become a form of more or less sterile preciosity or even nihilism (think of the novel À rebours by Joris-Karl Huysmans). So once I gave all I had—my swan song as I’ve said—in the writing of Qui a tué le poète?, I felt I longed for the humility of the beginner and the candor of the amateur again, and that’s why I moved to English, a language in which I’m far from being a virtuoso.

Around 2009, I found myself reading Shakespeare in English. It was like a healing balm, a deep breath into a new world of possibilities, and there are many references to Shakespeare in Who Killed the Poet?, a subtext if you like about my own voyage from French to English. I’m in my English period now—for example I wrote my PhD in English. I remain deeply respectful of the singular beauty of French, but all languages have their own immense beauty. Perhaps later in life I’ll have a fully Swedish period, since my partner and daughter speak Strindberg’s language fluently. 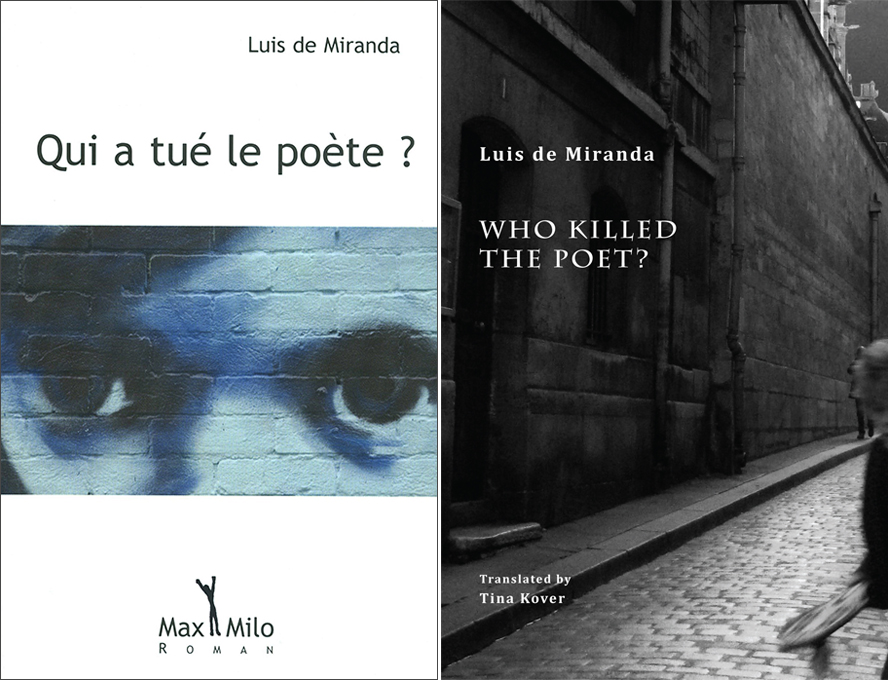 Anna Hernandez: Do you feel that learning multiple languages has improved your writing?

Luis de Miranda: It’s improved my thinking first and foremost because each language is a different web of belief and generates different sorts of psyches and perspectives. As a consequence of the improved plural thinking due to interdiscursivity, my writing has probably also improved. I recently wrote an open letter about the meaning of culture to the new French president, which was published by the mainstream newspaper Libération, and many French readers commented on how well written it was; yet this was my first piece in French since 2014.

It’s like playing several musical instruments: it might be beneficial to put your main instrument aside for a moment and try other techniques so that when you come back to it, you’re actually better as a result of the process of crossfertilization. A language like English itself, as we know, is composed of many French words, which have become more or less domesticated. There’s a lot of metabolization of passages between the spiritual and the mechanical and exchanges between worldviews in the focused use of words.

Anna Hernandez: Who and/or what are some of your biggest sources of inspiration as an author?

Luis de Miranda: This is also an important question, because I believe admiration or awe is a fundamental emotion in a civilized society. The problem with ultracapitalism, for example, is that it tends to divert people’s desire toward forms of envy or idolatry rather than forms of admiration. This in a way is the message of Who Killed the Poet?: let’s not forget about awe, admiration for the sublime, and other forms of respect for unprosaic and nonmaterialistic realities.

As a writer, I’ve admired many other writers and artists, so it changes all the time. A few days ago, I was deeply moved by the correlation between Eric Satie’s music, witty letters, and existence.

I couldn’t write if my writing did not modify my existence while being modified by it.

In the past, my list of admiration has been lengthy: from Fernando Pessoa’s heteronym Alvaro de Campos, clearly an inspiration for the poetic prose of Bardo, to the works of Shakespeare, who as I’ve said, is in fact one of the characters in Who Killed the Poet? But more importantly, perhaps, my main inspiration in life is what I’ve taken to calling the Creal, a concept that is explained in several of my books, for example Is a New Life Possible? (published in English by Deleuze Studies of the University of Edinburgh Press). I couldn’t write if my writing did not modify my existence while being modified by it. For me writing is not an unpassionate production of textual commodities following success recipes. In other words, I write first and foremost as destiny game, both a very serious and child’s game at the same time.

Anna Hernandez: What are your plans for future projects?

Luis de Miranda: Well, the project of translating Qui a tué le poète? into eighty-eight languages is probably going to last for a while. I’ll be very happy if it can be completed before I die . . . Translators of the world, unite—and send me an email! More generally, I feel I’m becoming a global person, or as you would perhaps have it, a world person, aware of the various constellations that compose our plural earth.

To unite these two ideas of universality and pluralism is a general project I identify with. I also intend to organize every year, to start in the spring or summer of 2018, a gathering of translators—and perhaps even readers—of Who Killed the Poet? We might only number five or six people in the first year, but over time an international community will hopefully form around the text and the emotions it generates.

Luis de Miranda grew up in France, and it was there he developed his distinct anticonformist literary style. He has written several essays in French, earning his PhD from the University of Edinburgh. His other notable literary works include Paridaiza, Moment magnétique de l’aimant, The Spray, Joie, and A Vide. He lives in the UK and Sweden with his partner and daughter.

Anna Hernandez has lived in almost every region of the US and studied multiple languages in her BA. She was an Assistant English Teacher while living in Japan for a year, putting her undergrad Japanese classes to good use. Currently, she is a WLT Intern, working on her MA in Library and Information Science from the University of Oklahoma.