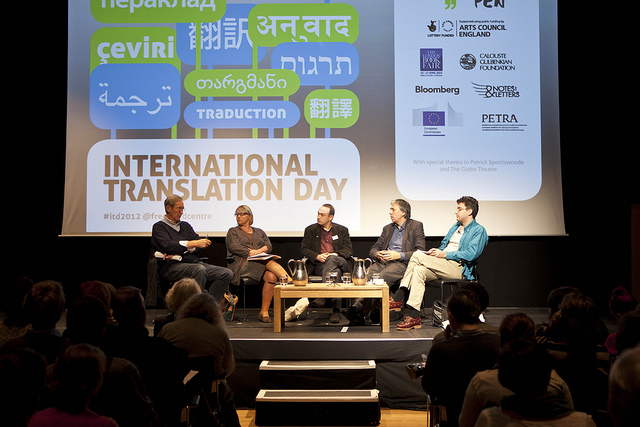 The availability of translated fiction is a common topic of recriminatory debates both within the book trade and amongst communities of readers, but such discussion always develops from the presumption of a parlous state of affairs. Just as every generation finds compelling reasons to conclude that the end of the world as we know it is nigh, so too do doom-mongers regularly surface with dire prognostications about many aspects of literary culture, translated fiction among them. A little perspective is perhaps in order.

As a guest on the State of the Nation panel at the recent third International Translation Day, held in London, I shared a stage with Alexandra Büchler, director of Literature Across Frontiers, a European research organisation supported by the Cultural Programme of the European Union that runs a whole range of projects in support of less widely spoken European languages. She was able to reveal their most recent research, which suggests that the figures in Britain are 2.5% for the whole of the market and 4.5% for fiction, poetry, and drama.

This provides some authority to the figure of 3 percent that has been cited, with uncertain provenance, with regard to both the British and American markets for some time. It’s often contrasted with figures of around 30 percent in the German market and 50 percent in the Italian market, although no one seems to know quite how these statistics were derived either. But as Britain’s shortest-serving Prime Minister, George Canning, once observed: “I can prove anything by statistics except the truth”; this apparently shocking discrepancy needs some context, the most important aspect of which is the English language.

English is the nearest thing the world has to a lingua franca, albeit sometimes in pidgin form. It’s the international language of business and of science; it’s even the language used by every air traffic controller. While it’s of concern how few British and American students learn other languages to any useful level compared to those of Asia and mainland Europe, there’s no arguing that English will enable you to get by in most fields.

It’s also by far the most popular language for writers. It’s an official language in fifty-six countries and, thanks to Britain’s imperial exploits, widely used in the fifty-four nations of the Commonwealth. It’s the only common language across vast swathes of Asia and Africa: India, with its population of 1.2 billion, has a dazzling literary heritage in English alone. No other language can stake such a claim of global literary influence.

We also need to consider that fiction available in translation tends to be at the more literary and less commercial end of the spectrum. Thrillers, romance, historical fiction, and other genres that are already burdened with desperate overpublishing anyway are usually anchored by familiar cultural references and are read principally for escapism and entertainment. Stieg Larsson may well have enthralled readers around the globe, but he remains an exception, and I note that his American publisher is as shy as his British of mentioning the fact that his books are translated on their covers.

We do still peddle the myth that rendering a book into another language robs it of something essential. Authors who either supervise or write their English language versions themselves, such as Carlos Ruiz Zafón or Ngũgĩ wa Thiong’o, would insist that the differences are negligible: a good translator can replicate almost all nuances of idiom and cultural reference.

There is an odd dichotomy in the book world: the catalogues of publishers feature an encouraging range of translated fiction, but what’s stocked in many bookshops seems to belie this. Chains and major online retailers in particular have little interest in coping with the lower margins and distribution complexities of small-scale sales. As an independent bookseller, I feel this offers us a rare gap in the market, and indeed of the many themed promotions we curate at Foyles, it is consistently those featuring translated fiction that draw most sales.

I have no statistics to hand, but I am confident in suggesting that the majority of Japanese fiction sold in Britain is written by Haruki Murakami. Wonderful though his books are, he is of course just one amongst thousands of Japanese authors that might well find a readership in English. I am aware of no other London bookshop than Foyles that chose to mark the release of his recent magnum opus 1Q84 with a promotion of other Japanese writers. This was an opportunity lost, just as every instance of books breaking out of their cultural niche, from Harry Potter to Mo Yan’s Nobel Prize win, offers a chance to broaden readers’ horizons.

The flourishing of small independent presses does indicate that the big publishers are still a little behind the curve. There is much doom-mongering about the future of books, as the market changes rapidly and other media demand our attention, but there are many success stories to be found in the independent sectors of both publishing and retail. Consumers are more curious and thoughtful than capitalism presumes—or perhaps would like—them to be.

Globalisation has exposed us to the cultures of the nations of the world, and as the impact of political, economic, and environmental issues around the world begins to affect us directly, we want to know what makes us different from and what makes us the same as others. Fiction often speaks to us in ways that drier nonfiction accounts cannot, and we are also all united by the universal human compunction for storytelling.

But ultimately the key to boosting interest in translated fiction is in your hands. There is a little corner of north London now obsessed with Finnish writer Arto Paasilinna’s The Year of the Hare: I gave it to my mother a few months ago, and she, smitten by it, shared it with her friends. Like any book that endures, it does so not on the shelves of libraries and shops but in the hearts of readers. As the French might say, Nous sommes tous libraires.