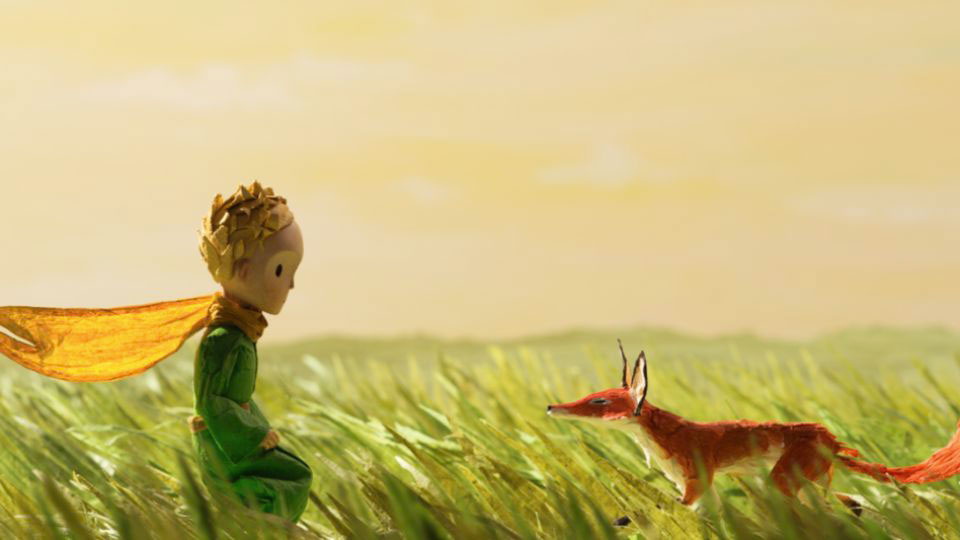 Still from the Netflix adaptation of The Little Prince (2015), directed by Mark Osborn

Translating Antoine de Saint-Exupéry’s The Little Prince is a difficult task, for this beloved novella has been rendered into English seven times since 1943, but Katherine Woods’s first take set a high bar, less for textual accuracy than for creativity, and became the invincible classic translation. When Richard Howard’s 2000 translation was touted as the new standard, the changes he made, despite correctness, stirred up a public (online) outcry and collective nostalgia for the old one.

Howard has displayed his linguistic sensibility and exactitude in his voluminous translations of Roland Barthes. Howard himself is a poet who can tell “no flicker of shame, no flare of shameless desire” in a hustler’s eyes. In a dramatic monologue, he differentiates deer from moose, dik-dik, gazelle, caribou, hartebeest, and gnu. Apparently, our translator of A Lover’s Discourse has a different mission in his rendering of The Little Prince. Not only does he retrieve the simplicity in Saint-Exupéry’s original text, he also steps back from the scene in order to interpret any fragment of lovers’ discourse without verbal intrusion.

Katherine Woods’s poetic rendering of Saint-Exupéry’s text has been lauded for fifty-seven years, but it has also been criticized for its inexactitude. Woods’s lyricism is exemplified in her use of rare words and foreignized syntax: “primeval forests,” “tippler,” “spring of fresh water,” and, of course, “matters of consequence.” However, turning the simple French term buveur (drinker) into “tippler” indicates less the translator’s lyricism than one’s context. As the word “tippler” had been the slang for drinkers in the late nineteenth century, it wouldn’t suddenly seem foreign to readers of the 1940s. On the contrary, her use of “tippler” for “drinker” indicates her attempt, as a dutiful translator, to re-create the effect of the ambiguous time and space where the little prince comes from. Since Saint-Exupéry created a fantasy world that is unbound by time, Woods uses archaic words to obscure the time references that deliver this ambiguity—this is the purpose of translation. Archaic words in her time that are vividly kept in our time are the bonus of good translation.

What Woods least anticipated were the several mistakes in her translation that would soon create ripple effects around the world. In chapter 4, Saint-Exupéry described the little prince as, Il était une fois un petit prince qui habitait une planète à peine plus grande que lui, et qui avait besoin d’un ami. Woods translated this sentence as: “Once upon a time there was a little prince who lived on a planet that was scarcely any bigger than himself, and who had need of a sheep,” mistaking the word ami (friend) for a sheep. Her mishandling of ami went viral instead. At least twenty-two Chinese editions of The Little Prince circulating in Taiwan, Hong Kong, and China were translated, not from Saint-Exupéry’s French text, but from Woods’s English rendering. Chinese readers can tell whether the translator has read the original French text by looking for the sheep. This is the origin of the famous Sheep Test. The sheep test, however, is only one of the games since Woods had been relatively liberal in interpreting the source text. It is to nostalgic readers’ taste to read a translator’s mistakes as a romantic exemplification.

The nomenclature of characters in the book is neither Steinian paradox nor Freudian slip. They are lovers at work.

Saint-Exupéry spells out the myth of love in his book: “Flowers are so contradictory! But I was too young to know how to love her”; “You’re not at all like my rose”; or “I remembered the fox. You risk your tears if you let yourself be tamed.” He might have been pondering over his life writing the story, but he wasn’t attempting to give a lecture. The rose is the rose; the fox is the fox. The nomenclature of characters in the book is neither Steinian paradox nor Freudian slip. They are images, metaphors, and personifications. They are signs memorable for their individual narratives. They are lovers at work. They are the figures that need to be spoken and addressed, and underneath each of these figures lies a sentence, as Roland Barthes exhibits in A Lover’s Discourse. And every sentence is the beginning of a narrative.

On Asteroid B-612, the boy falls in love with the rose after he tends her needs every day, only to find that he is tormented by her vanity. Her “touchy vanity” is exemplified in her desire for attention (tigers), her frailty (coughs), and the fabrication of her past (she is, like the boy, a native of the asteroid). Though the boy loves the rose, he misinterprets her complaints by taking them literally and too seriously. He thinks his obeying her would alleviate her discontent, but the moment he notices her vanity his love for her is altered. Barthes includes the alteration of love in the entry entitled “the tip of the nose.” He thinks the alteration of love happens when the amorous subject sees the image he has created for the loved object collapse and his love for the other suddenly capsizes. The cause of alteration can be as slight as a “faint but certain trace of corruption” on the other’s tip of the nose. On Asteroid B-612, it can be as slight as an insincere cough during a galactic night. The boy leaves his only flower behind for a journey; he concludes this with him being too young to love her.

The fox, on the other hand, is the amorous subject in her relationship with the boy. She chooses to appear in front of the boy but asks him to tame her. Pretending her need to be tamed allows her to hide her feelings from him and preserve her dignity intact. The maneuver itself has a parallel in Barthes’s definition of “dark glasses: cacher/ to hide”: a “deliberative figure.” Barthes describes the amorous subject’s calculating mind functioning as, “I want you to know that I am hiding something from you, that is the active paradox I must resolve: at one and the same time it must be known and not known: I want you to know that I don’t want to show my feelings: that is the message I address to the other.” The fox needs the boy to create ties, because she needs the boy to be the one who actively creates their rituals to affirm her feeling for him. Even so, the fox is too vulnerable to hide her feeling. As she shows him how to tame her, she reveals her submissiveness in waiting for him, claiming, “It would have been better to return at the same time. For instance, if you come at four in the afternoon, I’ll begin to be happy by three.” The fox, ultimately, accomplishes her task of hiding because her heart remains invisible to the boy. After learning how to love from the fox, the boy thinks of the rose and resumes his journey. It is the aviator who can see the fox risking her tears and a broken heart from being tamed.

What Howard does differently from Woods in his translation is his attempt to retrieve Saint-Exupéry’s simplistic aesthetic. He abandons Woods’s peculiar word choice and, instead, replaces them with “jungle,” “drunkard,” “water fountain,” and the controversial “something serious.” Even though Howard has provided a translation closer to the source text, his naturalized language, compared to Woods’s meandering style, is often read as a lesser rendering. However, the debate over foreignization and domestication in translation is not enough to explain the changes Howard has made to his new edition. What Howard has changed, or challenged, is the decades-long discourse built upon the “matters of consequence” of The Little Prince in the United States.

“Matters of consequence” arose in Woods’s edition. It first appears in chapter 7. When the little prince attempts to have a conversation with the aviator who is repairing his plane engine, he abruptly interrupts the child, saying, “Don’t you see—I am very busy with matters of consequence!” In Howard’s version, this very sentence becomes, “I’m busy here with something serious!” Compare the two sentences with Saint-Exupéry’s original line: Je m’occupe, moi, des choses sérieuses! The French choses sérieuses (serious things) is replaced with “matters of consequence” in Woods’s translation, whereas Howard retains its literal meaning in his version. This term appears again in chapter 13 when the little prince visits the businessman who is busy calculating the total assets on his planet. Woods includes the term in the businessman’s impatient answer: “I am concerned with matters of consequence. I don't amuse myself with balderdash,” heavily revising Saint-Exupéry’s sentence: Je suis sérieux, moi, je ne m'amuse pas à des balivernes! Contrariwise, Howard pays more attention to the word balivernes (twaddle, nonsense) and gracefully renders the sentence as, “I’m a serious man. I can’t be bothered with trifles!” Not once does Howard obliquely allude to the ready-made “matters of consequence,” the philosophical compound that has won Woods’s work the label of classic.

If Woods’s translation is a moralistic interpretation of The Little Prince, Howard’s is an ethical act.

That is, Woods purposefully changed Saint-Exupéry’s “serious things” into “matters of consequence” in her translation. This deliberate replacement initiated the discourse of matters of consequence and changed the critical reception of The Little Prince, which is often read beyond the scope of children’s literature for its tellingly philosophical musings. Instead of arguing whether Howard has removed Woods’s poetic rendering, a more important question is to ask the reason why Woods discarded a literal translation and opted for the abstract but serious “matters of consequence.”

Replacing “serious things” with “matters of consequence” in 1943 was a serious matter, since the change indicated less the translator’s aesthetic decision than her moral judgment. Woods was Saint-Exupéry’s contemporary; her finished translation certainly would be delivered to the author then and there. Nonetheless, the ongoing war made publication of The Little Prince urgent for this fairytale-like novella to fulfill its therapeutic mission, not only to console children, but also to heal adults. Seriousness is a relative concept, and the meaning should arise from its comparison with lightness. Matters of consequence, on the contrary, indicate responsibilities, referring to the cause and effect of one’s behavior. Woods’s decision indicates her moralistic interpretation of the text, her response to the time, and, therefore, “matters of consequence” is her peculiar euphemism for war.

Howard, however, was no stranger to Saint-Exupéry’s time; he was an adolescent when Woods’s translation first came out in the United States. Unlike Woods, Howard chose to retrieve the author’s simplistic language and nonjudgmental tone without imposing his interpretation onto this book for all ages. If Woods’s translation is a moralistic interpretation of The Little Prince, Howard’s is an ethical act. Retreating in his role to that of an invisible translator, Howard demonstrates trust in his readers, adults and children alike, who are to take something serious from the book on their own. After all, children know what is important in their life, whereas adults, concerned with matters of consequence, are serious and very strange.

Yu-Yun Hsieh is a writer, critic, and translator, currently a PhD candidate in comparative literature at the Graduate Center, CUNY. She is an award-winning novelist from Taiwan and a former fiction fellow of the Writers’ Institute in NYC. Her Chinese translation of Thomas Pynchon’s The Crying of Lot 49 was published in 2014.