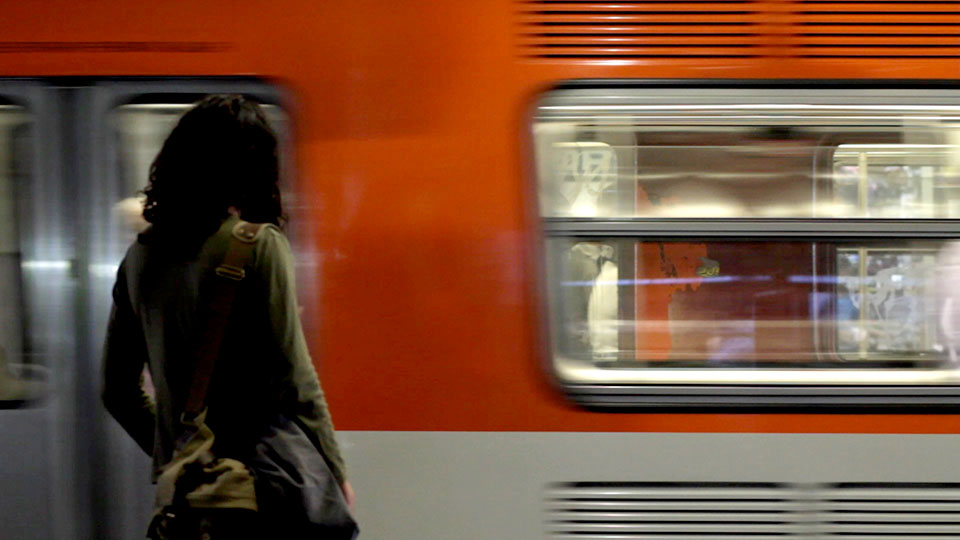 Why force out dreams and nightmares
if everything here convulses until it tames amazement?
This, only in part, is what Breton realized with his naïve eyes
as they drifted across the surface of these lands.

In those days the subsoil was a depth conquered
by water, mud, and ruins more ancient
than the gods of Lautréamont.

Since half a century ago, without resorting to imagination,
the inhabitants of this valley have traveled
underneath the streets,
excavating, day by day, its foundations.

A bustling, flowery market
(with special offers and suffering)
travels along tunnels and train cars
pressing the existence of those who rush by,
of those who seek shortcuts underneath everything.

A blind man, maybe not watching, plays a melody
on an electric piano with his right hand
as he keeps the beat sinister with the other,
between trip-ups, with a cup that is maraca and collection box;
quality chocolates and peanuts are advertised
for ten pesos (“they cost what they’re worth”);
women in face masks look sideways at couples that embrace
and kiss like moles in heat.

Every kind of advertiser enters and exits the train cars,
station to station: people selling self-help books
and biographies of Che; evangelical preachers;
vendors of chewing gum and lozenges
for the good of throats and mouths;
dazed deaf-mutes; paraplegics in casts;
DJs with backpacks and singers with electric-acoustic guitars
who offer ballads and rock in English and Spanish.

All struggle, body against body,
like the wounded of extinct battles.

The father of surrealism noted none of this in his log,
not while visiting these stops
nor while marinating his subconscious in the waters of the Seine.

The process of translating Arturo Gutiérrez Plaza’s Cuidados intensivos (Intensive care) into English has been somewhat idiosyncratic. I knew Arturo first not as a poet but as a professor when I took one of his classes on Latin American literature at the University of Oklahoma, and we became friends over conversations about Roberto Bolaño and our status as tocayos (“name-sharers”), since I went by “Arturo” in class. As an undergraduate, I told him about my budding interest in translation. Not long after, we met for coffee and he handed me a copy of Cuidados intensivos, suggesting with a wry smile that he’d like to see it in English someday. I got to work, and the poem featured here is one of my favorites from the full translated collection.

Arturo wrote “Universidad-Indios Verdes,” along with several other poems from Cuidados intensivos, during a long stay in Mexico City. Many texts in Cuidados intensivos offer poetic renderings of urban Mexican panoramas, often with a sense of wonder at the dimensions and complexity of the society centered around the former Federal District. When I began translating Cuidados intensivos, I had no lived experience of Mexico City, or of Mexico in general—I had to use my imagination (and what I learned about Mexico in college classes) to transfer Arturo’s images of the deep, sprawling, unfathomably large urban realm from one language to another. Then, in January of 2016, I moved to Mexico and lived there for five months, helping to found a new WLT initiative called Latin American Literature Today. I was lucky enough to see Mexico City from the top of the Torre Latinoamericana to the depths of the metro, and my tangible experience of the city had a great impact on how I reread and rewrote “Universidad-Indios Verdes.”

Gabriel García Márquez famously suggested, “In Mexico, surrealism runs through the streets. Surrealism comes from the reality of Latin America.”1 This opinion was certainly shared by André Breton, Arturo’s muse in the poem, whose writings from his own stay in Mexico in 1938—particularly his essay “Memory of Mexico”—depict the country as surrealism’s natural, inadvertent home. Such opinions from writers and academics have a great deal to do with the almost universal association of “magical realism” with Latin America, and with Mexico in particular. The predilection to imply that the writings of García Márquez and other members of the so-called Boom employ magical realism because it represents the reality of their homelands has stirred up controversy since the 1990s. Alberto Fuguet’s aptly titled short-story collection McOndo (1996) gave a name to the literary backlash against essentializing, exoticizing perceptions of Latin America as inherently surreal. So, I was treading shaky ground as I began my translation of “Universidad-Indios Verdes” without personal experience of Mexico—as a naïve gringo, I had to treat the theme of “inherent” Mexican surrealism as noted by Breton while not falling into the trap of essentialization myself.

I was treading shaky ground as I began my translation without personal experience of Mexico—I had to treat the theme of “inherent” Mexican surrealism as noted by Breton while not falling into the trap of essentialization myself.

My first crack at translating the poem, months before I set out for Mexico, already brought up a couple of quirky obstacles. My favorite came in Arturo’s description of a blind man playing an electric piano on the metro. The Spanish reads:

The trick here came from Arturo’s use of the adverb siniestramente to create a double meaning. A literal translation of the word to English would give us “sinisterly,” and he certainly means to suggest that there is an element of menace in the way the blind man plays.

However, in Spanish, the connection between the term siniestro (“sinister”) and the idea of the left side—or the left hand—is much stronger than the vestigial connection between “sinister” and the left side in English. So, using a single adverb, Arturo tells us that the pianist is both playing in a way that inspires suspicion and using his left hand to shake his dual-purpose cup. My rendering of this section in English (see below) loses the adverb, directly stating which hand is doing what and adding “sinister” back in as an adjective in an effort to preserve both the image itself and its atmospheric descriptor. These sorts of translation puzzles are always good fun, but they were the least of my worries next to the overarching task of re-creating “Universidad-Indios Verdes” in English, respecting its connection to Breton, and avoiding an exoticized representation of Mexico.

Try as I might, I couldn’t get satisfaction when it came to Arturo’s Mexican poems as I worked on them for several months in Norman, Oklahoma. Besides “Universidad-Indios Verdes,” I was up against a vivid poem describing “the sun rising over Paseo de La Reforma,” another on “the secret vices of Tenochtitlán,” and a third—the most resistant to translation in the entire collection—constructed entirely out of invented verbs based on the Mexican culinary lexicon. I had completed drafts of all of these poems before I arrived in Mexico, but they struck me as one-dimensional, generalizing, and dead. Arriving for myself in Mexico, and then in Mexico City, gave me a unique opportunity as a translator to give them some new life.

I had completed drafts of all of these poems before I arrived in Mexico, but they struck me as one-dimensional, generalizing, and dead. Arriving for myself in Mexico, and then in Mexico City, gave me a unique opportunity as a translator to give them some new life.

On my first journey into Mexico City, I took the metro to get from the bookstore of the Fondo de Cultura Económica to the TAPO bus station, where I would catch my ride back to my home base in Puebla. I had experienced a couple of metros before, but this time I descended with particular attention, hoping to spot some evidence of the true nature of the subterranean world that so fascinated Arturo. Sure enough, I swiftly found myself in a Breton-esque predicament, pondering what seemed to my standards to be textbook surrealism all around me. Arturo’s cast of characters was all present: the masked women, the affectionate couples, the underground DJs, the shouting salespeople, and even the blind men shaking their coins to an improvised beat in tin cans. I saw why this setting had inspired Arturo to write his poem, and I realized firsthand that he was correct: Breton, or any foreign observer with a keen eye for what Western intellectuals call “the surreal,” would be quick to identify such an environment as a naturally occurring hotbed of surrealism. I was tempted to do the same.

But, as I clumsily exited my final train (which very nearly departed with my foot still clamped in its door), I considered that the residents of Mexico City who ride the metro every day don’t have the luxury of analyzing the apparent surreality of their surroundings. The people who surrounded Arturo and myself on our metro rides, telling stories for donations, selling CDs, or absentmindedly playing on their cellphones, were all living their real lives in their real-life environments, and for an outside observer to classify those lives and environments as inherently “surreal” was unfair and inaccurate. My metro ride reinforced my conviction that the writers of the so-called “McOndo” movement have a point when they speak against the essentialization of Latin America as a magical-realist continent: the ordinary people riding the metro home from work that afternoon were not characters in a magical-realist novel, nor were they objects in a piece of French surrealist art. They were human beings living nonfictional lives. 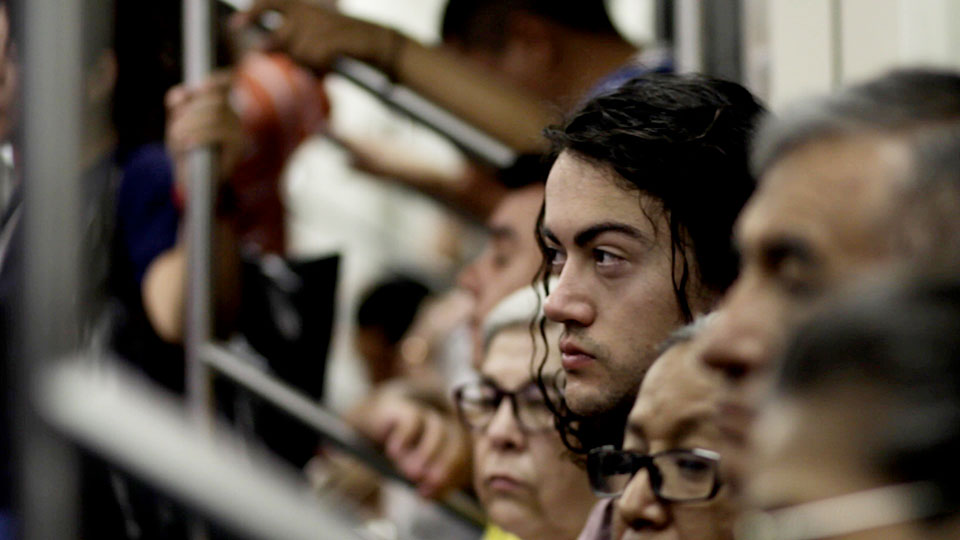 I kept this perspective in mind as I revised my translation of “Universidad-Indios Verdes” and Arturo’s other Mexican poems. I hope I’ve succeeded at writing renderings of the texts that re-create Arturo’s wonder and admiration before the spectacle of Mexico while respecting the real-world identities of the poems’ characters. I’m incredibly lucky as a translator to have been able to experience the setting of my author’s work firsthand, and I think that experience was instrumental in preparing translations that I can be proud of. “Universidad-Indios Verdes” is one of my favorite pieces by my tocayo, both for its beautiful verse and for its evocation of a place that deserves to be read about. I hope my translation does it justice, and I hope seeing it here will draw more readers toward Arturo’s brilliant body of work.