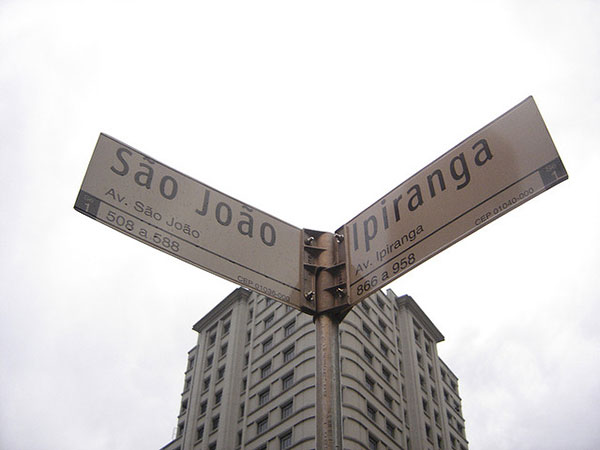 The corner of Ipiranga at Avenue São João. Photo by Ricardo Romanoff

With all eyes on the World Cup in Brazil and one semifinal due to be played in São Paulo’s Arena Corinthians on July 9, it seemed like a good moment to introduce a translation of a famous song about the city known affectionately as “Sampa.”

There’s something that riles up my heart every time even now
Whenever I cross Ipiranga at Avenue São João
But when I first came here, São Paulo, I didn’t understand
The concrete poetry of all the corners and streets here
The subtle foxiness of all the girls that I would meet here

What did I know then about the songs you inspire—
Psychedelic rock, political fire
There’s something that riles up my heart every time even now
Whenever I cross Ipiranga at Avenue São João

From your poor who scratch out a life in a shanty in the slums
From the wealth that you use to crush beauty under your thumb
From even the smoke that spews out to erase all the stars
I see the poets rise from your fields, your open spaces
Your forges, your forests, and your gods of rainy places

Pan-America, utopia of Africa,
A subway that’s an underground railroad
This outsider now can love you like I just belong
I strolled through your drizzly streets and I wrote you this song

“Sampa” is one of most beloved ballads of singer/songwriter Caetano Veloso, a gorgeous love poem to São Paulo, South America’s largest city. The word “Sampa” is the nickname of São Paulo, the same way that “Vegas” is slang for Las Vegas. In Brazil, this song is so popular that Veloso can start singing and then turn the microphone to the audience, and they’ll finish the song for him.

“Sampa” is drizzled with allusions to Brazilian history and culture, which is one of the challenges for translators. The references would mostly be well known to Caetano Veloso’s listeners, but they require equivalents or explanations for English speakers. Some of the allusions have cousins in the anglophone world, and where that’s possible, we’ve tried to find those. Other references, though, need to remain as they are or too much leaks out through the translation colander. We’re not used to pop songs with so many layers, but this is no ordinary pop song, and Veloso is no ordinary songwriter. So here goes.

The first reference in the song is to a major traffic intersection in downtown São Paulo, the corner of Avenida Ipiranga and Avenida São João. My cotranslator, Joana Darezzo, a native of São Paulo and a wonderful fiction writer, explains this street crossing: “Not very remarkable, really, except that it’s been immortalized by the song, and now every time I drive through that intersection I can’t help singing the lyrics. I think most people do that.” Ipiranga is a word that comes from Tupi, a South American Indian language, and means “Red River.” São João, on the other hand, means “Saint John” in Portuguese, so the crossing embodies the multicultural mix in the city and in Brazil. More on that in a moment.

Next, the songwriter talks about when he first came to São Paulo. Caetano Veloso is originally from a town in the province of Bahia in the Northeast, the heart of Afro-Brazilian culture. The songwriter literally says, “I understood nothing / Of the harsh concrete poetry of your corners.” We kept “concrete poetry,” since that phrase exists in English, too. For those who may not know, concrete poetry is a form of modern writing where the shapes of letters and words become part of the art. But the song uses it as a complicated play on words. São Paulo is a contemporary city with lots of concrete, so the songwriter is saying that even modern design can have poetry. But in Brazil, the poets who actually founded the poesia concreta movement were based in São Paulo.

We agonized over the next line, “Da deselegância discreta de tuas meninas,” which means roughly, “the discreet lack of elegance of your girls.” I hope our solution, “the subtle foxiness of all the girls that I would meet there” conveys that the songwriter finds the women of São Paulo sexy in an understated way.

Next comes a reference that we felt was too difficult to keep as is, a line about the Brazilian singer Rita Lee. Remember the songwriter is still talking about when he initially arrived in São Paulo, alienated and without connections to the city. Literally, he says something like: “I didn’t have Rita Lee / your most complete translation.” Rita Lee, born in São Paulo in 1947 and still kicking, was for Caetano Veloso’s generation something like what Jimi Hendrix or the Beatles were for mine. She exploded all the conventions of popular music and introduced psychedelic rock to Brazil with her band, Os Mutantes (The Mutants). Not only that, Lee’s group leaped into the music scene during the period of the dictatorship in Brazil (1964–85), and her band’s whole attitude spoke of resistance to the military rulers. Veloso was also an opponent of that regime, which arrested him and finally sent him into exile. How to refer to Rita Lee, a household name in Brazil, but almost totally unknown in the English-speaking world? So we translated those lines as “What did I know then of the songs you inspire / Psychedelic rock, political fire.”

We felt we could make that big a change because we were translating a song. Creating a version of a song in another language is not like translating prose, or even like translating poetry. The end product is meant to be sung in the target language. Just one example, also from Brazil: Antônio Carlos Jobim’s classic song “Corcovado” mentions even in the title the mountain above Rio de Janeiro with the statue of Christ the Redeemer. But in English, what did this title become? “Quiet Nights of Quiet Stars.” Poetic licenses have several additional clauses when it comes to translating songs.

The rest of the lyric of “Sampa” is more self-explanatory, and we translated it much more literally—until you come to the last verse. Word-for-word this begins:

Here again we were stuck. The references were obscure for most English speakers. Quilombo dos Palmares was the largest colony of runaway Africans in the seventeenth century during the period of slavery in Brazil. Zumbi was their leader. The colony resisted attempts by the Europeans to capture them until 1694, when a massive raid by the Portuguese army retook the runaways and killed Zumbi. Veloso is comparing the freedom of urban life to this colony of freemen, so we used what we hoped was a close equivalent, the Underground Railroad.

The very last lines of the song mention a band called Novos Baianos, which means “the new guys from Bahia.” We tried to include this in the idea that the singer is an outsider in São Paulo. We focused more on the image in these lines of the drizzly streets—São Paulo is famous for its misty rain.

Here’s how my collaborator, Joana Darezzo, sums up “Sampa”: “This song deals with a very heated subject in Brazil: the immigration of people from the northeastern states to the southern and southeastern states of Brazil, particularly to São Paulo. They come here to escape severe drought and poverty and are met with prejudice and discrimination. People make fun of their accents and the way they look, blame them for all the problems in our city—the usual. Immigrants mostly work for minimal wages and live in substandard homes. After my stay in the US, where I got to be a minority for the first time—a white, English-speaking minority, but one nonetheless—the subjects of discrimination and xenophobia became particularly relevant to me. I could clearly see how arbitrary discrimination is. I didn’t change, yet in Brazil I’m part of the dominant class, and in America I’m not. Many people who view themselves as white in Brazil would be considered ‘people of color’ in the States. It makes you think.”

I should also mention the syncopations and melodies in this song. I fell in love with “Sampa” before I understood what it was about because of the musicality of the words. I asked Joana to translate it with me because I wanted to know what the lyrics said. It turned out that, melodically and rhythmically, the song is extremely complex. There are three different cadences and tunes that are dramatically different, and they alternate in an unpredictable manner. Miracle of the Internet—we found a karaoke version online that helped us work out some of the more difficult scansion.

“Sampa” is a lovely ballad, nostalgic, but with biting political content. I hope someone is able to sing our translated lyric and give English speakers a sense of the richness of this song.

Zack Rogow is the author, editor, or translator of twenty books or plays. His translations include Earthlight, by André Breton, which received the PEN/Book-of-the-Month Club Translation Award.

Joana Darezzo was born and raised in São Paulo, Brazil. After receiving a BA in languages and literature at Pontifical Catholic University–São Paulo, she moved to San Francisco, California, where she received an MFA in creative writing at California College of the Arts. She is currently back in her hometown, teaching English as a foreign language to adults and teenagers.