Fuchsia Branch in the Wind

I block the sea’s wind from the branch.
My black umbrella shelters it from rain.
Its blossom’s flames put me in a trance.
I fear a reckless touch might bring them pain.

The sea howls as with a coming hurricane.
Clouds grow leaden, dim. The sky leers –
and the fragile fuchsia flutters in vain.
A black flag is raised upon the pier.

The branch in my hand lives in color.
Its delicate petals lean from lightning,
hide from thunder – the passion, the horror.
September so rarely storms. What frightens

me is the flash that flares the flower distinct
in the window of the night – for just one blink
of an eye – my only September bloom . . .
The sea storms so much it shakes the room.

Wistful and empty. Skies squirt rain.
Pipes rust along a stone wall . . .
Does my saint still stand
in the bell-tower niche? Ave Maria.

I love that small, side-street Madonna –
her paint peeling, her feet broken . . .
I accept her smile like a loaf of bread
and divide it up for a thousand lips.

Her face is familiar, her face quotidian –
one is driven into the street everyday . . .
A shadow quivers on bell-tower walls:
the niche crumbles, falls . . . Ave Maria.

Translations from the Lithuanian
By Rimas Uzgiris 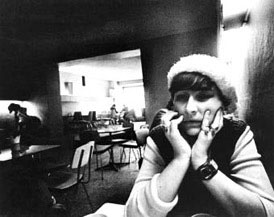 These two poems, “Fuchsia Branch in the Wind” (Fuksijos šakelė vėjy) and “Side-Street Madonna” (Skersgatvio Madona), taken from Judita Vaičiūnaitė’s posthumous Kristalas: Poezijos Rinktinė (2010; Crystal: Selected Poems), represent the neo-romantic strain in her oeuvre. “Fuchsia Branch in the Wind,” in particular, owes much to her predecessor Salomėja Neris. Romanticism came late to Lithuanian poetry, the language itself having been banned by the Russian empire after the 1863 uprising. Mairionis, starting in 1895, was the great romantic of Lithuanian literature, articulating Lithuanian identity in relation to nature, Catholicism, and ancient history, with a verse of scintillating musicality. Salomėja Neris, the first prominent female poet in Lithuanian, continued this tradition during the mid-twentieth century (with a late twist: she became a diehard communist, even writing an odious encomium to Stalin). A romantic musicality became a hallmark of Lithuanian poetry throughout the twentieth century, with themes often drawn from nature and rural life. Vaičiūnaitė’s work was both a part of this tradition and made a break from it. She developed a poetics of the city, rooting Lithuanian identity there, not in rural existence, and explored issues faced by women, both as a single woman in the modern city and through historical and mythological monologues (à la Cavafy and Browning).

These poems, taken as a pair, represent both the neo-romantic musicality and the beginning of its transfer to an urban environment. “Fuchsia Branch in the Wind,” although written late in her career, is a prime example of the earlier trend. It is all nature and song. The tender branch must be protected from the threatening elements (with various symbolic interpretations left open). It is written in rhyme and meter, loosely iambic pentameter with quatrains in an alternating rhyme scheme (abab cdcd, etc). Variations to the rhyme and meter, and the presence of slant rhymes, however, give the translator some leeway in conveying that musicality. In the first stanza, her second and fourth lines do not rhyme at all, while in the third stanza they make a slant rhyme. This is not unusual for her work; in fact, she often writes in free verse, and her formal poems can play fast and loose with their form. She also makes use of assonance and alliteration, here and in most of her work, to make her lyrics sing.

A romantic musicality became a hallmark of Lithuanian poetry throughout the twentieth century, with themes often drawn from nature and rural life. Vaičiūnaitė’s work was both a part of this tradition and made a break from it.

Therefore, I decided the translation had to rhyme, that it had to be musical, but I freed myself from strict formal obedience. I sought a musical translation with minimal departure from her original. What I ended up with, on the other hand, was a poem that was a bit more my own than I expected. When Vaičiūnaitė writes “tamsėja debesys, dangus prakiūra” (clouds darken, the sky cracks open), I came up with “Clouds grow leaden, dim. The sky leers –” The third stanza’s first three lines, in a literal translation, would read “And the shrub in my hands is living purple, / fragile blossoms touchingly lean from lightning, and the thunder is full of passion and horror –” (Although, let’s not be fooled by supposedly “literal” translations: I could just as easily have written “sadly” for “touchingly” or “causes shivers” for “horror.”)

Have I changed too much? Who can say? When I first began translating, I came across Tomas Venclova’s statement that he considers his translations to be equivalent to his own poems.[1] So this is my version of Vaičiūnaitė’s poem. (Though I do not think I have departed from the original as much as Borges has done in his translation work, or as Celan has done in his.[2]) Perhaps, when my translation of the entire book is published in English (in early 2017 by PicaPica Press), I will have a different version. But it might not be a better one.

While “Fuchsia Branch in the Wind” reveals a certain indebtedness to Salomėja Neris’s neo-romantic musicality, “Side-Street Madonna” takes us into unique Vaičiūnaitė territory: the city, specifically, the old town of Vilnius and its winding streets. On the issue of streets, the title presents a translation problem from the get-go. “Skersgatvis” can be translated as “side street,” “alley,” or “backstreet,” but none of these are quite right for a depiction of Vilnius’s old-town streets. Yes, they are often narrow and winding, but even these can see hordes of pedestrians and lines of cars rushing through. In other words, the so-called backstreets seem more like thoroughfares at times. However, “street” is too general, and “old town street” too clunky and geographic. In this case, I chose “side street” both for the sound and the meaning.

Vaičiūnaitė’s poem is not strictly formal, but it is musical. Thematically, the neglected nature of the statuette is crucial for the sense of the poem. The only daring change I made in my translation was due to an initial error. In the fifth line, I initially took “vienaplaukę” to be a combination of “vienas” (one) and “plaukti” (to swim), and came up with “lone swimmer.” When a more thorough dictionary check (I had to drop the “a” in the middle and search for “vienplaukis”) revealed “bareheaded” as the meaning, I tried out the correction: “bare-headed, / wet, shivering, and silent on the street . . .” And look at all those adjectives in a row! Well, the stylistic rules of Lithuanian prose and poetry allow for far greater use of adjectives than in English. They can be piled on to a degree we (American?) English writers find shocking. So, what to do? Well, I followed Venclova’s advice again (he was a friend of Vaičiūnaitė’s after all) and made the poem my own, leaving in my mistake: the noun, I reasoned, would break up the adjectival flow. And said mistake was, I thought, quite consistent with the mood and meaning of the poem. Mostly, though, I had grown to like its metaphoric expressiveness . . .

O translator! O traitor! But wait, Judita, is that an impish smile I see, flitting across your revenant face? Whether I have failed you or not, I thank you for your poems. Your loving (and faithful?) servant, Rimas.

Editorial note: Ellen Hinsey’s interview with Tomas Venclova (“Literature and the Hippocratic Oath”) appeared in the November 2014 issue of WLT, “After the Wall Fell: Dispatches from Central Europe (1989–2014).”

Rimas Uzgiris is a poet, translator, editor, and critic. His work has appeared in various journals, and he edited and translated an anthology of new Lithuanian poets, How the Earth Carries Us (2015). He holds a PhD in philosophy and an MFA in creative writing. Recipient of a Fulbright Scholar Grant and a National Endowment for the Arts Literature Translation Fellowship, he teaches literature, translation, and creative writing at Vilnius University.