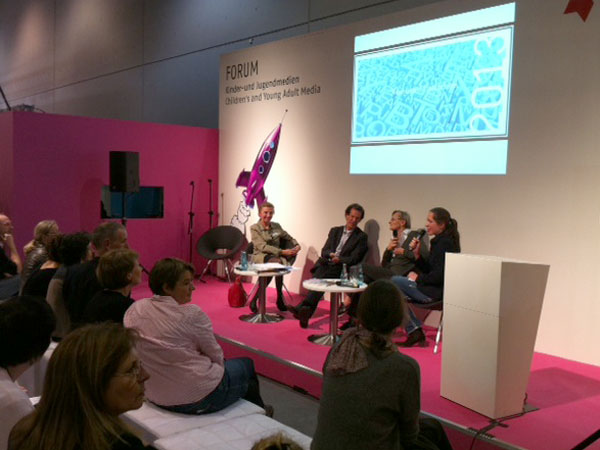 Day two in Frankfurt and the fair is buzzing with activity. For those of us focusing on children’s literature, Hall 3 is the place to be. Children’s and young adult literature are the main focuses, and publishers of children’s literature from all over the world gather here each year. This year the fair has also produced a catalogue highlighting children’s and young adult media at the fair. As the second day drew to a close, Birgit Fricke of the Frankfurt Book Fair gave us her impressions of the events so far:

After the first two days of the fair, everyone is very happy and the atmosphere is good. With books for children and young adults making the transition to new media and markets, the publishers of children’s literature are also finding new ways of promoting and marketing. Everyone is very enthusiastic about what the future holds for the children’s book.

That same day, October 11, The Astrid Lindgren Memorial Award, together with the Frankfurt Book Fair, hosted a program announcing the list of nominated candidates for the 2013 award. The program started at 4 pm with a welcome address by Gabi Rauch-Kneer, vice president of the Frankfurt Book Fair, followed by a presentation of the work of 2012 ALMA recipient Guus Kuijer.

Larry Lempert, Chairman of the award jury, then announced that there are 207 candidates from 67 countries nominated for the 2013 award, which is more than ever before. The number of nominating bodies participating in the nomination process has also increased since last year. The program concluded with a conversation between Larry Lempert and Karin Nyman, translator and daughter of Astrid Lindgren.