Collecting Stories and Translating the World for Children: A Conversation with Elizabeth Laird 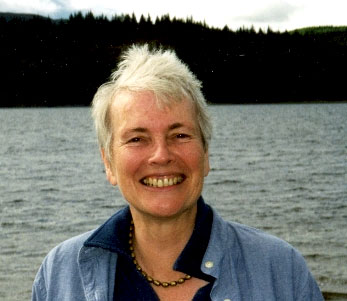 Elizabeth Laird (elizabethlaird.co.uk) is the author of many books for children, young adults, and those beginning to read in English. Born in New Zealand, Laird has lived in England, Malaysia, Ethiopia, Scotland, India, Iraq, Lebanon, and Austria, and run writing workshops in Kazakhstan and Palestine. Here she and WLT's managing editor continue a conversation they began during the Edinburgh International Book Festival in August.

Michelle Johnson: What caused you to leave the UK and travel throughout Ethiopia collecting folktales for children?

Elizabeth Laird: I returned to Ethiopia after a long absence of thirty years, and while walking in the hills above Addis Ababa, I bent to watch some ants who had made a path through the grass. An old farmer approached me and told me a beautiful story about an ant. It made me realize that there must be many such stories in Ethiopia, and the thought set me on fire.

I approached the British Council and presented the idea of a story-collecting project to them. I offered to collect stories and use them to make readers in simplified English so that Ethiopian schoolchildren could learn and enjoy their own cultural heritage while studying English. I was thrilled and astonished when Michael Sargent, the imaginative director of the British Council in Addis Ababa, and outward-looking officials at the Ethiopian Ministry of Education, set up a much bigger project than I had had in mind, and sent me off on a series of amazing journeys through the length and breadth of Ethiopia, meeting remarkable people and listening to wonderful stories everywhere.

MJ: Reading about the project online, I see multiple instances of translation in a single book. Could you talk about the translations a single story might undergo?

EL: Ethiopia is a country of great linguistic complexity. There are at least seventy-five languages, many spoken by small minorities. Many Ethiopians speak several languages, and educated people speak Amharic (the national language) as well as some English. Typically, a story might be told to me in one language, translated into Amharic by a local translator, and then from Amharic into English by the British Council translator who travelled with me. So, in answer to your next question, Amharic was indeed a bridge.

MJ: Of all the languages spoken in Ethiopia, how many of these did translators translate from for this project?

EL: I don’t remember exactly how many languages we worked from. Of the major ones, there was Oromiffaa, Tigrinya, Afar, and Somali, all of which have quite large numbers of speakers, but it was exciting, too, to record stories in Nuer, Anuak, Haderinya, and the even more unusual Gumuz, Shinasha, Berta, Opo, and Majangir. Some of these languages have not yet been written down, and some are available to listen to on the website ethiopianfolktales.com.

MJ: What were a couple of the thornier translation issues you confronted on this project?

EL: On one occasion a translator with rather poor English was telling me a story featuring an ape. He pronounced the word “appa,” which I interpreted as “apple.” As you can imagine, the story didn’t make much sense. We both laughed when we realized the misunderstanding.

A different problem was an enthusiastic translator with very fluent English, who was himself a gifted storyteller. He would enjoy telling the story in his own way without sticking closely to the original version, losing in the process some of the storyteller’s “voice.”

MJ: Was writing the tales in simple English, for those learning English, also an act of translation?

EL: Yes, in a sense it was. I had to remember that I was writing for children, and some of the rougher edges needed smoothing. I would sometimes have to listen to the stories again and again to understand the plot, as the storyteller might have remembered incidents in the wrong order, or confused two characters, or stuck a bit on at the end to explain the beginning. There were also some things which seemed quite obvious to the storyteller, but needed a little glossing for the reader.

MJ: You’ve also translated The Shahnameh, a tenth-century epic poem by Ferdowsi. How did you approach this translation?

EL: Ferdowsi’s Shahnameh, this wonderful epic poem which has inspired artists and storytellers for centuries throughout Central Asia, has been rather neglected in the West. I can’t claim to have translated it from the original, as I don’t speak or read Farsi, the language in which it was written one thousand years ago. I just wanted to bring it to life for young British and American readers.

There was a sense, however, in which I did translate it. My obvious source was the only complete translation in English by the brothers Arthur and Edmond Warner published in 1832. They wrote in verse in an antiquated and flowery style, using “thee” and “thou” and “quoth he.” A more recent version by Dick Davis, though very clear and scholarly, abbreviated the original and lost some of the poetry as a result. Not wishing to be contaminated by the pomposities of the older English version or the matter-of-factness of the new one, I decided in the end to work from the classic nineteenth-century French translation by Jules Mohl. In this way, I could get a feeling for the complete text, find my own words, and write my own version.

Shirin Adl, the Iranian artist who illustrated the book, did, in a sense, go through the same process. She is steeped in the traditions of Persian art, but she brought her own humor and wit to the project and created pictures that jump off the page and are accessible to young readers.

MJ: You’ve just returned from the IBBY (The International Board on Books for Young People) international congress in London, where you were a featured speaker. Online, I noticed the subtitle for the conference is “Crossing Boundaries: Translation and Migrations.” Can you share one or two of the translation issues most on the minds of IBBY congress participants?

EL: IBBY is a great organization that brings together writers, artists, and all those who are interested in children’s books from all around the world. It was thrilling for me at this Congress to meet delegates from Afghanistan, Indonesia, Japan, Uganda, South Africa, India, the United States, and Iran. (The Japanese spoke movingly about how, after the devastating earthquake and tsunami in 2011, IBBY members all over the world responded to their appeal and sent books to children in the affected area.)

It’s a tall order to summarize the congress, which was a feast of ideas and sessions with multilingual and multinational speakers. Everyone brought to it their own concerns and ideas. For me the most memorable moments included hearing the inspired Australian artist Shaun Tan, whose wordless picture books do indeed cross boundaries through art, the Mongolian storyteller Dashdondog Jamba, who told his story in Mongolian (and everyone understood it), Sonia Nimr, the hugely talented Palestinian storyteller making the audience of five hundred rock with laughter, and the Welsh storyteller Michael Harvey, who switched between Welsh and English with no discernable loss of comprehension on the part of his audience. Out of the tempting number of parallel sessions, I attended one on a Maori writer and artist in New Zealand and another about a literacy project in Uganda. I only wish I had been able to attend them all. The next congress will be in Mexico City in 2014.