From Mark Antony to Bill Clinton 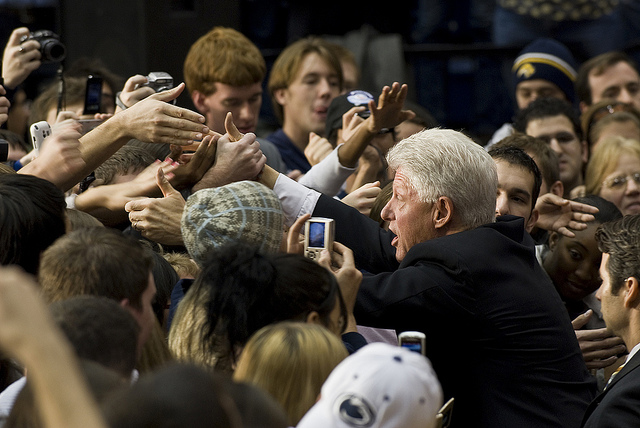 British journalist Sam Leith is the author of one novel and three nonfiction books, most recently "You Talkin’ to Me?": Rhetoric from Aristotle to Obama. Here he talks about real and fictional rhetoricians, including Bill Clinton, Mark Antony, Humbert Humbert, and Satan.

Michelle Johnson: Did you hear Bill Clinton’s speech at the DNC? How effectively did he use the tools of persuasion you write about in your book?

Sam Leith: I did. He was extremely effective—harnessing all the kudos that he enjoys as an elder statesman of his party. His use of bare facts–and let it be noticed that only such a fluent and charismatic orator could make such a dry speech without losing his audience–was brilliant. It gave the impression of a cold and forensic scorn for his opponents in the GOP, and an above-the-fray quality that adds up to a powerful ethos appeal.

MJ: Weeks later, on The Daily Show, Jon Stewart and Bill Clinton discussed the simplicity of Clinton’s delivery, focusing on his use of facts and distinguishing his speech from “high rhetoric.” Is this simplicity a rhetorical style, and is it simple?

SL: Whenever you hear someone—especially a politician—dismissing an opponent’s “rhetoric,” you need to bear in mind that that is absolutely a rhetorical strategy. It’s as old as the hills. When Mark Antony in Julius Caesar says, “I am no orator, as Brutus is / But as you know me all a plain, blunt man,” that’s a pack of lies. He’s a much better orator than Brutus. The mistrust of rhetoric goes back to Plato (and before) and there’s nothing a rhetorician likes better than to capitalize on it. Rhetoric is what the other guy does; whereas you speak from the heart. Simplicity is a rhetorical style—the ancients distinguished the high style, medium style, and plain style—and one not less artful for being less ostentatious.

MJ: How would you assess Bill Clinton as a rhetorician?

SL: Clinton, I’d say, is deeply impressive as a rhetorician. He’s not infallible—the overlong, clunky speech he gave endorsing Mike Dukakis at the 1988 DNC was so bad that when he went on the Johnny Carson show afterward Carson asked him how he was and whapped a giant egg-timer on the table to (gales of laughter) keep him from running on. But he has the gift of making his formidable intelligence attractive and personable and unintimidating; of emoting; of using the plain style in a way that seems uncontrived. Who was it who said that if you can fake sincerity, you’ve got it made?

MJ: Who, in your opinion, is the most effective living rhetorician and why?

SL: I regret to say I can’t really think of one. Obama’s capable of brilliance, but his very fluency and cool is—at least now as often as not—damaging to him as an orator rather than advantageous. He’s a good example—I mention him because he more or less made my book possible—of how everyone is only as good as his or her last speech. What that shows is that rhetoric is above all else situational: the same speech can be brilliant or useless depending on the audience and the timing (kairos is a key concept).

MJ: Do you see any stark general differences between contemporary British and U.S. public speakers?

SL: Good lord, yes. The absolute baseline of rhetoric—rule number one, in the matter of the ethos appeal—is the idea that you fit your speech to its intended audience. Fail to do that, and you get nowhere at all. Does the American electorate resemble the British electorate? Not at all. The political center ground there is way, way to the right of the political center ground here—at least inasmuch as “right” means a mistrust of the big state. So it follows that American rhetoric is more individualistic, less communitarian, and so on and so forth. It’s not just ideological, though. Certain national clichés—Brits as self-deprecating; Americans as self-confident—apply and persist. Boasting, of the Donald Trump sort, is less attractive to cringing Brits. We have an established church but our politicians “don’t do God” (as Alastair Campbell famously said of Tony Blair); America has a constitutional separation of church and state but no politician running for office can afford not to pay obeisance to the Almighty. And the cadences of the Bible (thanks inter alia to Martin Luther King) are wired into the USA’s political rhetoric in a profound way. We have a dialogic political culture—the back-and-forth across the despatch box at PMQs—where the US has a presidential one. As the former Blair speechwriter Philip Collins pointed out, “Yes We Can” would never have worked as a slogan in a UK context. We have a pantomime tradition. The opposition would have shouted: “Oh no we can’t!”

MJ: Which fictional literary character is the best, or at least most interesting rhetorician and why?

SL: This is one of those infinitely open and infinitely interesting questions. Every narrator is a rhetorician. Satan—as represented by Milton, in particular—is a wonderfully beguiling and thrillingly dangerous orator. He needs to be. So is Marlowe’s Mephistopheles. So, to come up to the modern day, is Humbert Humbert in Nabokov’s Lolita: morally void but intellectually so beguiling. It may say something–something discouraging—that the evil characters get the best rhetoric. Both George Steiner’s The Portage to San Cristobel of A.H. (in which Hitler gets to deliver an apologia) and Julian Barnes’s underrated The Porcupine (about an Eastern European communist leader on trial) make hay with that.

MJ: Do you think the language of rhetoric fools people into thinking these devices are bygone relics, when in fact we encounter them on a daily basis? For instance, enumeratio sounds like a spell from a Harry Potter book and epiplexis sounds like a medical condition, but we all frequently encounter both of these.

SL: No question. My slightly weak joke in the book is that they all sound like the bottles of grog you bring back from a Greek holiday. The point I think, is, that these are all devices that we use as naturally as breathing: you don’t have to know the word erotema to ask an estate agent: “Are you asking for a punch in the teeth, pal?” The great line from Molière’s Le Bourgeois Gentilhomme applies: “I’ve been speaking prose all my life without knowing it!”

MJ: Your book You Talkin’ to Me? is subtitled Rhetoric from Aristotle to Obama, but you begin your individual profiles with Satan. Did your publisher discourage including a Satan subtitle?

SL: Discourage? Hell, no. My publisher absolutely frickin’ loved the Satan stuff. To the extent that if you were to play a tape of one of my conversations with my publisher backwards you’d hear “Stairway To Heaven” by Led Zeppelin. Boringly, the reason is that “Aristotle to Obama” trips off the tongue better than “Satan to Obama.” The former can be read, at a push, as a trochaic tetrameter; the latter is metrical mud. Actually, what my publisher saved me from was calling the book (as I wanted to) “On Rhetoric” and giving it the subtitle “From Corax to Cartman.” It didn’t sell tons—but, Lordy be!, such sales as it had were in large part down to that decision.