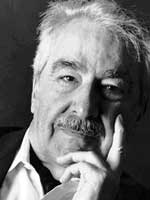 “If one of the functions of great fiction is to teach us how to live, in his depictions of nature and his descriptions of Maqroll, Álvaro fulfills that duty, without precepts, certainly without dogma, but by sacralized, yet worldly, example."—Edith Grossman, "Confessions of an Unreconstructed Romantic" (WLT, Vol. 77, July 2003)

Álvaro Mutis (b. 1923) is a Colombian poet, novelist, and essayist. Though he was born in Colombia, he lived in Brussels until he was eleven years old. His first collection of poetry was published in 1948 and his first short stories appeared in 1978. Mutis is best known for his award-winning novellas published in the United States in two collections, Maqroll and The Adventures of Maqroll.

In his nominating statement for Mutis, Colombian poet Huan Gustavo Codo Barto said, "The Colombian Álvaro Mutis is, without doubt, a contemporary writer who possesses a cultural background sufficiently broad and universal to transcend languages and borders." (WLT Vol. 77, July 2003)