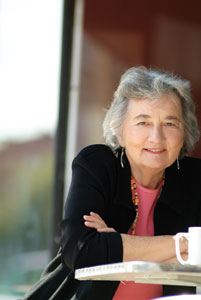 "Katherine Paterson articulates important, difficult, and urgent truths, all within the safe haven of her books and within a world, both real and imagined, which she modestly presents in her own wise and at the same time collective voice both on our behalf and for our benefit."—David Draper Clark, WLT May 2008

Katherine Paterson (b. 1932) was born in China, the daughter of Presbyterian missionaries who returned to the United States at the onset of World War II. Though her first language was Chinese, Paterson learned to read and write in English upon her family's return to the United States. She graduated summa cum laude from King College with a degree in English, which she applied to teaching children in fifth and sixth grades. Her first book, Who Am I? was published in 1966. Her first children's book, The Sign of the Chrysanthemum, was published in 1977, and began Paterson's very successful career writing for children. She is the author of more than thirty books, including fifteen novels for young people, and her works have been translated into more than twenty-five languages.

In his essay, "A Tribute to Katherine Paterson," nominating author Chris Crowe remarked, "Katherine Paterson's books have blessed children and children's literature by putting human faces on all kinds of characters. She's made marginal children seem less marginal, foreign children less foreign, and hopeless children more hopeful. In addition to elevating children's literature, Paterson's books and stories have also inspired readers to elevate themselves and their world." (WLT Vol. 82, May 2008)

In addition to her NSK Prize, Paterson was awarded the National Book Award twice (for The Master Puppeteer in 1977 and The Great Gilly Hopkins in 1979), the Newberry Medal twice (for Bridge to Terabithia in 1977 and Jacob I Have Loved in 1981), the Scott O'Dell Award for Children's Literature in 1982, the Hans Christian Andersen Medal in 1998, and the Astrid Lindgren Memorial Award in 2006.