I read Robert Shapard’s remarks about “flash” fiction in the September 2012 issue of WLT with a great deal of interest. Having spent quite a bit of time in my own career parsing minimalist fiction (and having published a book on that very subject several years ago), I was intrigued to learn that the objects of Shapard’s inquiry are typically far more brief than the ones that I was used to. Blink, and you miss them. For my part, I am convinced that it is fundamentally a question of brevity, that is, of the way a given artifact occupies time, rather than space. Certainly, pieces of this sort are small. They are composed of fewer words than garden-variety textualities, and they occupy fewer pages of print. Yet I believe that their pungency derives from the way our actual encounter with them plays out in time, an encounter so fleeting that it puts into question the way we read any text at all.

A lot could be said about that encounter, and about reading as a time-bound activity, but it is not my purpose to dilate upon those concerns here. For it also occurred to me that every minimalist gesture relies for its effect upon an implicit invocation of something quite different. In other terms, any brief text stages itself in opposition to lengthy texts, and it counts on our familiarity with the latter when it performs upon us. The tradition wherein I (mostly) work, French literature, offers a great abundance of lengthy texts, from its distant origins right up to our contemporary doorstep. Undoubtedly, the moment of the great maximalist novels has passed. I’m thinking here of experiments beginning in the early years of the twentieth century, and romans-fleuves such as Romain Rolland’s Jean-Christophe (10 vols., 1904–12), Roger Martin du Gard’s Les Thibault (8 vols., 1922–40), Georges Duhamel’s La Chronique des Pasquier (10 vols., 1933–41), Jules Romains’s Les Hommes de bonne volonté (27 vols., 1932–44), and of course Marcel Proust’s À la recherche du temps perdu (7 vols., 1913–27). Nevertheless, even these days, when we are called upon to live our lives at such an accelerated pace, there exists in France a vibrant current of literature that takes its time, narratives that are explicitly dilatory or “loiterly” (as Ross Chambers puts it), something one might call “slow” fiction, as opposed to “flash” fiction. I would like to point out just a few recent examples of that sort of writing, for the benefit of readers who might wish to leaven their flash readings with something a bit more leisurely.

Insofar as we readers are concerned, our path through the text is necessarily indirect, our advance slowed by the questions we inevitably ask: Where is this text leading us? What is pertinent, and what is impertinent? What is the part of fiction here, and where does the real intervene?

Christine Montalbetti is a writer who knows how to take her time. Her Journée américaine (2009) tells the tale of a young man named Donovan who is driving across the American continent from east to west, on his way to meet an old friend. Days spent behind the wheel can seem very long indeed, as everyone knows, and Donovan fills those otherwise empty hours with narrative, reminiscing agreeably, telling himself stories about this and that. Nothing particularly transcendent, merely the stuff of everyday life—or rather what passes for everyday life in a novel. He reflects, for instance, upon a football game that he attended, and the rhythm of his remembrance is pleasantly dilatory. It is interrupted at one point by a sudden shift of perspective, wherein the narrator invites us to share the point of view of a mosquito flying around above the crowd. But perhaps it’s not exactly a case of interruption. On the one hand, the story of the football game is not authoritative enough to be “interrupted”: it is merely one event among many that Donovan conjures up in order to pass the time. On the other hand, the digression that Montalbetti proposes is crucial, rather than anecdotal. In other words, it is deeply embedded in her narrative strategy, a strategy that seeks to persuade us to slow down just a bit, to linger if we feel like it, to take our time as we read. We would be wrong to swat Montalbetti’s mosquito, I think, for as he flits here and there, he points the way toward a less linear, more creatively digressive kind of reading, one wherein we have the leisure to poke around a little, and to find our own way as we do so. 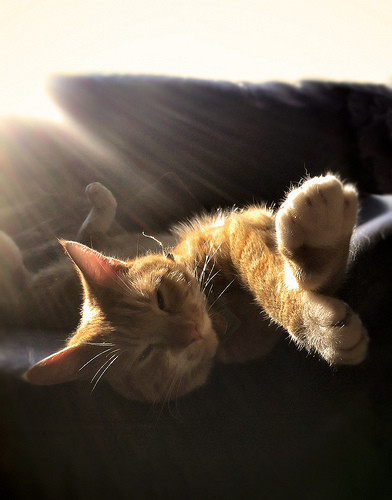 A “well-fed cat in a sunny room.” Photo by stumayhew/Flickr

In L’Explosion de la durite (2007; Eng. The Explosion of the Radiator Hose, 2011), Jean Rolin presents another kind of trip, one that takes place upon the sea at first, then upon some difficult African roads, where the incident promised in the title—the bursting of the radiator hose—finally occurs. Like Montalbetti, Rolin proposes a tale whose pace is studiously slow, a story that loiters first here, then there. In certain instances, the slowing of narrative pace is rationalized by mechanical breakdowns in the story, whether on the sea, in a ship that might have been piloted by Joseph Conrad, so ancient and decrepit it seems, or on land, in an Audi with 250,000 kilometers under its fan belt. In other cases, it is merely a question of the pleasure that taking one’s time can afford to both writer and reader. I say “merely,” but it’s no mere thing for Rolin. He offers those narrative slowdowns in a pointed manner, foregrounding them and privileging them, asking us to ponder them in a manner that is leisurely but nonetheless critical. Even his sentence structure testifies to his will toward extension; his sentences, wherein multiple clauses patiently succeed one another, stretch out on the page like well-fed cats in a sunny room. One cannot rush through them, nor can one predict where they will end up. The same is true, on a broader scale, of L’Explosion de la durite itself, and of the protagonist’s itinerary across land and sea. Insofar as we readers are concerned, our path through the text is necessarily indirect, our advance slowed by the questions we inevitably ask: Where is this text leading us? What is pertinent, and what is impertinent? What is the part of fiction here, and where does the real intervene? What in the world is a radiator hose? And so forth, passing our time in order not to feel time passing.

Following Pura Vida (2004) and Equatoria (2009) in what looks for the moment like a trilogy that circles the world at the equator, Patrick Deville’s Kampuchéa (2011) is a truly astonishing piece of work. Not least because, after launching his career in the late 1980s at the Éditions de Minuit as a committed minimalist, Deville retooled, as it were, and began writing books of a very different stripe. The notion of difference is clearly inscribed in this book’s title, which seems opaque to us until we realize that Deville has used the Khmer word for “Cambodia.” He gives us a world that is very different from the one we think we know, and his manner of presentation is extremely various. Mixing history, politics, geography, cultural commonplace, personal testimony, and participatory journalism, Deville sketches a panorama of Cambodia from the Western “discovery” of Angkor Wat in 1860 to the trial of the notorious Khmer Rouge leader Kang Kek Iew (or “Duch”) in 2010. One never knows quite where one stands in this text. But of course that’s one of the points that Deville wishes to make about contemporary Cambodia—and perhaps about contemporary literature as well. We make our way through Kampuchéa in a roundabout, meandering fashion, following paths that Deville blazes for us. Like Christine Montalbetti, like Jean Rolin, Patrick Deville wagers upon a deliberately dilatory textuality, and he encourages us again and again, through effects both implicit and explicit, to slow down and to look around ourselves while we read.

Even as I take that advice to heart, I think I should point out that, apart from the fact that each of them insists on the idea of “slowness,” these three texts are quite different. Indeed, despite the epithet “slow fiction” that serves to organize my discussion, it is by no means certain that each of these books can be thought of as fiction. Most certainly, they are not equally “fictional.” Journée américaine is patently a novel (even if the attentive reader of Montalbetti might wish to see a marked autobiographical dimension therein), but L’Explosion de la durite plays with our idea of what a novel is and can be, and Kampuchéa puts fiction on trial even more dramatically, inviting us to imagine a new kind of novel, one that announces itself as essentially nonfictional. It seems to me that those questions, and others bound up in them, are richly deserving of our attention. Yet they are not questions that can be answered easily—nor are they ones that should be addressed in haste.

Warren Motte is Professor of French and comparative literature at the University of Colorado. He specializes in contemporary writing, with particular focus upon experimentalist works that put accepted notions of literary form into question. His most recent books include Fables of the Novel: French Fiction since 1990 (2003) and Fiction Now: The French Novel in the Twenty-First Century (2008).

Editorial note: For more on dilatory reading, see the summer 2012 issue of Comparative Literature, which includes Stefano Ercolino’s article on “The Maximalist Novel.” The novels he discusses are defined not just by length but by their encyclopedic quality and what he calls “the paranoid imagination,” including Thomas Pynchon’s Gravity’s Rainbow, David Foster Wallace’s Infinite Jest, Don DeLillo’s Underworld, Zadie Smith’s White Teeth, Jonathan Franzen’s The Corrections, and Roberto Bolaño’s 2666.