Surrendering to the Unsaid 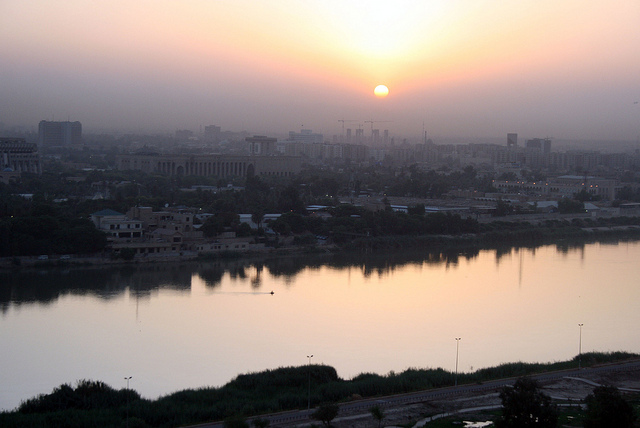 For nearly two years, I worked on poems about my father’s early years in Baghdad. Every now and again, I slipped an occasional question to my dad, hoping that he would help me access the sphere of his life that came before I knew him. My questions were delivered mostly via email because my phone and in-person queries went unheard.

For generations, the Jews of Iraq were peers with their Arab neighbors—equals in civic life, finance, the judicial system, commerce, and other arenas. There was peace in the land. My father might have seen some of this, and if not, his father certainly did.

After World War I, the British Mandate defined territorial limits, which mashed up ethnic and religious groups in the country. Suddenly, the Arab Sunnis and the Shi’as were a little too close for comfort, and power struggles followed. As if this wasn’t problematic enough, during World War II, the leadership of the country aligned with Nazi sympathizers; the Jews were doomed.

My manuscript, One Hundred Hungers, began to feel more substantial when I learned of one particular incident, the “Farhud,” which translates literally to “the dispossession.” This two-day massacre—looting, raping, arson, and killing of the Jews of Baghdad—took place on June 1 and 2, 1941. My father, the eldest male in a Jewish family, was nearly six years old. I wanted to know, from him, what his homeland was like. I wanted to hear him describe it.

But Dad either shunted my questions to other relatives or, more frequently, ignored my requests. I was careful not to probe into dark areas. In fact, my questions were designed to be light: Who took you to school? Did you wear uniforms in class? I asked for the smallest details I could imagine that might open him up enough to tell me about the culture he’d left sixty-two years ago. I never asked about the pogroms, the hatred, the choked relations between Muslim Arabs and Jewish Arabs.

Other parents relent if you push hard enough. People have told me this. After all, what person doesn’t like to tell his stories? But, honestly, my father is different. Doesn’t matter if I ask the right genealogical question, the one that I suspect will magically launch him backward in time, exploring old alleys and riverfronts. Doesn’t matter if I sit at his feet and look up expectantly, adoration in my eyes. None of that works.

My father just won’t speak about any of this. His greatest interest is Now.

After two years of gentle inquiry, I realize that he has probably forgotten much of what he may have tried to suppress all those years ago. I’m sure long-hidden viewpoints and discomforts stop meeting you if you no longer go to the corner to find them.

On the day I was wrapping up the manuscript, checking commas and semicolons, and every last fact and Arabic word, I was riddled with uncertainty. Because Arabic isn’t my language, I had trusted others on translations of terms. The answers that came back to me from various sources were jagged and mismatched.

I wanted a person, one person only, to iterate the thick sounds of Arabic. I wanted, after all my imaginings and research, to “hear” the language. I called my dad on his cell phone. He was in the Ikea parking lot in northwest Philadelphia. I was worried that he would be angry about my needling, but I sucked in my breath and asked him to count from zero to three in Arabic.

The words came forward, blown from the back of his throat, pushed in ways I hadn’t imagined. Even though he voiced what I had written down, the words seemed different, the language immediate and alive.

I asked another question: Is this how you say date trees? He affirmed, pronouncing the words thickly.

He answered three questions, maybe four. I felt lucky. His words matched or differed from what I had written. That didn’t matter. I trusted what emerged from his mouth. I chewed those words, pulling flavors from them. I repeated back to him, and he laughed at my inability to cough out such harsh sounds. I swallowed—and they became language, food.

Then I asked a final question, a phrase that is in the last poem of One Hundred Hungers. I asked, How do you say, “I’m sorry?”

I waited as he wandered his Arabic memory, as the sun rose and set on the Tigris. “I don’t know,” he said, without emotion, before turning to a subject on the surface of today, something he cared about now—a cheap sofa, or a cup of coffee. “We never said that.”

Editorial Note: Read two of Lauren Camp's poems in the January 2013 issue of WLT, as well as two web exclusive poems for the January issue online.