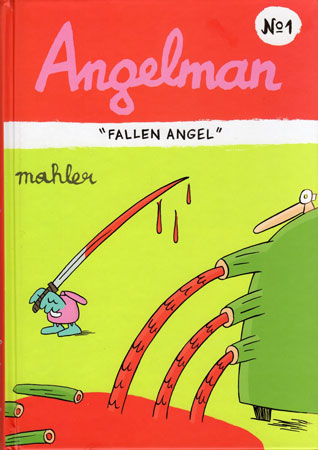 WLT: The Fantagraphics website describes Angelman as “easily the funniest super-hero comic to come down the pike since Harvey Kurtzman and Wally Wood’s Superduperman!” Does translating humor present any unique challenges?

Kim Thompson: Humor is far more difficult to translate than anything else. If you translate a dramatic sequence and your words or rhythm aren’t quite right, it still can work. If you do that for comedy, it usually ruins it. And of course, puns can be a huge problem. But for whatever reason I find Mahler’s work pretty easy, maybe because my “voice” is very close to his. There are other humor books I’ve found far more challenging.

WLT: Which was your most challenging and why?

KT: The Swedish daily comic Rocky was fiendishly difficult because there was a lot of not just European-specific or even Swedish-specific but even Stockholm-specific material. And his characters had enormous dialogue balloons full of meticulously sarcastic dialogue that would "flatten out" if you didn't get just the right amount of snark in it. Lewis Trondheim's autobio-driven comics are difficult, too, for the same reason of finding that day-to-day tone (whereas the fantasy book of his we just released, Ralph Azham, was a breeze—so the difficulty is not cartoonist-specific).

On the other hand, you might expect that my Adèle Blanc-Sec translations, which are in this orotund, old-timey, sesquipedalian style, would be difficult, but you’d be wrong: That kind of stuff I can crank out virtually off the top of my head, no doubt because of childhood exposure to Stan Lee Thor comics and P. G. Wodehouse. Basically, each job has its own challenges, and sometimes the level of difficulty or ease is unexpected.

WLT: Were there any cultural references that were particularly hard to translate in Angelman?

KT: Not really. Super-hero comics are so global-leaning-American that there was very little specifically Austrian in the book. Apparently global evil soul-sucking megacorporations are the same the world over, which makes sense because they’re global. I’ve translated Mahler’s autobiographical strips about his life as a cartoonist, and those are more difficult because there is Austrian-specific material in there, culturally speaking.

WLT: You’ve translated many comics, and from several languages. Did Angelman present any new challenges?

KT: Aside from the ever-present difficulty of nailing the humor, no. I had to rethink a few punning names (“Lady Dentata" was entirely mine, the original German being an untranslatable pun), but that's about it. It was pretty smooth.

WLT: Did your translation from German to English result in any changes in the layout, for instance the style of the word balloons?

KT: No. English is among the most succinct of languages, so it’s almost always easy to fit the translated text in the available space. I may have needed to tweak one or two balloons here and there. (Replacing all the “e”s for Engelmann with “a”s for Angelman on the costume was a pain in the neck, though. Thank god we’re in the digital age; twenty years ago that would have been virtually impossible.)

WLT: I read at one time that 10 to 15 percent of Fanatagraphics’ publications were translations. Has that number changed?

WLT: Does Fantagraphics have any plans in 2013 to publish any writers who have never before been published in English translation? Are there any exciting debuts we can begin looking forward to?

KT: Sure. We're doing a graphic novel by Swedes Lars Fiske and Steffen Kverneland, a collection of cartoons by the Dane Storm P, a graphic novel by the Italian Manuele Fior, and a graphic memoir by the Austrian Ulli Lust. All four books (five cartoonists) qualify as never-before-in-English although a chapter of Olaf G. was published in an English language anthology.