Writing with the Left Hand 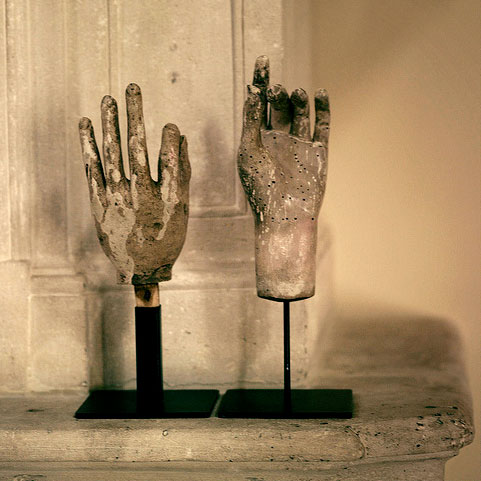 In the throes of illness, French philosopher Hélène Cixous sees a version of herself—struck with a cancer of the hands—and realizes that the only cure is to cut one off. It is only a dream, which she vividly describes in her essay “Coming to Writing.” Still, the nightmare is very real, and she summons the courage to say: “You have two hands. If one hand can’t live, cut it off. . . . You’ve lost the hand that writes? Learn to write with the other hand.”

At first she begins by tracing what had been written with the lost hand—and then, to her great surprise, she watches as “at once there unfurls a perfect calligraphy, as if she had always had this writing in that other hand” (8). The scene she describes here aptly applies to the idea of translation, where the work of the translator is represented by the other hand—the one that must first learn to trace what has already been written, and then must stray from the act of merely tracing, in order to unfurl an (im)perfect calligraphy.

It is a cliché to state that the work of a literary translator is difficult and riddled with uncertainty, regardless of how well the translator knows the languages with which he or she is working. To anyone who has struggled over a phrase or a sentence for an hour or more, the violent image of cutting off one’s hand and attempting to write with the other seems more apt than Arthur Schopenhauer’s more cerebral description of the confusing labyrinth of meaning and signification between two distinct forms of linguistic expression that translators face. He writes, clearly enough, but one step removed from the frustration inherent in the task: “Not every word in one language has an exact equivalent in another. Thus, not all concepts that are expressed through the words of one language are exactly the same as the ones that are expressed through the words of another. . . .” (32). There would seem to be a great difference, then, between an original text and even the best-rendered translation. But is that difference necessarily detrimental to a given work of literary art?

In other words, if I, as a right-handed translator, cut off my right hand and use only my previously untrained left hand to write, will my end result be affected?

Schopenhauer describes translation as a type of transposition: moving a literary line of music from one key to another. “Even in the realm of prose,” he writes, “the most nearly perfect translation will at best relate to the original in the same way that a musical piece relates to its transposition into another key” (33). It is, in many ways—and like translation—paradoxically the same but also different.

Cixous is perhaps most famous for her theory of l’écriture féminine, which, after reading her descriptions, seems to be translation’s sister, or at least her second cousin once removed. In her essay “The Laugh of the Medusa,” she writes, “It is impossible to define a feminine practice of writing, and this is an impossibility that will remain, for this practice can never be theorized, enclosed, coded. . . .” (353). Mexican author Carmen Boullosa also notes that “there is a feminine way of writing, of perceiving reality, and of understanding life.” But she also gives us a new perspective on what that might include when she notes that Proust is the best woman writer in the history of the world; the feminine way of writing, she concludes, “is not exclusive to the province of women” (180).

Or, rather than being related processes, perhaps translation and l’écriture féminine are parallel processes. No longer second cousins, they are identical twins separated at birth and sent to different countries, à la Octavio Paz’s theory of translation and creation. Where feminine writing brings the work of the “other” (woman) into masculine discourse, translation similarly brings the work of the “other” (a foreign text) into the discourse of a distinct language. In both cases, tradition and convention must be adhered to, broken with, and manipulated in order to fully express the other.

The expression of the other—specifically, in literature—is often defined by the inherent multiplicity of meanings that a given text presents to the reader. Octavio Paz writes that while the words of a given work of literature are unique and permanent, their meanings are plural and changeable. His ideas correspond, in many ways, with Cixous’s reflection on the relationship between two distinct subjects further on in “The Laugh of the Medusa”:

A good translation must preserve these plural meanings—multiple and inexhaustible as they are—in a new language, which in many ways serves as the in-between of which Cixous speaks. It stands to reason, then, that while it may be difficult, creating a translation of a literary text of equal (or near-equal) literary value to the original is possible despite the restrictions inherent in the act of expressing otherness (the foreign quality of a given text) in a new language.

That is, perhaps, if one is willing to commit the violent act of cutting off one hand and learning to write with the other.

Schopenhauer, Arthur. “On Language and Words.” 1800. In Theories of Translation: An Anthology of Essays from Dryden to Derrida. Ed. Rainer Schulte & John Biguenet. Chicago: University of Chicago Press, 1992. 32–35.

Kristina Zdravič Reardon translates from her grandparents’ native Slovene and Spanish. WLT will publish two pieces of short-short fiction translated by Reardon in its September issue.