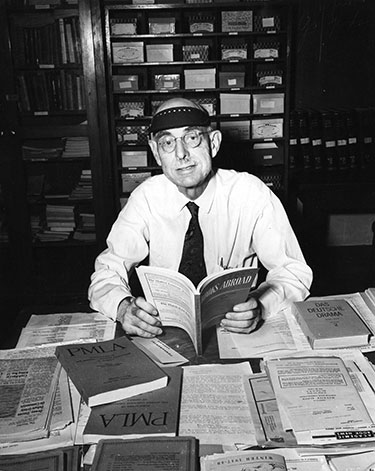 World Literature Today was founded as Books Abroad in 1927 by Roy Temple House (1878–1963), a scholar of vision from the University of Oklahoma. In a letter to OU president William Bennett Bizzell, Dr. House explained his founding vision for Books Abroad and requested a startup budget of $150 for the first two issues. With characteristic modesty, he wrote: “. . . I know our little magazine will be useful in various quarters. A good many of us, I think, are coming to feel strongly that the University of Oklahoma must begin fostering contributions to the scholarly and cultural activities of the nation” (October 21, 1926). For the next 22 years, Professor House nurtured the fledgling journal, and in 1948 he was endorsed by his colleagues for the Nobel Peace Prize for his service as an “ambassador of international cooperation and goodwill.”

Dr. House devised as the journal’s logo a full-rigged ship with the motto Lux a Peregre—“Light from Abroad” or (as we choose to interpret it) “The Light of Discovery.” While the journal has always served as a harbor for ships—foreign books—from abroad, it also functions as a lighthouse that reflects back the light it receives, which has also been an essential part of our mission. From a modest seedling of 32 pages in January 1927, Books Abroad grew to 256 pages by the end of its fiftieth year (Autumn 1976), and that year's cover design reflected the completion of a significant circle. In January 1977 the journal became known as World Literature Today, reflecting the truly international range that its coverage and reputation had acquired.

Now in over 95 years of uninterrupted publication, WLT is one of the oldest continuously published literary periodicals in the United States—along with other such publications launched in the early twentieth century as South Atlantic Quarterly (1902), Poetry (1912), and the New Yorker (1925)—and we remain devoted to our mission of serving students, scholars, and general readers worldwide. For years, a quotation from Goethe appeared on our masthead: “These journals, as they reach a wider public, will contribute most effectively to the universal world literature for which we are hoping. There can be no question, however, of nations thinking alike. The aim is simply that they shall grow aware of one another, understand one another, and, even where they may not be able to love, may at least tolerate one another.” Goethe’s words, first published in 1828, remain at the heart of our mission, even—or perhaps especially—in a world that has become increasingly globalized in the 21st century but remains fraught with national, linguistic, and political divisions.

Created by the Oklahoma Territorial Legislature in 1890, the University of Oklahoma is a doctoral-degree-granting research university serving the educational, cultural, economic, and health-care needs of the state, region, and nation. The Norman campus serves as home to all of the university’s academic programs except health-related fields. Administratively, WLT is supervised by OU’s senior vice president and provost, Dr. André-Denis Wright. For more information about the university, visit the OU home page.

Take a journey through World Literature Today’s long and storied history through the interactive timeline below. Discover how the magazine became “an instrument of peace as well as an instrument of culture” and see how its establishment of the Neustadt International Prize for Literature and the Puterbaugh Festivals has affected the University of Oklahoma, the city of Norman, and the entire world by promoting contemporary international literature from every corner of the globe.