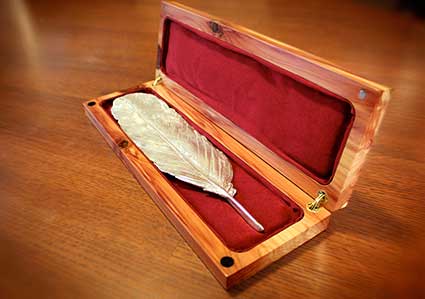 The Neustadt International Prize for Literature is a biennial award sponsored by the University of Oklahoma and World Literature Today.

The prize consists of $50,000, a replica of an eagle feather cast in silver, and a certificate. A generous endowment from the Neustadt family of Boston, Dallas, and Denver ensures the award in perpetuity.

Visit www.neustadtprize.org to see all previous winners, finalists, and jurors for the Neustadt International Prize for Literature, learn more about the prize, and stay up-to-date on all the latest in regard to laureates, convening juries, the annual literary festival, and recent news.

A new international jury of outstanding writers is selected to decide the winner of each Neustadt Prize in odd-numbered years. The members of the jury are determined by the executive director of World Literature Today (who is the only permanent member) in consultation with the journal’s editors and the president of the University of Oklahoma. Each juror nominates one author for the prize. The jurors convene for two to three days at the University of Oklahoma for their deliberations, and the winner is announced at the banquet honoring the laureate of the NSK Neustadt Prize for Children's Literature. A special ceremony in the laureate’s honor is then held the following year, and the writer’s life and work are subsequently profiled in a special issue of WLT.

The charter of the Neustadt Prize stipulates that the award be given in recognition of outstanding achievement in poetry, fiction, or drama and that it be conferred solely on the basis of literary merit. Any living author writing in any language is eligible, provided only that at least a representative portion of his or her work is available in English, the language used during the jury deliberations. The prize may serve to crown a lifetime's achievement or to direct attention to an important body of work that is still developing. (The prize is not open to application.)

One indication of the prestige of the Neustadt International Prize for Literature is its record of 34 laureates, finalists, or jurors who in the past 51 years have been awarded Nobel Prizes following their involvement with the Neustadt Prize, with only one exception: José Saramago (Portugal), who was a Nobel Prize recipient before being considered for the Neustadt.