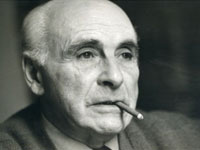 "Verbal humor is one of the more obvious features of Ponge's style. It runs the whole gamut of word play, down to the outrageous sort of pun customarily greeted with a groan. In part, this carries on the systematic surrealist destruction of conventional literature."—Micheal Riffaterre, "Francis Ponge's Poetic of Humor" (Books Abroad Vol. 48, Autumn 1974)

Francis Ponge (1899-1988) is a French essayist and poet. He was born in Montpellier and studied at the world-renowned Sorbonne. His first poems were published as early as 1923, and it would be through these publications that he introduced his distinct poetic style. His style of prose poetry (he often refered to this style as proêms) features meticulous descriptions of natural, everyday objects in lyric prose form.

In his presentation of Ponge to the Neustadt jury, nominating author Michel Butor remarked, "Ponge tries to be as classical as possible, as is quite manifest in a first reading of his book on Malherbe, but he cannot help being adventurous, and the result is that his experimentation is always at once daring and deeply justified, discreet and decisive," (Books Abroad Vol. 48, Autumn 1974).

In addition to his Neustadt Prize, Ponge received the French National Poetry Prize in 1981 and the Grand Prix of the Société des gens de lettres in 1985.